A villain in paradise

Democracy is at stake in the Maldives, spectre of radical Islam looms large. India must act soon and firmly 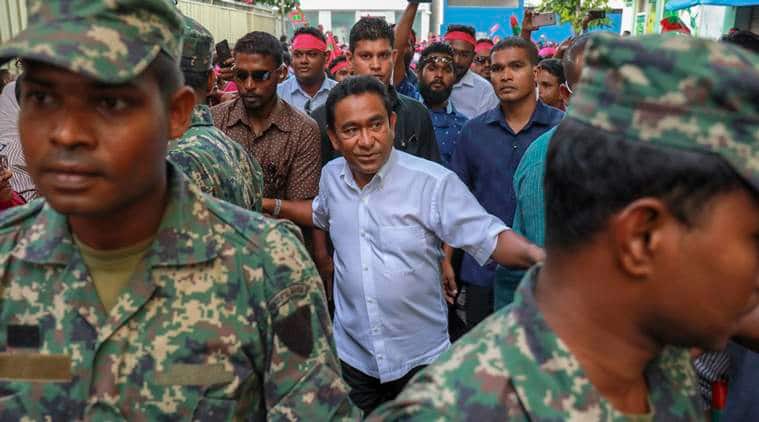 After four years of democratic rollbacks, human rights abuses, and foreign policy adventurism, last week’s good news from the Maldives has been overtaken by a new and dangerous turn. Emergency has been imposed and former president, Maumoon Abdul Gayoom, now 80 years old, as well as the Maldivian Chief Justice, have been arrested.
The Maldives is hurtling towards a new crisis, one that I fear will take a very long time to recover from. Not only is democracy at stake in our tiny island nation in the Indian Ocean, a mere 400 km away from India, but the spectre of radical Islam looms large over our paradise. As for President Abdulla Yameen, he has demonstrated his naked ambition to remain in power at all costs.

As the largest democracy in the world and the leading player in the region, India has surely kept a watchful eye on goings-on in the Maldives and been in touch with all sides. Only a few weeks ago, India received the Maldivian foreign minister, also a special envoy of President Yameen, who reiterated the government’s “India First” policy. But Yameen has not only shown, through his actions of the last few days, a total disregard for the democratic code India swears by, he has also imperilled the Maldivian Constitution itself.

The Maldivian people fought long and hard for the right to hold free and fair elections, and won it only as recently as 2008. But soon after I lost power in the second round of a controversial run-off in the 2013 elections — which I believe was rigged because I had won the first round conclusively — I was thrown into jail, and in 2015, exiled from my beloved country. I have since lived as a refugee, between London and Colombo, waiting for the day I can return home.

Last Thursday, it seemed as if that day was near, when the Maldives Supreme Court ruled that all political leaders, including myself, must be immediately freed because our trials were politically motivated and illegal. The apex court also declared that 12 Opposition MPs who were removed from their seats last year must be reinstated, giving the Opposition coalition control of the parliament, a body that has the power to impeach the president.

The ruling was welcomed by the international community. India, the United States, and the European Union have called on President Yameen to immediately implement the ruling.

But Yameen clearly has other ideas. In his endless quest to enrich himself, he has sold off the nation’s sovereignty. Foreign powers, among them China, are engaged in a “land grab” of Maldivian islands, key infrastructure, and even essential utilities. Shrouded in secrecy, all manner of projects have been awarded to foreign state-run companies. The cost of these projects to the Maldives are outrageously inflated, allowing regime cronies to line their pockets, while future generations of Maldivians are saddled with gigantic debts they will never be able to repay. This land grab not only undermines the independence of the Maldives, but the security of the entire Indian Ocean region.

China’s interest in the Maldives grew in the context of its “One Belt, One Road” (OBOR) project. When Chinese president Xi Jinping visited the Maldives in September 2014, the government joined one of OBOR’s two components, the Maritime Silk Road Initiative, a major component of which entails the building of enormous amounts of hard infrastructure such as air and sea ports, oil and natural gas pipelines and telecommunications networks. China agreed to help finance the “China-Maldives friendship bridge” which connects Malé to the international airport in Hulhumalé. The project is reportedly financed by US$126 million in grant aid and a concessionary loan from China, together with US$12.6 million from the Maldivian state budget.

In 2014, the government also introduced the Maldives Special Economic Zones (SEZ) Act, only a day after the then vice-president flew to China to attract investors. In 2015, President Yameen introduced the Foreign Land Ownership Reform, which allows for absolute foreign ownership of land in the Maldives. And in 2017, he flew to China to sign the free trade agreement that had been cleared at home against all parliamentary procedures and norms.

The development of the Ibrahim Nasir international airport is a case in point. President Yameen has revealed a plan to finance the project through $800 million worth of foreign loans — in 2014, China’s EXIM Bank gave a $373 million concessionary loan to upgrade and develop the airport, while in 2016, the Saudi Bin Laden group was awarded a project to construct a new passenger terminal at a project cost of a US$500 million, but without a proper bidding process.

As I watch my country in exile, I fear that, piece by piece, island by island, the Maldives is being sold off to China.

Democracy in the Maldives matters. It’s not just a question of human or civic rights. Under President Yameen, religious radicals have quietly moved into key positions in the government, security services, and institutions. There is now a “state within a state” — a network of radicals lurking in the shadows, waiting to overrun the country. This network is suspected of carrying out, and covering up, recent unsolved murders of Maldivian human rights defenders.

Moreover, in 2016, the government passed the Defamation and Freedom of Speech Bill which legalises the incarceration of journalists and allows the imposition of severe penalties on those seeking to exercise freedom of speech.

It is essential that India leads the international community in forcing President Yameen to comply with last week’s Supreme Court order. This will pave the way for genuinely inclusive, free and fair elections with full international monitoring. If the Maldivian people so wish, they will then be afforded the chance to throw out this corrupt and criminal regime that is selling the country out from under their feet.

If President Yameen refuses to comply with the Supreme Court ruling, his regime will lose the last vestige of its legitimacy. The Maldives will descend into instability, constitutional crisis, and chaos. This is certainly not in the interests of the Maldivian people, their friends and well-wishers. We look towards India, our neighbour and ally, to act soon, and to act firmly. Mohamed NasheedNasheed, former president of the Maldives, was elected in 2008 ... read more