The temples of justice are also home to moments of laughter. These are just a few instances to illustrate fun and games in court in which both lawyers and judges are participants.

Courts are regarded as temples of justice, where proceedings are conducted with solemnity in a forbidding atmosphere. Yet there are lively humorous moments showcasing both lawyers and judges.

C.K. Daphtary, who later became the attorney general of India, was arguing a case relating to stock exchange transactions before Justice Somjee in the Bombay High Court. It was generally known that Daphtary had dabbled in the stock exchange and lost heavily. During arguments, Daphtary insisted on putting a relevant question to a witness but the judge did not permit that and, moreover, made a nasty remark, “Mr Daphtary, you would of course be very familiar with stock exchange matters.”

Daphtary kept his cool. Later when a law reporter cited before the judge was not in the judge’s library and therefore handed over from the Bar, the judge testily remarked, “Mr Daphtary, there is a bug in the law reporter.” Daphtary retorted: “My lord, this is not the first time that a bug has travelled from the Bar to the bench”. There was stunned silence in the court as Justice Somjee, who was appointed from the Bar, sank into gloomy silence. There was widespread appreciation of Daphtary’s memorable retort.

There was an advocate in the Bombay High Court who was very proud of his name, “Servulus Baptista”, so different from common Christian names. Chief Justice Tambe, in the course of delivering an oral judgment, could not locate the exact page of the law reporter that was cited. He looked at Baptista, who had appeared in the case, and loudly asked, “Lobo, what page?”

A crestfallen Baptista gave the page number. Minutes later, Justice Tambe was prevented by his brother judge on the bench from repeating his mistake about the name. Thereupon, with a beaming smile, Justice Tambe told Baptista, “There was an advocate in Nagpur called Lobo, so I called you Lobo”. The chief justice’s explanation was poor consolation for Baptista, who was thereafter greeted by naughty lawyers with cries of “Lobo, Lobo” in the Bar library and at the Bar Association.

The first passport case, Satwant Singh Sawhney vs Union of India, was heard by a Constitution bench of the Supreme Court presided over by the great citizen judge, K. Subba Rao. Justice C.A. Vaidialingam, who was a member of the bench, was singularly silent during the proceedings. I was arguing the case. Lawyers in court challenged me to break Justice Vaidialingam’s monastic silence and promised me a princely sum of Rs 100 (the year was 1967) if I succeeded. I resorted to the expedient of asking, in the course of my arguments, “Has my Lord Justice Vaidialingam got a copy of my written submissions.” The judge replied in three words. “Yes, I have.” The silence was definitely broken but I was not paid the promised sum because just three words were not considered sufficient.
There was a hilarious episode before the then Goa bench of the Bombay High Court.

A probationer had challenged his termination in his writ petition on the ground that he was not heard before the order was passed and the principles of natural justice had been violated. Appearing for the department, I argued that when probation is terminated, according to its terms, there is no requirement for prior hearing unless any aspersion of inefficiency or unpunctuality or laziness is cast on the probationer.

The argument appealed to the judge, who asked the probationer’s counsel, “Show me where has the department called your client a lazy bugger.” The probationer’s counsel vehemently argued and said that he would rely on several Supreme Court judgments to support his case. But the learned judge persisted in his query. On the pretext of going to the washroom, I left the courtroom, laughed my sides out in the corridor and returned after two minutes to find that the lazy-bugger duel was going on. The judge dismissed the probationer’s writ petition on the ground that there was no material on record that any aspersion was cast on the probationer that he was a lazy bugger.

These are just a few instances to illustrate fun and games in court in which both lawyers and judges are participants.

The writer is a former attorney general of India 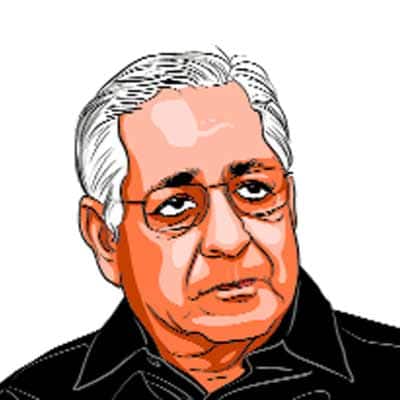