India can become a global hub for higher education. Much can be achieved without government having to do the heavy lifting India can become a global hub for higher education. Much can be achieved without government having to do the heavy lifting (Illustration: C R Sasikumar)

A longstanding proposition in economics, under the label of “industrial policy”, emphasises the importance of the government choosing special sectors to focus on and incentivise. The expectation is that this will create enough spillovers to drive up overall growth. Industrial policy has had its share of demurrers, arguing that the state should not get into picking winners and losers; but the fact is that it has been used to great effect by Britain, Germany and other nations during the Industrial Revolution and by China in recent times.

Without entering that debate, I want to point to two areas where the Indian government should put in special effort: Medical tourism and higher education. India made huge strides in the former in the early 1990s, but this sector seems to be running out of steam, with other emerging nations taking the lead. We need more effort here. The other sector where the prospect is big is a global hub for higher education. In both these sectors, much can be achieved, without the government having to do the heavy-lifting. Given my own expertise, I focus here on the second.

From ancient Greece to 19th century Britain and 20th century United States, there is evidence that when nations do well in higher education and research, they do well in economic development. For historical reasons, India has a huge strength here. First, while India’s colonial history did plenty of harm, it conferred one advantage. When leaving India, luckily the English could not take away their language. English is the world’s most important language and India’s strength in it is a natural advantage today. Second, thanks to the far-sightedness of India’s founding fathers and, in particular, Jawaharlal Nehru, India took major steps in nurturing higher education and scientific temperament, setting up the IITs, the IIMs, and promoting some fine universities.

One can see the advantage this history has conferred from indirect data. America has a large Study Abroad programme under which its students take a break from their home universities and go to other countries for education. In 2014-15, 3,13,415 students went abroad under this scheme. The biggest destination is the UK — 12.2 per cent of the students went there — followed by Italy (10.8 per cent) and Spain (9 per cent). What is surprising is India does not do too badly on this. It is the 14th most popular destination (1.4 per cent).

If we can build on these strengths and create room for private universities and institutes to flourish, India can become a destination for students from around the world. This would not be a charitable act. The aim should be to provide high-quality education and charge international students the full fee for this (though I would recommend subsidies for students from poor countries).

Private firms that invest in this sector will need some flexibility on how much they charge and what salaries they pay. In the US, universities compete to attract the best professors and so salaries vary vastly. I wish the world were not like this but it is and, to succeed, India has to give this freedom to the private universities. Some of these universities, it is likely, will start up partnerships with universities in the US, UK and elsewhere, and that should be welcomed.

In the US today, in many good universities, annual tuition fees are above $60,000. If Indian universities are given the freedom, they could charge, say, $20,000, provide comparable education and still make a profit. For a four-year education, this means a saving of over $1,60,000 to the student. It is likely that students would come to India not just from developing nations but also rich countries. The big advantage of this is that the government does not have to do much beyond creating an enabling environment. The return on this investment will be enormous.

Often, our biggest plans flounder not because of big mistakes, but because the nuts and bolts are not in place. The government has to pay attention to the little matters. For example, students should be able to get visas for their two-, three- or four-year study at one go. No one will want to come here, however good the education, if he or she is at the mercy of the bureaucrat in the visa office every six months. There are nowadays retrogressive groups trying to take India backwards in the name of Hindutva. They will have to be restrained from shaping curricula if our institutes of higher learning are to flourish.

There is enough enterprise in India and enough profit potential in this sector that private universities will crop up and do the actual delivery once the government provides this basic ethos. As Ratan Tata wrote in the Oxford Companion to Economics in India, if the right policies are in place, India can “leverage the country’s scientific and engineering talent pool to create value”.

Of course, regulation will be needed but the main aim of the regulation must not be to control salaries, curricula, and speech on campus, but to ensure that students are not cheated. Several of India’s private teaching institutes mislead students by giving them false information about their placement record and tuition costs. Some of them let students in for a small fee and then raise charges midway through the education. We will need intelligent, lean regulation to deter such behaviour.

In this new setting, the quality of universities will vary, with only a handful being of top international standards. That is unavoidable. If we try to have 800 universities (as of February 2017, India had 789) of uniform standard, they can only be uniformly mediocre.

It is true that the private universities are likely to cater to education in the commercially more lucrative disciplines, whereas a nation’s advance also depends on literature, poetry and pure mathematics, which have little immediate commercial value. The advantage of the nation becoming a global hub for education is that this can yield so much income that the government can then take the responsibility of providing these other kinds of education to its own citizens. The government should also take the responsibility to ensure that all Indians get education, taking account of the fact that many are so poor that they will have to be provided education for free.

But even with these caveats, the investment-to-return ratio for the government in the education sector can be disproportionate. Few other sectors can match it. 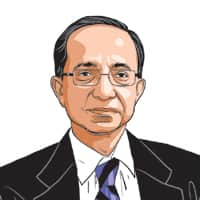