20th Congress of CPC: The making of the One Leader Country

Xi Jinping had already become the Party. With his colleagues hanging up their boots due to tenure restriction, he will be the sole leader of Government too. His next target is the Nation 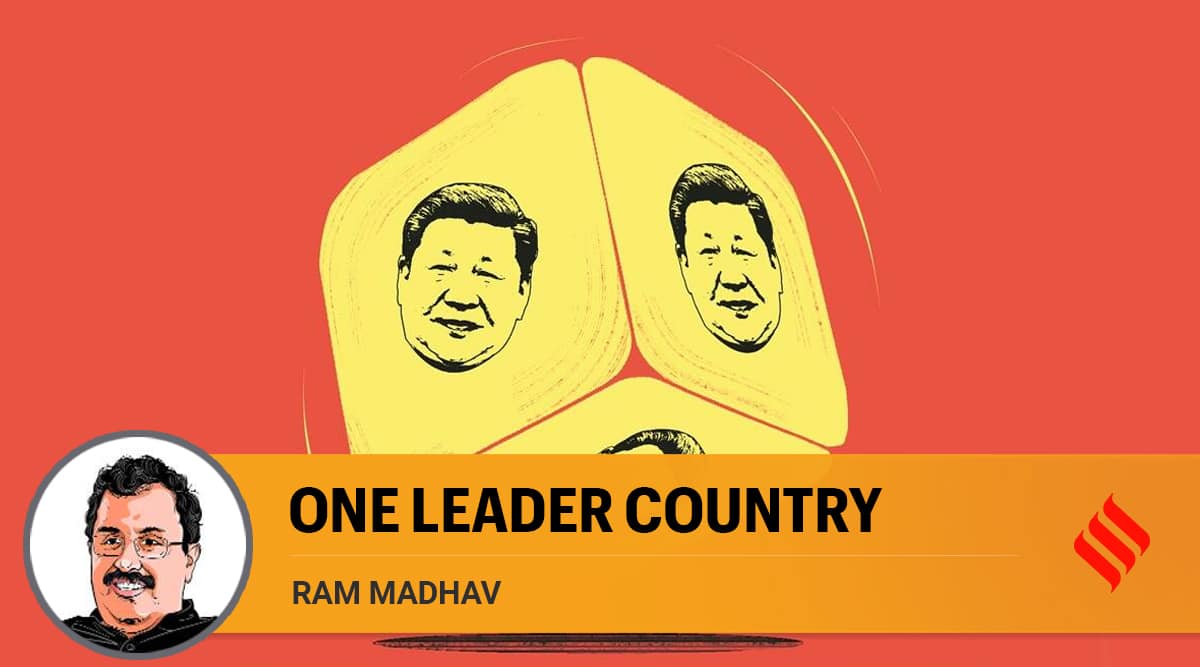 Xi, in his address to the Congress, made it clear that socialism and “common prosperity for all Chinese people” will remain his economic goals, much to the chagrin of Keqiang’s clique of economic liberals. (Illustration by C R Sasikumar)

Although the 20th National Congress of the Communist Party of China (CPC) has attracted enormous attention, it is clear that, like in the past, this session too will be a tightly choreographed affair. With everything decided during the run-up and the Congress merely rubber stamping it, one can only draw inferences from the visuals and the main address of Xi Jinping. There is a method in the Xi Jinping model. In his plenary address on October 16, Xi equated country, people and party, saying: “This country is its people. The Communist Party of China (CPC) has led the people to establish the People’s Republic”.

The underlying message was important. Xi had already become the party. The CPC is a “one leader party” now. With all his colleagues in the government in the last 10 years, including the not-so-friendly premier, Li Keqiang, hanging up their boots due to tenure restriction, Xi will be the sole leader of government too. His next target is the nation.

The CPC has seen seven general secretaries in the last seven decades. Deng Xiaoping enjoyed the status of supreme leader, but never became general secretary. Mao, the great helmsman, enjoyed an unassailable status in the party until his end in 1976. After taking control of the party in 1979, Deng tried to change this model and introduced the principle of collective leadership, which was upheld by leaders nurtured under Deng’s reformist zeitgeist like Hu Yaobang, Zhao Ziyang, Jiang Zemin and Hu Jintao.

However, Xi never hid his aversion for this principle. He viewed collective leadership as the source of inefficiency and corruption. The seven-member Politburo Standing Committee (PSC), that enjoyed absolute power in the government and party, was reduced in significance. Its meetings became irregular with Xi depending more on the monthly meetings of the 25-member Politburo.

Deng tried to reduce the party’s interference in the government by giving more teeth to the state council — the Chinese cabinet. But during his first term as the general secretary, Xi assiduously worked on bringing back Mao’s phrase of 1973 — “party leads everything”. As the party rewarded him in October 2017 by according the status of “core leader”, and amending the constitution to incorporate “Xi Jinping Thought on Socialism with Chinese Characteristics for the New Era” as the new party ideology, Xi returned the favour by declaring in the 19th Party Congress that the “party, government, military, civilian, and academic — east, west, south, north, and centre — the party leads everything”.

In 2018, the National People’s Congress — China’s parliament — amended the constitution to remove the term limit for the president. Xi’s grip over the party became clear when the 2,964-member People’s Congress gave overwhelming support to the amendment with just two votes against and three abstentions.

A tradition of eliciting and respecting the views of the party elders, modelled on the “eight immortals” of Chinese mythology, was introduced by Deng. He himself acted as an elder till his death in 1997. In the last decade, Xi gradually sidelined these elders. Although they remained in the 46-member presidium standing committee that occupied the dais at the 20th National Congress, their role became greatly diminished. Among the seniors, while Hu Jintao was present by Xi’s side, two others, Jiang Zemin and Zhu Rongji were conspicuous by their absence, leading to speculation that all was not well.

But Xi seemed in no mood for the advice of the elders. Beidaihe, the beach resort town of the northern Chinese province of Hebei, has been famous for annual retreats of the CPC leaders. These retreats remained extremely secretive with people getting to know about them only through the prolonged absence of the leaders from public gaze during the summer months of August and September. These retreats were used by Mao and Deng in the past to consult with other leaders about party leadership at various levels and other policy issues.

Under Xi, retreats at Beidaihe remained irregular and insignificant. He didn’t like too much interference in his choice of leaders or policies. Covid helped Xi cancel them in the last couple of years too. Indications from this year’s retreat suggest that Xi will have his way. Keqiang’s sojourn to Shenzhen after the retreat to pay tribute at Deng’s statue while Xi himself traveled to the north indicates strong disagreement between the two over economic policy. Xi, in his address to the Congress, made it clear that socialism and “common prosperity for all Chinese people” will remain his economic goals, much to the chagrin of Keqiang’s clique of economic liberals.

In the run-up to the Congress, the CPC mouthpiece, Global Times, ran videos highlighting the last 10 years of Xi’s rule. “Sounds of China — A Glorious Decade”, one video was captioned, while the other was called “No 1 — China, A Remarkable Decade”. A third video selected 10 “global thinkers”, many of them leaders of the communist parties of different countries, to eulogise Xi’s 10 years. Such tenure-centric promotions are common in democracies due to the competitive nature of elections. But in a one-party country like China, such leader-centric promotion clearly suggests that Xi now has complete sway over party and government.

Xi’s stature has surpassed that of all previous leaders, including Mao, today. With the CPC as a “one leader party” firmly behind him, Xi is now embarking on making China a “one leader country”. “No end in sight” — sighed the editorial in The Guardian, summing up the message of the 20th Congress. “1.4 billion people must live in it — and the rest of us must live with it”, it said.