The danger of authoritarianism revisiting India is a very real one. The authoritarian regime that was put in place with the imposition of the internal Emergency on June 26, 1975, is now commonly seen as an aberration in the political history of the country. The specific developments of the period, the rising popular movements that challenged the power of the Indira Gandhi government and the Allahabad High Court judgment disqualifying her election to the Lok Sabha, were a unique set of circumstances that lent credence to this view. But this is a superficial and incomplete understanding of the reasons why there was such a calculated onslaught on the democratic system.

The Emergency saw the arrest of opposition leaders and activists under preventive detention, suppression of civil liberties, press censorship and a blanket ban on all political activities critical of the government. The proximate cause for this crackdown was the growing popular protest movements: the Navnirman movement in Gujarat, the Bihar movement and the JP movement. This period also saw the biggest working class struggle in the form of the railway strike of May 1974, involving 17 lakh workers. All this turmoil was taking place in the background of rising economic difficulties and price rise. The Indira Gandhi government and the ruling party sought to tackle the mass protests and opposition with repression. The railway strike was sought to be suppressed by the arrest of around 20,000 workers and eviction from their homes in railway colonies. In West Bengal, the Central government and the ruling party unleashed terror against the CPM and other Left forces by the use of street thugs and the police. All this set the stage for Indira Gandhi’s pre-emptive strike to regain the initiative.

The Emergency was the culmination of an authoritarian drive that manifested earlier. Such a denouement to the political crisis had deeper reasons. It was an outcome of the structural crisis of the political economy, the growing political instability ushered in by the decline of one-party dominance and the crisis of legitimacy for an elected government. All these contributed to the assault on democracy itself and an attempt to refashion the political system. The Emergency sought to resolve the deepening crisis by a change to a more authoritarian constitutional order. The notorious 42nd constitutional amendment carried the seeds of this constitutional makeover.

That it failed was due to the people’s consciousness and their refusal to go along with this change from the top. The people resisted because of their lived experience — compulsory sterilisations, demolitions of the houses of the poor and other arbitrary bureaucratic actions.

For authoritarianism to succeed within a nominally democratic set-up, it requires either a strong military intervention and back-up or a political system that has a powerful executive presidency which can then adopt a Bonapartist path. Both these routes are not open in India. The army had no role either in the imposition of the Emergency or in sustaining it. As for the latter course, given our deep-rooted parliamentary democratic system and vast diversities, social, political and cultural, despite some moves for a presidential system, nothing much came of them.

Can a 1975 Emergency-like situation recur again, is a question that is wrongly posed. What needs to be considered is whether authoritarianism can once again emerge to threaten the democratic system. All the basic causes for the Emergency four decades ago — a crisis of the political system, problems of stability and economic discontent — are present today and can enable the rise of authoritarianism once more. The consequences of neoliberalism, the rise of Hindutva communal forces, the degeneration of political parties and the corrosion of the institutions of the state have combined to presage a creeping authoritarianism.

Neoliberalism has handed over large segments of not only production but basic services, such as education and health, to market forces and big business. This has led to unprecedented levels of inequality and corruption, which corrode the basic rights of citizens and democracy itself. This is reflected in the constant demand that, while governments may change, neoliberal “reforms” should proceed unchanged. The democratic process or the people’s mandate should not interfere with this.

The ruling party today is umbilically tied to the RSS and Hindutva forces. This has created a situation where a government and the ruling party, which have the legitimacy of a democratic election, are not above introducing the agenda and personnel of the RSS into the institutions of the state. This provides the opportunity for an organisation whose goals are inimical to that of the secular-democratic order proclaimed by the Constitution to work from within to undermine it. Moreover, through both state sponsorship and extra-governmental measures, Hindutva outfits are imposing their values on religious minorities, often by force, and the state will not intervene to protect their rights.
This mix of neoliberal market fundamentalism and Hindutva is a dangerous recipe for authoritarianism. On the one hand, the government moves to weaken the trade unions by changes in the labour laws, on the other, it seeks to bring market-friendly laws by relying on ordinances and bypassing Parliament, as illustrated by the land acquisition act changes.

The bureaucracy and the judiciary have also suffered erosion in their integrity and independence, which makes them supine in the face of authoritarianism. The existence of draconian provisions in laws such as the Unlawful Activities (Prevention) Act, Afspa and the sedition clauses in the IPC, as well as the willingness to use them to the detriment of citizens’ rights, are growing.

The middle classes periodically yearn for a strong leader to set things right. Incidentally, there exists such a “56-inch-chest leader” as the prime minister, who believes in centralising all power in his hands. Add to this the quest for a powerful national security state that can take on all enemies, real and imagined, then there is little doubt that the danger of authoritarianism revisiting India is a very real one.

The writer, a former general secretary of the CPM, was president of the Students’ Federation of India during the Emergency and was underground during that period

Why we must listen to Rohini Salian 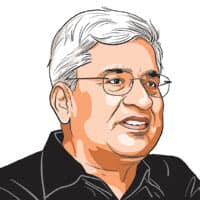 Prakash Karat<em>Prakash Karat is former general secretary of the CPM and was presi... read more