BSP chief Mayawati had visited Saharanpur and met those affected by caste-based violence that took place earlier this month.

Mayawati did not take the Bhim Army’s name during her visit to Saharanpur last week, but she did so in Lucknow on May 25. Dismissing the intelligence report that linked her brother Anand Kumar with the Bhim Sena, she instead accused the BJP of trying to politically neutralize her. She argued that leaders of the Bhim Army engaged in violence but were still not being arrested by the police, thereby indicating the ruling party’s tacit support for the group.

It is unfortunate that instead of lending moral support to this promising outfit of Dalit youths brave enough to take on casteist mobs emboldened by the fact that a Thakur has become Uttar Pradesh’s chief minister, Mayawati is condemning it as a tool in the hands of the enemy. She, who has been the recipient of a huge mobilization of Dalits to celebrate her birthdays could have easily organised a massive demonstration in Lucknow against the atrocities in Saharanpur.

But it is clear that she won’t do it. Despite her ignominious electoral defeats she hasn’t realized that she has never really connected with any real problems that Dalits have faced, and indeed, has fooled them with empty emotional issues.

Dalits have been taken in by the ‘Dalit ki Beti’ rhetoric for two decades. They had believed that the BSP’s power was Dalit power. Now that they are being shaken by the harsh reality of the ascendance of vocal Brahmanical forces, they have begun to rearticulate their politics. The Bhim Army is a manifestation of this process. It is a direct by-product of the BSP’s own misdoings.

The BSP has been beating the mainstream parties in their own game, thanks to the strategic genius of Kanshi Ram; that’s a historical feat that cannot be denied. But having reached there, it should have tried to distinguish itself as the party of and for the downtrodden. It was one thing to play the game of caste arithmetic to win political power but quite another to cling to it.

Political power, as Kanshi Ram said, was the master key that opened the door to every problem. But Mayawati squandered the political and emotional support she received from Dalits and proceeded to do what caste-led political parties did far more blatantly.

For instance, she had the opportunity to take up radical land distribution to landless families (beyond tokenism that she claimed to have done), basic improvement in educational and health facilities to the Dalits (what the Bhim Army has taken up as its main mission), and of course, to curb the caste atrocities faced by the Dalits.

If she had done this much, she would have distinguished herself and the BSP in the minds of people as the party for and by the downtrodden. One may argue that do-gooders have no guarantees that people will vote for them. Even so, the BSP could have exposed the shortcomings of the political system and shown how the political dice was loaded against the lower castes.

But Mayawati did not even pay attention to her core constituency of Jatav-Chamars. Caste atrocities continued to take place in Uttar Pradesh. Perhaps her first two stints as chief minister, from June-October 1995 and from March-September 1997, were altogether too brief. But her two later terms, from May 2002 -August 2003 and from May 2007-March 2012 – in the last one, she had absolute majority in the assembly – gave her incredible opportunities.

According to NCRB data, the total atrocities in the state in 2002 and 2003 were 7927 and 2821, respectively, rising to 3785, 4397 and 4960 in the next three years when she was out of power, indicating the backlash and political vulnerability of Dalits created by the politics of a pro-Dalit party.

When she lost power, the figures rose substantially, to 7078, 8075 and 8358 for the next three years, signifying the worsening plight of her core constituency. This increase is directly related to her political acrobatics stemming out of her ‘sarvajan’ strategy. After all, her dazzling success in the 2007 was due to it, represented by her colourful slogan: Haathi nahin, Ganesh hain, Brahma, Vishnu Mahesh hain

Dalits who were reared on the staple of anti-Brahmanic rhetoric of the BSP, were disturbed by this somersault; but the prospect of power encouraged them to overlook their fears and bring the BSP to power. But when the BSP, in attempting a balancing act with the other castes it had wooed to get power, began ignoring the Dalits, they started waking up to the harsh reality.

Now with a Hindutva zealot in the chair in Uttar Pradesh, it is only natural that Dalits will react with fury. The Bhim Army is only a manifestation of this anger and should be considered as a natural continuation of the BSP’s politics.

The emergence of the Bhim Army may be likened to the Dalit Panthers in Maharashtra in 1972, which in turn was the by-product of the bankrupt politics of the erstwhile Republican Party of India (RPI).

There are some differences, however. Unlike the Dalit Panthers, the Bhim Army did not just make militant noises. Rather, Chandrasekhar Azad and Vinay Ratna Singh, its leaders, reportedly formed the Bheem Army Ekta Mission in 2015 with a constructive mission of educating Dalit children free of cost. The Bheem Army now runs over 300 schools in and around Saharanpur.

The leaders of the Bhim Army have certainly spoken about their disillusionment with Mayawati’s style of politics, but at the same time have publicly sworn by Kanshi Ram. Chandrasekhar Azad’s adoption of Ravan as its mascot reflects a cultural counter to the BJP’s upper caste god, Ram.

The Bhim Army appears rooted in the stereotype of BSP-type identity politics. But the very fact it has taken on casteist goons in Saharanpur reflects its full potential to transcend the BSP and present a new politics of emancipation of the Dalits.

Ravan and his comrades had better measure up to this challenge. 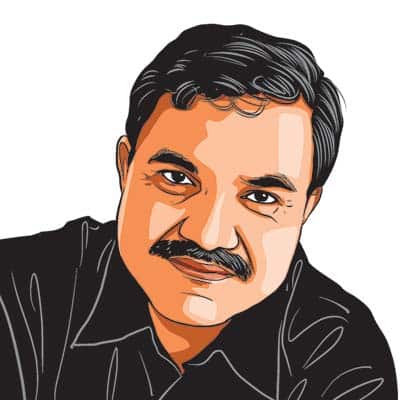 Anand TeltumbdeTeltumbde is a writer and civil rights activist with the Committee for... read more