Japanese marathon’s late talisman, Tsuburaya, was a hero of the 1964 Games who lived to run and died clutching his medal. Fifty three years since his death, the nation's iconic running culture owes much to the tragic hero The large Olympic rings are displayed in the Odaiba section of Tokyo ahead of the 2020 Olympics. (AP)

Last March, before the Olympics was postponed, the Japanese marathon team stood at a grave in a cemetery in Fukushima and swore to get medals in the tournament. They then visited a memorial hall of (Ko-key-chi Suba-raa-yah) Kokichi Tsuburaya, the man interred in that grave, the marathon runner who won the bronze in the 1964 Olympics, and who not long after committed suicide, clutching his bronze medal. The 61-year old marathon project leader Toshihiko Seko, an Olympian, was moved enough to say, “Tsuburaya’s run formed the bedrock upon which the marathon stands today”.

Not many in the country had considered a track-and-field athlete as a potential medallist until his achievement, and this is the story of his and a nation’s pining. Japan is the most running obsessed nation on the planet with a particular emphasis on long-distance races that are insanely popular. This year, over half of Japan’s population, almost 65 million people, watched the men’s two-day road relay between universities in the Kanto region of Japan – the famous Hakone Ekiden, run over 165 miles. 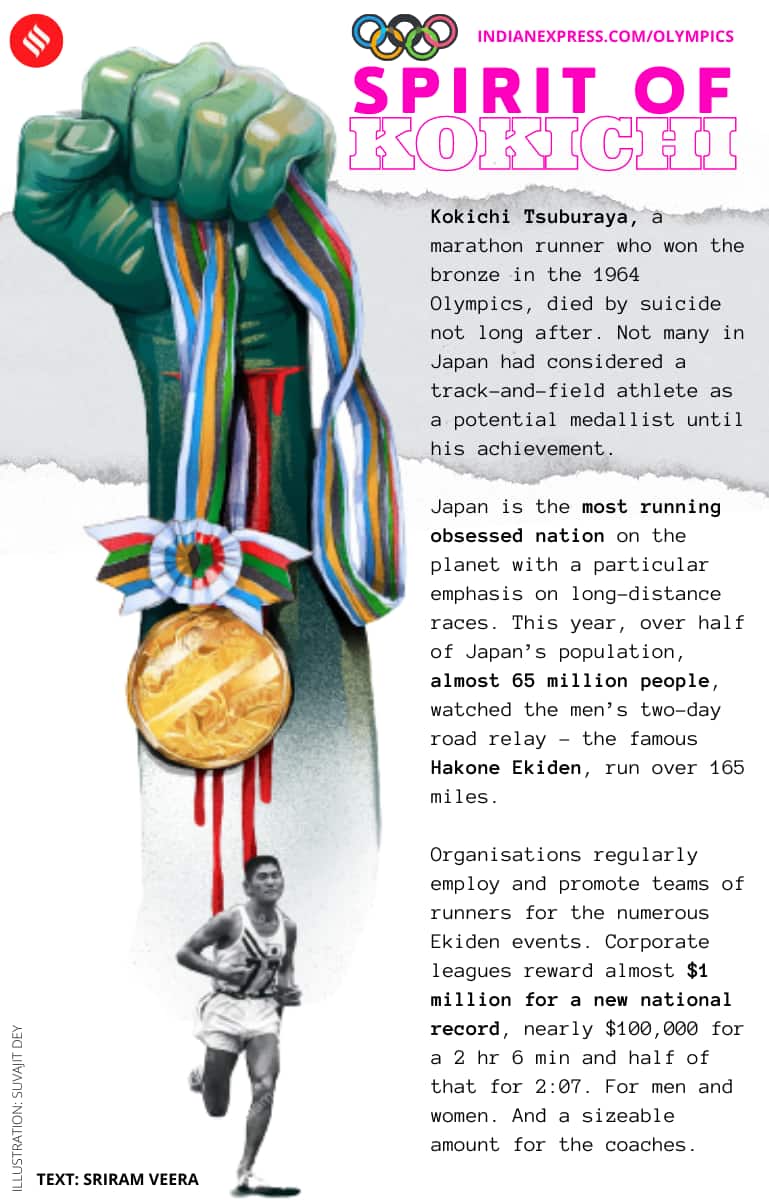 Over the last 30 years, since the time it has been telecast, the relay race has regularly hooked 30% of the population. During Japan’s Edo period from 1603 to 1868, where the country shut itself off from contact from the rest of the world, couriers ran messages from Tokyo and Kyoto, passing to another courier for a leg of the journey. The races of ekiden, which is made up of the Japanese characters for ‘station’ and ‘transmit, are a tribute to that past. Many ekiden teams were formed in the debris of the second world war as part of the nation’s rebuilding process to bring people together and to boost community spirit. The famous races of Lake Biwa and Fukuoka, and top ekiden tournaments began in this phase. Entire towns come out to watch these races. Running has a unique composite culture of corporate and spiritual in Japan. Organisations regularly employ and promote teams of runners for the numerous Ekiden events. Corporate leagues reward almost $1 million USD for a new national record, nearly $100,000 for a 2 hr 6 min and half of that for 2:07. For men and women. And a sizeable amount for the coaches.

Then there are the revered running monks of Mount Hiei, who attempt to achieve enlightenment by completing a thousand marathons, with prayer breaks at shrines, in a thousand days, spread normally over seven years. In his book on the running culture in Japan, ‘The way of running’, Adharanand Finn quotes a running monk: “The idea behind the constant movement of the thousand-day challenge is to exhaust the mind, the ego, the body, everything until nothing is left. And when you are nothing, then something, pop, comes up to fill the space.” And this something, the monk says, is the sense of oneness with the universe.

There is even a Buddhist deity for running: Idaten. In the folklore, Idaten chased down demons to recover sacred relics. Finn writes of a meeting with a temple priest who talks about Idetan and claps his hands. ‘In that time,’ he says, clapping his hands again to be clear, ‘he can go around the earth seven and a half times. Faster than Usain Bolt,’ he says.

Tsuburaya’s running ambitions turned serious in high school when he created a new section record in an ekiden. Even as a child Tsuburaya loved to run but when he was five he suffered severe pains and the parents not only found that his left leg was shorter than the right but that he was afflicted with tuberculosis arthritis that caused pain to the hips, knees and ankles. It would cause pain whenever he ran but Tsuburaya was love-struck with running and refused to relent. An exasperated father eventually gave permission after extracting a promise: “Once you decide this, don’t quit halfway through”. He joined the army – ‘Ground self-defence forces’ – and grew in stature through competitive races.

There are a few who question the intricacies of the running culture in Japan. In his book, Finn summarises the views of Ethiopian runners, who occasionally train in Japan. “Running on hard surfaces, running too many miles and not enough speedwork – these are recurring themes, at least when I talk to the East African runners.” A running coach Kenji blames it on the ekiden races. “ekiden is destroying our athletes,” he tells Finn. “He goes on to repeat his story about how he was once the second-fastest junior runner in the world but was forced to over-train. He says coaches don’t think about the long-term prospects of the athlete, particularly at the high-school and university levels. The pressure to win the ekidens is too great, he says, so they push the athletes too hard. He is particularly critical of Hakone. He says the preparation for Hakone requires regular 30km runs from student runners. ‘It’s too long, too hard,’ he says.

Regardless, as years went by, the relay races of ekiden grew more popular than the individual marathons, seen as a perfect symbolism for the Japanese concept of group harmony called ‘Wa’. But some critics have questioned it, wondering if the Japanese are conformists, then how come all their sports – judo, karate, sumo, and so on- are so individual.

The Japanese-American writer Roland Kelts provides a plausible answer. “‘While there is a tendency in Japan to prioritise the harmony of the group over the desires of the individual, that doesn’t mean that individuality and individual performance and responsibility are devalued. In fact, the concept of amae, or the need to[…]” “in good stead with others, places a very high value on individual behaviour and performance. You have to be a better person as an individual if others are relying upon you.’ Thus, ekiden is an ideal sport for the Japanese, for “while each individual has to perform at a high level, the goal is success for the group.”

Sometime before the 1964 Olympics, Tsuburaya fell in love with Eiko and wanted to marry her after the tournament. Japan collected medals in judo, wrestling, boxing, weightlifting, swimming, gymnastics and the caravan rolled to the last day. A misty haze swept down on the stadium on a gruellingly humid day in Tokyo as he lined up with the favourite, the Ethiopian Abebe Bikila who had won the marathon on barefoot in the 1960 edition in Rome. Bikila had been hospitalised for a week 40 days before the Tokyo event after emergency surgery for acute appendicitis but won the gold, wearing white flat-soled running shoes. A giddy wave went through the 70-000 strong stadium at the sighting of their Tsuburaya, emerging from the tunnel. On his heels was an Englishman Heatley who had over the last two hours slowly closed the gap and on the final curve on the cinder track, Heatley willed past Tsuburaya and collective anguish descended on the stadium. No one was more crestfallen than Tsuburaya, who lost the silver by four seconds and staggered into the arms of the officials. He would then walk in a daze before sinking, head first onto the ground.

He was a national hero but didn’t feel like one. He wanted to do better at the next Olympics in Mexico and began training hard. He wished to marry Eiko and though his parents and running coach were supportive, the military superiors weren’t as they felt it could hamper his training. The protesting coach was demoted. In his book, 1964 – The Greatest Year in the History of Japan, Roy Tomizawa writes that though Eiko wished to wait, her mother terminated the relationship. Heartbroken, and without a coach, Tsuburaya tried to persevere with his training but his body began to betray him. A slip disc and an injury to the Achilles tendon that required surgery in ’67 followed and he returned to his hometown of Sukagawa in Fukushima for a new year’s break where he learned that Eiko had married.

Tsuburaya returned to his army base and on January 8th 1968, slit his wrists and died, clutching his bronze medal. An extraordinary death note was discovered. Where he politely and lovingly thanked his family for the Tororo soup, dried persimmons, rice cakes, sushi and wine, herbal rice, nanban zuke pickles and mongo cuttlefish he had eaten in the holiday, and ended with these lines: My dear Father and my dear Mother, your Kokichi is too tired to run anymore. Please forgive him. He is sorry to have worried you all the time. My dear Father and Mother, Kokichi would have liked to have lived by your side. 53 years after his death, he lives on as the inspiration behind Japan’s marathoners to realise his dream of winning gold.