PV Sindhu’s attack: A cerebral carnage which was more than just the smash

The Sindhu attack at Tokyo - a cerebral carnage - came through in three rallies, where save for the kill stroke in the end, the menace stayed hidden, lying in wait for the ambush. 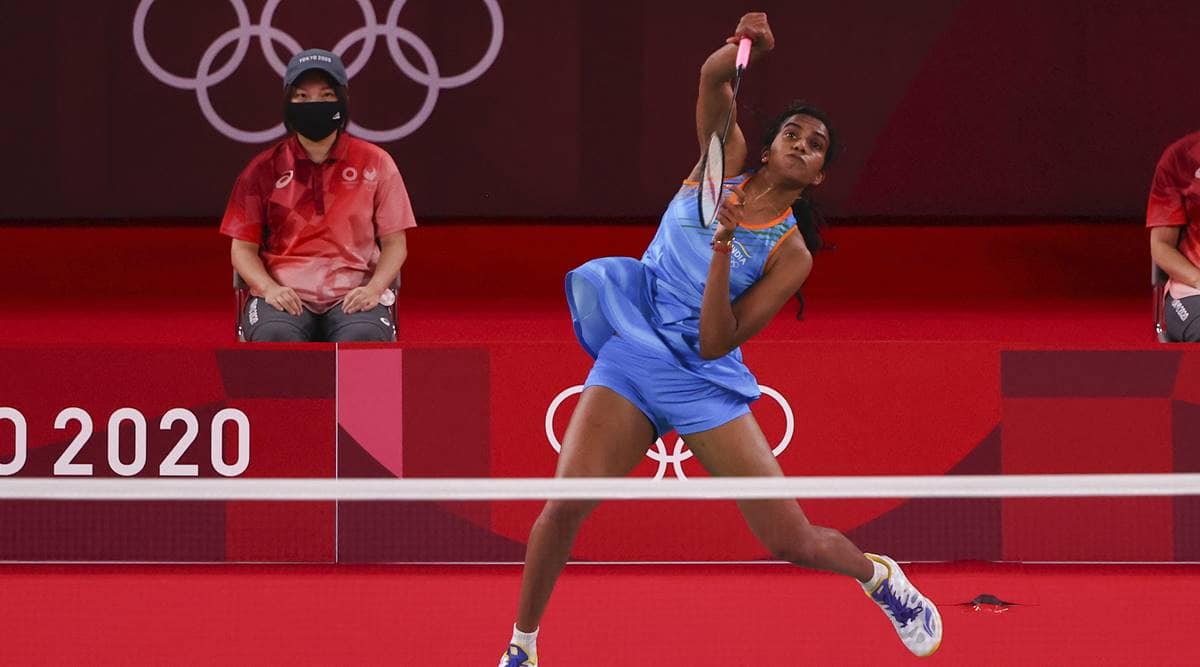 PV Sindhu of India in action during the match against He Bingjiao of China. (Reuters Photo)

Everyone sees the mammoth ship coming over the horizon. No one notices the busy propellers. Propellers made of bronze. PV Sindhu’s famed attack headlined by the smash, is like that gleaming ship. But the bronze medal match against He Bingjiao on Sunday was an embodiment of Sindhu’s attacking play, that goes beyond just the big booming smash-kill.

Sindhu became the World Champion on the back of an unrelenting offence that decimated the likes of Chen Yufei and Nozomi Okuhara in straight sets. She’s rarely played that domineeringly prior to that or later.
But Sunday’s sophomore Olympics bronze, was carved out of a more sophisticated attack than pure beast power of the shoulder.

Sindhu constructed her kills, arranged her attack, lego-built her lashing of the eventually hapless He Bingjiao.

The Sindhu attack at Tokyo – a cerebral carnage – came through in three rallies, where save for the kill stroke in the end, the menace stayed hidden, lying in wait for the ambush. She brought peril He BJ’s way with a lot of retrieving patience.

The makings of the attack:

He BJ is a left-hander with a highly dependable backhand. But the inherent trouble with backhands always is that they are one mistake away from letting you down mercilessly. Leading at 9-8, Sindhu would get into a long rally, with an aim to break He BJ down on her backhand. In the last 20 stroke exchange, with 10 from Sindhu, 5 were aimed at the Chinese shuttler’s backhand, forcing her to go across the body. Interspersed across the rally pinning the opponent to deep backhand, this was Sindhu’s sequence – a reflexive forehand thwack, a net lift, a loopy drop, another lift at the net, and finally the ending smash.

ALSO READ |There weren’t many expectations from me in Rio, getting a medal in Tokyo a wonderful moment: PV Sindhu

He BJ would employ her entire range of the backhand to deal with this line of attack – she went across the body her arm parallel to the ground, she then sent back a toss from around the head. The third was a sensational 360 pivot when she whacked the shuttle on a stylish backhand and took an entire turn in two seconds to come back into position to play the next 4 strokes. On the fourth shuttle on that deep right corner, she sent back a no-frills backhand. Sindhu had in the meantime dragged her to tackle two lollipops on the forehand front and back corner. He BJ was accustomed to the rhythm of one to her backhand, and two to the fore. It’s here when Sindhu would cleave the rhythm and send two to her backhand, the second smash a tad flat. He BJ would go across full stretch, but was a second late to connect.

It wasn’t a monster smash, just the peppering of her backhand that drew out the mistake.

While cross courts were Sindhu’s go-to and yielded many points on the day, the venom came from the straighter one. It wasn’t a scornful, snappy shutting off of her opponent though. At 10-8 in the opener, Sindhu would pick shuttles diligently, go chasing them to all corners, negotiate the lengths, lunge, bend, reach out wide, scramble, but never get out of position. He BJ gave her time on the strokes, she wasn’t particularly fast or deceptive today. But Sindhu’s anticipation even when she was retrieving an immense number of strokes indicated she wasn’t being mentally stretched. She was on the shuttle, and not panting away. It was after allowing He BJ to fall into the lull believing she dictated that Sindhu switched avatars, and sent one zinger straight – the only perceptibly attacking stroke. Just one needed. As if to drill home, the next winner came the same way.

Reigning world champion P V Sindhu became only the second Indian and the country’s first woman to win two Olympic medals, securing a bronze after a straight-game win over world no.9 He Bing Jiao of China in the badminton women’s singles third-place play-off (Reuters Photo)

The point of no return

At 15-13 He BJ trailed in the second still harbouring hopes of reversing the momentum. She had built herself some pattern of reducing the gap on Sindhu’s 11-8 lead. But Sindhu went back to work on grabbing the next point, fighting for it as if it was the first one she played.

In the ensuing rally, Sindhu would forget about the steep smash, and the outstanding cross drop and a mammoth round the head smash she had played moments ago. Putting her head down, she would go chasing the shuttle, undaunted by the striding work, and just when He BJ built herself a dream of comeback, Sindhu would pause to send back a ginormous crosscourt smash the Chinese way. At 16-13, He BJ knew it was a matter of time. 15-14 could’ve given her a toe-hold. Sindhu banged the door in the opponent’s face. “Today opened my eyes about how strong Sindhu is,” He Bingjiao would say of their 16th face off.