Friends, family, fans, federation officials throng to get a glimpse of Olympic heroes

Terminal 3 of the Indira Gandhi International Airport had never been busier. With wrestling silver medallist Ravi Dahiya, boxing bronze medallist Lovlina Borgohain and the women’s hockey team and many other athletes landing around the same time as Neeraj, there was a carnival-like atmosphere. 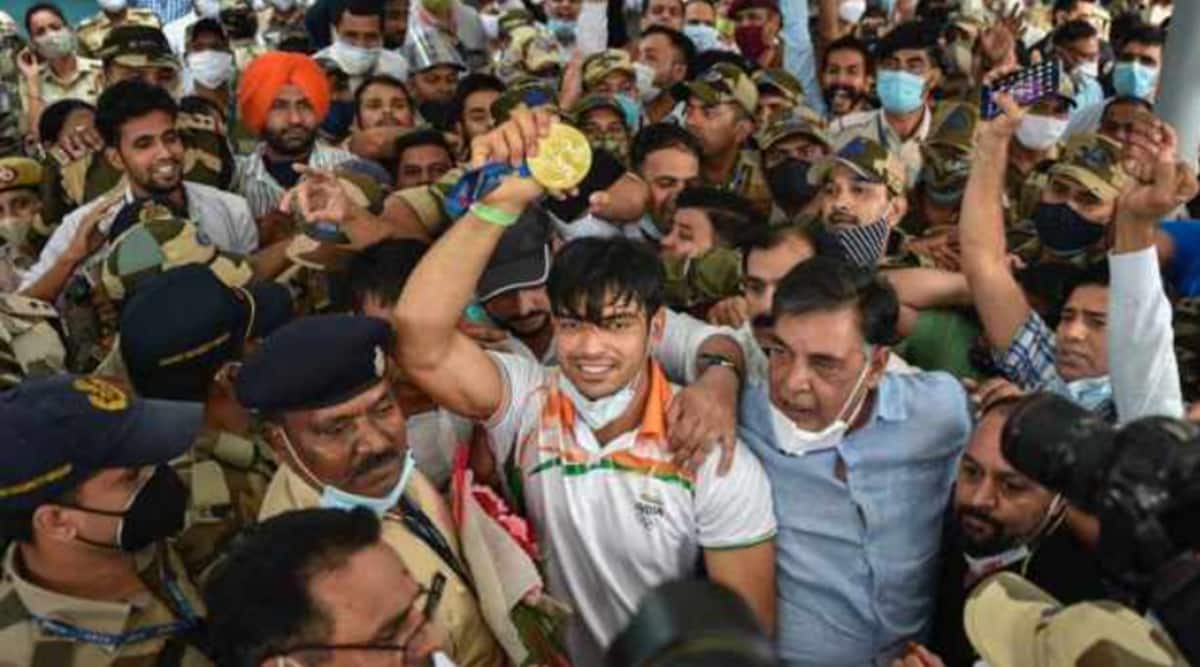 Olympic gold medalist Neeraj Chopra being welcomed on his arrival at IGI Airport, after the end of the Tokyo Summer Olympics 2020, in New Delhi, Monday, Aug. 9, 2021. Chopra won India its maiden Olympic Gold in athletics in Tokyo 2020. (PTI Photo)

About 400 junior athletes from Delhi NCR, 50 officials of the Athletics Federation of India, 40 jawans of the Rajputana Rifles and scores of fans went home disappointed from Delhi airport after failing to catch a glimpse of the newly-crowned Olympic javelin champion Neeraj Chopra.

Terminal 3 of the Indira Gandhi International Airport had never been busier. With wrestling silver medallist Ravi Dahiya, boxing bronze medallist Lovlina Borgohain and the women’s hockey team and many other athletes landing around the same time as Neeraj, there was a carnival-like atmosphere. Friends and relatives of the athletes, accompanied by orchestra parties, were seen scampering around the terminal, trying to figure out which gate their champion would emerge from.

A miscalculation by one of the AFI officials meant the 400-odd children, who had come from various parts of the city, couldn’t get to see their “Neeraj Bhaiyya”. But those who got their planning right managed a fleeting glimpse of Neeraj, who was rushed out of the airport by security officials as camerapersons first on foot, and then in their vans, went in hot pursuit.

“It’s alright. He will come to our centre tomorrow. We will meet him and congratulate him personally there,” said an Army colleague of Neeraj who had a bouquet in his hand that he could not present to the athlete.

The frenzy even caught the eye of a couple of pilots who decided to hang around at the terminal even after their duty hours. A few security officials sneaked in a few selfies before Neeraj appeared at the VIP gate which was cut off from the general public. Cameras on monopods in full extension had swarmed the gate hours before Neeraj stepped out.

There were several false alarms as well. “I think that’s Neeraj,” a photographer mistook some support staff in the India jersey. And when Neeraj finally arrived, the 20-plus security officials quickly whisked him out.

Dahiya’s father Rakesh had arrived with an army of enthusiastic villagers. And when former Asian Games gold medallist Satpal – who coaches Ravi at the Chhatrasal Stadium – arrived, the excitement hit the roof. Chants of “Mahabali Satpalji ki jai” echoed around the terminal. Rakesh decided to step aside to take a breather. Later, Ravi hopped onto an open-roof SUV with Satpal as they made their way out amid rapturous cheers.

Later in the evening, these athletes were felicitated by sports minister Anurag Thakur, with ministerial colleague Kiren Rijiju sharing the stage. “Thank you all for the support. This gold medal is not just for me but for the entire nation. I have been roaming around with this in my pocket since then. I haven’t been able to eat or sleep properly since then but everything feels fine when I look at it,” Neeraj, Indian athletics’ first and only Olympic medallist, said.

“Competition was really tough, but you should never get scared by looking at your opponents. Just give your 100 per cent and don’t be scared of anybody,” the 23-year-old from Khandra village in Haryana said with his proud parents seated in the audience.

It has been sleepless nights for not only Neeraj but his family as well. Uncle Bhim, the unofficial media manager of the Chopra family, has been entertaining well-wishers, local politicians and journalists ever since the victory. “Abhi to phursat hi nahin hai” (I don’t have any free time now), says Bhim with the brightest smile in the felicitation hall.