Tripura minister denies she was groped by colleague at PM rally, Oppn wants him sacked

A video clip went viral on social media where minister Manoj Kanti Deb was seen touching Minister for Social Education and Social Welfare Santana Chakma on the waist and she brushing away his hand. 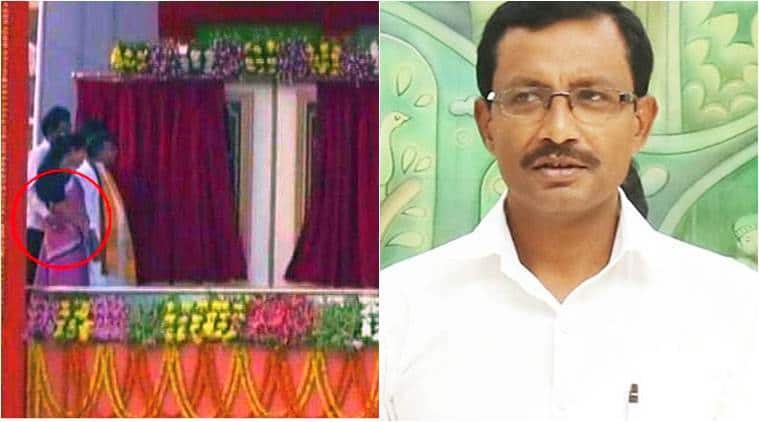 A video purportedly showing BJP leader and Tripura Minister for Sports and Youth Affairs Manoj Kanti Deb groping a woman member of the cabinet during a rally of Prime Minister Narendra Modi last week has triggered a row with the Opposition Congress and CPI(M) demanding Deb’s resignation and arrest. The BJP has dismissed the allegations as “character assassination”.

Prime Minister Modi Saturday visited Tripura to inaugurate a statue of Maharaja Bir Bikram Kishore Manikya Bahadur, the last reigning king of Tripura, at MBB Airport. Later in the day, he addressed a rally at Swami Vivekananda Maidan where he inaugurated two projects via remote control. Soon a video clip went viral on social media where minister Manoj Kanti Deb was seen touching Minister for Social Education and Social Welfare Santana Chakma on the waist and she brushing away his hand.

(The Indian Express could not independently authenticate the video)

Tripura Congress vice-president Tapas Dey has demanded an inquiry into the incident. “Such incidents should not happen in public life. It is highly undesired. It should be properly investigated,” he said.

Speaking to the indianexpress.com, BJP spokesperson Dr Ashok Sinha said the controversy was raked by “opportunist opposition” leaders who had no other issue in hand. He criticised the CPI(M) and Congress for engaging in “character assassination”.

However, both the ministers involved have dismissed the allegations and said minister Manoj Kanti Deb was simply trying to get ahead of minister Santana Chakma to have a better view of the Prime Minister inaugurating the projects. “There is no ill motive involved. There are certain people in opposition who are trying to politicise it by blowing it out of proportion,” Santana Chakma, the woman minister, on Tuesday told indianexpress.com.

Deb said the allegations against him were not true. “I was trying to go in front of the minister, Santana Chakma, to have a better view of the Prime Minister’s inauguration event. Since she was standing in front of me, I tried to move her aside. That’s all,” Deb said. He added that the allegations were testimony to the low taste of the Opposition parties in the state.