Abhijit Sinha, Nagaland’s Principal Secretary (home), said that the situation is under control now and prohibitory orders have been imposed in Mon town. 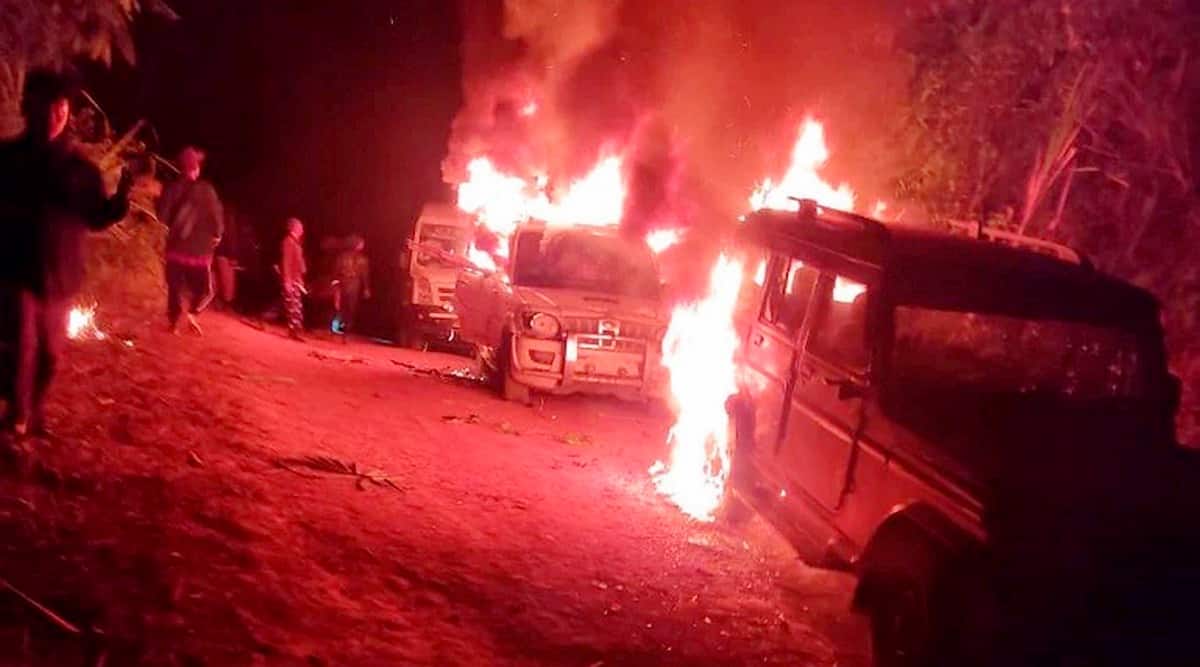 “They engaged in vandalism, destruction and set fire to some buildings. The security forces opened fire, which led to the death of one civilian. One more was injured,” Abhijit Sinha, Nagaland’s Principal Secretary (home) told The Indian Express. He added that the situation is under control now and prohibitory orders have been imposed in Mon town.

Six civilians were killed in the operation in Tiru area of Mon district on Saturday evening when security forces allegedly mistook them for militants and fired on them. This led to clashes later, in which seven civilians and one security personnel were killed.

The government has said that a Court of Inquiry has been set up to investigate the incident. “Officially, ten people have been declared dead…there may be more,” Y Patton, Deputy Chief Minister and Home Minister of Nagaland, told The Indian Express. “They are saying it is a case of mistaken identity, but I cannot confirm until I reach the spot and find out,” he added. Patton is on his way to Oting. Unofficial sources said at least 13 are dead.

In a statement Sunday morning, the Assam Rifles said that “based on credible intelligence of likely movement of insurgents, a specific operation was planned to be conducted in the area of Tiru, Mon District, Nagaland”. Without divulging details on the number of casualties or the units involved, the statement said “the incident and its aftermath is deeply regretted”.

“The cause of the unfortunate loss of lives is being investigated by a Court of Inquiry at the highest level and appropriate action will be taken as per the course of law,” it said, adding that the “security forces have suffered severe injuries in the operation including one soldier who succumbed to his injuries”.

In a tweet Sunday, Union Home Minister Amit Shah promised justice to the families of those killed. “Anguished over an unfortunate incident in Nagaland’s Oting, Mon. I express my deepest condolences to the families of those who have lost their lives. A high-level SIT constituted by the State govt will thoroughly probe this incident to ensure justice to the bereaved families,” Shah tweeted. Assam Rifles comes under the ambit of the Union Home Ministry.

As per local reports, security forces mistook the victims to be members of the Yung Aung faction of proscribed outfit NSCN(K). “It seems like a botched-up ambush,” said a Nagaland government official, on condition of anonymity.

According to sources in Oting, a few local boys were returning to their village after working in a mine on Saturday evening when their vehicle was allegedly fired upon by security personnel. “They died on the spot,” news agency PTI said, adding that the security forces were conducting an operation in the area after receiving inputs on the movement of militants of Yung Aung faction.

Sources in the security forces asserted that it was a case of mistaken identity. An official said that based on certain inputs, the forces were waiting for people in a specific Bolero car around 5.30 pm on Saturday. It was already dark when they spotted a similar Bolero and launched an operation, the official said.

Six people were shot dead in the car, while two were injured. It is then, sources mentioned, that the security forces realised the error. They then took the two injured locals for medical treatment.

“The unfortunate incident leading to killing of civilians at Oting, Mon is highly condemnable. Condolences to the bereaved families & speedy recovery of those injured. High level SIT will investigate & justice delivered as per the law of the land. Appeal for peace from all sections,” tweeted Chief Minister Neiphiu Rio.

Political parties too condemned the incident. Chief minister Rio’s National Democratic Progressive Party (NDPP), the main alliance member in the current government, said “such random and dastardly acts” were “unimaginable at a time when the Indo-Naga issue was nearing conclusion.” The statement requested the central government to repeal the Armed Forces (Special Powers) Act, calling it “unnecessary and redundant” in the state’s present context.

Nagaland BJP chief Temjen Imna Along said Saturday’s incident was “tantamount to war crimes during peace time” and “amounted to genocide”, especially since the Centre was in talks with Naga groups to settle political issues. “There can never be any justification for such kind of massacres targeting innocent civilians. The innocent victims were labourers returning from a hard day’s work and were not armed… It is therefore tantamount to war crimes during peacetime and amounts to summary execution as well as genocide,” the statement said.

The NSCN-IM, the largest Naga rebel group, said the “absurdity and insanity” of the Indian security forces had been “exposed” and that it was a “black day” for the Nagas. “Ironically, the fact that the ubiquitous Indian security forces has brought about toxic storm of bloody dust in Nagalim is not a new thing but a repeat of the past to suppress the legitimate Naga political movement” NSCN-IM said in a statement.

“The Indian security forces will never be able to wash its hands off, smeared with the blood of innocent Nagas no matter how it come out with a nonsensical statement which is linked to credible intelligence reports of movement of insurgents” the statement added.

“The Nagas had in the past faced a trigger-happy Indian security forces, acting with impunity under the Government of India’s Armed Forces (Special Powers) Act/AFSPA which is mainly used against the Naga political movement. Notwithstanding the ongoing Indo- Naga political dialogue that has seen much fruition during the period running more than two decades, the violence against the Nagas continues unabated. This is one of the most unfortunate incidents  of the Indo-Naga ceasefire signed in 1997,” it further said.

West Bengal Chief Minister and Trinamool Congress supremo Mamata Banerjee too demanded a thorough investigation into incident. Taking to Twitter, she wrote: “Heartfelt condolences to the bereaved families. I pray for the speedy recovery of those who were injured. We must ensure a thorough probe into the incident and ensure that all victims get justice!”

Heartfelt condolences to the bereaved families. I pray for the speedy recovery of those who were injured.

We must ensure a thorough probe into the incident and ensure that all victims get justice!

Following the incident, mobile internet was suspended in Mon district on Saturday until further orders. Sources said the situation remains tense in the district.

The incident was also condemned by local civil society organisations. The Konyak Union Kohima said it would abstain from further participation at the ongoing Hornbill Festival, citing “atrocities perpetrated by the security forces” in Oting village.

The Eastern Nagaland People’s Organisation (ENPO) has said that six tribes of Eastern Nagaland will abstain from participating in the festival. “It has to be understood by all concerned that this order/move is not against the state government, but to show resentment against the security forces who have committed this heinous crime, and to show solidarity of the 6 tribes,” the organisation said in a statement.

The government said two minutes of silence and prayer will be observed at Kisama, all locations of the Naga Heritage Village and at all events of the Hornbill Festival in “remembrance and solidarity of the dead in Mon.”