In a first, the elusive clouded leopard sighted in Nagaland mountains

The wild cats have been sighted at arguably one of the highest reported altitudes in the world till date. 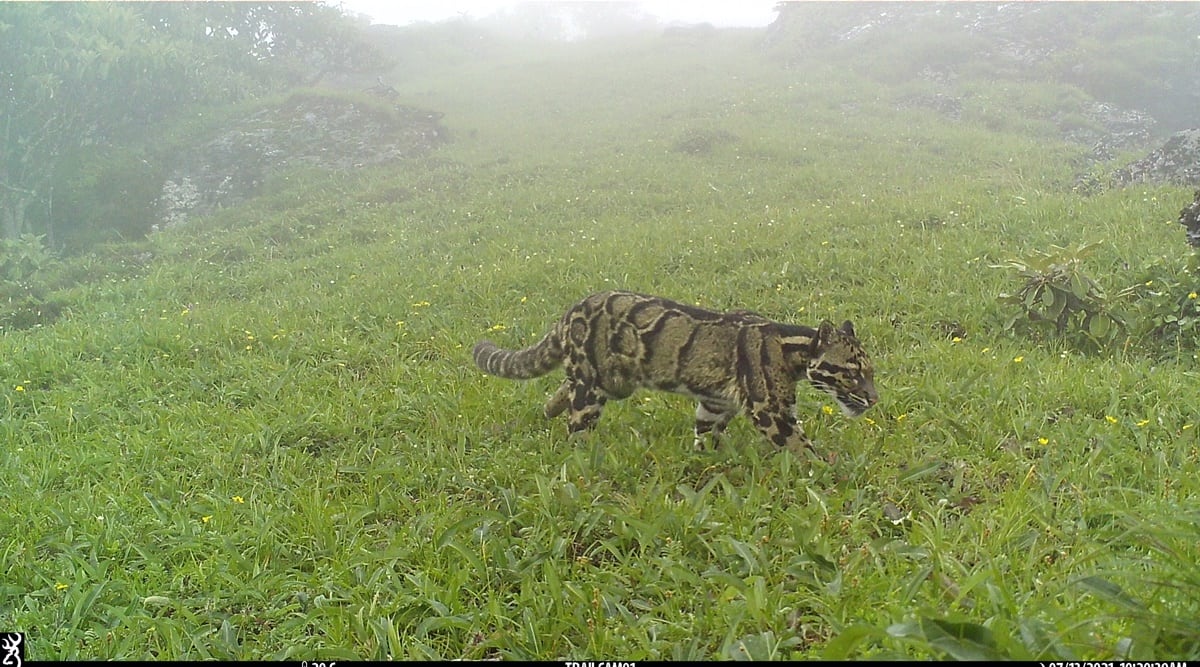 A team of researchers have recorded photographic evidence of clouded leopards at an elevation of 3,700 metres in a community-owned forest along the Indo-Myanmar border in Nagaland — arguably one of the highest reported altitudes where the animal has been sighted in the world till date.

The findings have been published in the Winter 2021 issue of the Cat News, the IUCN/Species Survival Commission (SSC) Cat Specialist Group’s biannual newsletter.

The tree-climbing clouded leopard (Neofelis nebulosa), a medium-sized felid (wild cat), is the smallest of the large wild cats and is categorised as ‘Vulnerable’ under the IUCN Red List of Threatened Species. Since they are largely known to inhabit low elevation evergreen rainforests, the sighting is significant, experts said.

The survey was part of a collaborative initiative between the WPSI and Thanamir village to document the area’s bio-cultural diversity.

The team, which includes five resident villagers from Thanamir, placed over 50 camera traps in the village community forest — first between January and June, 2020, and later between July and September, 2021.

“In total, we have evidence of at least two adults and two cubs. Two distinct individuals were photocaptured at a camera placed above the tree line at 3,700 m close to the summit of Mt. Saramati. Another individual was photo captured at 3,436 m,” stated a part of the peer-reviewed  publication, authored by Ramya Nair, Alemba Yimkhiung, Hankiumong Yimkhiung, Kiyanmong Yimkhiung, Yapmuli Yimkhiung, Toshi Wungtung, Avinash Basker and Sahil Nijhawan.

Nijhawan, a conservation anthropologist who works in Arunachal Pradesh, and is advisor to the WPSI initiative, said the capture was especially significant because the population included breeding individuals. “They are residents of the area, and are reproducing there, which indicates that there is enough food and forest cover for them to do so,” he said, adding that little is known about the “stunning and beautiful” clouded leopards, which are usually found in tropical rainforests, “full of trees”. “But we have found them at heights above where the trees end,” he said.

There are previous reports of high-elevation records of clouded leopards, but in state-protected areas, including Sikkim (3,720 m), Bhutan (3,600 m) and Nepal (3,140 m). According to Nijhawan, the fact that the Nagaland sighting is in a community forest, reflects that such areas, even if not protected by law, host a wealth of biodiversity.

“Traditionally, across India, forest and wildlife is protected by law enforcement. While this may work in the rest of the country, in the Northeast, much of the forests are owned by local communities,” he said, adding: “Villagers use these forests, yet they support amazing biodiversity, which are globally threatened.”

In the local Chirr dialect of the indigenous Yimkhiung tribe that resides in Thanamir, the clouded leopard is known as “Khephak”, which means a greyish big cat.

Speaking about the project, Nair, of the WPSI, said that the team has been generating data on wildlife population through camera trap images of mammals in the forest, as well as conducting bird surveys, in collaboration with the local student union and village council. “All this data will help them (local bodies) form their resolution and management plans in the community forests,” she said.

Wildlife Conservation Society ecologist Vidya Athreya, who has extensively worked on human-leopard interactions, said “little” was known about the clouded leopard, and such evidence was “fascinating”. Nair added the sighting would help increase knowledge of the  habitat of the species.

“All high elevation records are from summer months suggesting that clouded leopards may seasonally expand their range upwards as snow recedes and higher ridges attract prey” stated the paper.

It added that as the climate warmed further, species were “likely to experience range shifts, expansions or contractions” and further investigation was needed to “understand which species benefit and which lose out.”

Since majority of the research on clouded leopards is restricted to state-protected areas, the researchers have encouraged more surveys, conducted “ethically, equitably and collaboratively with local people”, within non-state forests, especially in the Northeast.