Sources say that one of main reasons IPS officer Rupin Sharma was not wanted by the ruling government is because he stopped the back-door appointments in police and formalised every recruitment process. 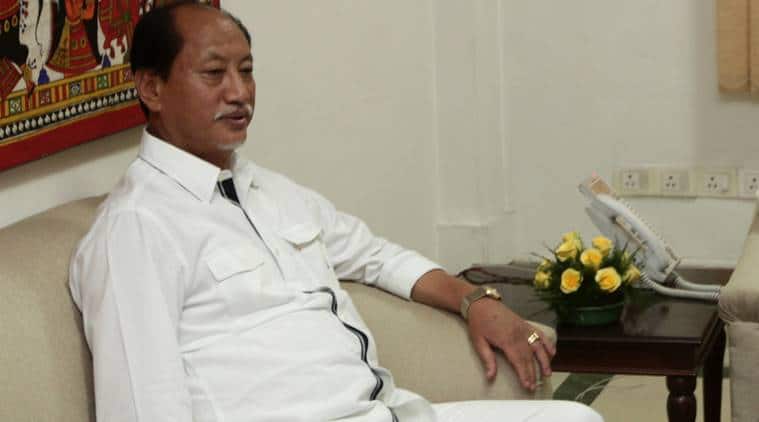 Nagaland Chief Minister Neiphiu Rio said that Sharma does not have the “requisite experience” to be posted as the DGP. (Express Photo By Amit Mehra)

Civil society groups in Nagaland on Monday held a demonstration in Kohima and started a signature campaign cross the state demanding that the incumbent director general of state police is retained. The issue of 1992 batch Nagaland-cadre IPS officer Rupin Sharma (51) continuing as the DGP became a bone of contention between the government and civil society groups ever since chief minister Neiphiu Rio, deputy CM Y Patton and chief secretary Temjen Toy wrote letters to home minister Rajnath Singh in March seeking Sharma’s replacement.

As planned, scores of people carrying banners “Retain People’s DGP” had gathered outside the police headquarters (PHQ) in Kohima in the morning and demonstrated — although the gathering was not allowed to enter the premises of the PHQ. Signature campaigns have also been started — and expected to go on over the next two days — are also planned at other parts of the state, including Dimapur.

“He (Sharma) is a people’s DGP and an honest officer. He has done several good things for Naga people and has effected positive changes in functioning of the police department. Therefore he is enjoying full public support,” said a senior administrative officer at the PHQ, on the condition of anonymity.

On several Nagaland-based Facebook groups too support has poured in for Sharma, with members coordinating for the signature campaign for a show of mass support. Several posts highlighted that Naga society wanted Sharma to continue as the DGP because he is upright and incorruptible.

“This is a fight for the right against the wrong. It’s not a fight for religion or race. After a long time, Nagaland got to see an honest and transparent officer that we have been longing for years. The government does not want him so that they can do whatever they want,” said Pito Swu, the founder of The Naga Mirror, which claims to be the largest Facebook group in the state.

An open appeal to the President of India by the forum Concern People of Nagaland said, “Young Nagas are driven to Insurgency as a result of the blatant manipulation of the system by the corrupt. Funds, Jobs, Benefits and Opportunities are seized by the corrupt and their cronies while the ordinary citizen is left with nothing. Amid this chaos, disorder and darkness, Mr. Rupin Sharma has emerged as a beacon of hope for all the people of Nagaland. In the few short months that he has held the office of the DGP, he has done what no other Politician or Officer has ever done for the people of Nagaland.”

Sources say that one of main reasons Sharma was not wanted by the ruling government is because he stopped the back-door appointments in police and formalised every recruitment process. Of Sharma’s several achievements as a top cop, he was a key officer (then with the CBI) in tracing gangster Abu Salem in 2005 which consequently led to his extradition.

In his letter dated March 24, 2018, Rio said that Sharma’s appointment as a “stop gap arrangement” with approaching state elections after the deputation period of the former DGP L Doungel — a 1987 IPS officer of the West Bengal cadre — ended in November last year.

Rio had further alleged that of Sharma’s 26 years of experience he had served mostly outside of Nagaland. Rio had said that Sharma does not have the “requisite experience” to be posted as the DGP and thus requested someone with suitable seniority.

Chief secretary Toy had alleged in his letter dated March 27 that Sharma’s inexperience led to “challenges and issues in the conduct of the state assembly elections in February 2018”.

“Actually in order to become a DGP in other states, one has to have completed 30 years of service, but in the case of Nagaland, as a special category, up to 28 years have been considered during the past years,” the letter from Patton dated March 28 said.

After the letter surfaced in public domain, the opposition Naga People’s Front had said in a statement that it was alarmed at the move made Patton to replace Sharma “ostensibly over the latter refusing to make back door appointments in the police department as desired by the former”.

Rio and Patton recommended the name of Lungriading, an IPS officer of Assam-Meghalaya cadre from the 1990 batch, for the top police post in the state. Monday’s solidarity demonstration however comes on the heels of unconfirmed source-based reports that Sharma will be replaced by TJ Longkumer, a senior IPS officer posted as an additional director general of police (ADGP) in Chhattisgarh.

Chief secretary Toy told The Indian Express, “The appointment of the director general of police is the prerogative of the government. It is entirely upto the government to decide whom they want to appoint as the DGP.” When asked for a response regarding the hullabaloo over his continuation as the DGP, Sharma told The Indian Express, “I am a government servant and I will abide by government orders and service rules as may be applicable.”