Off Asian Highway-1, a Meghalaya village in want of a doctor and high school

Pahamrioh is a village with about 300 families, most of whom had migrated from near Sohra (new name for Cherrapunji) about 60 years ago at the instance of Rev J J M NicholsRoy, one of the founding fathers of present-day Meghalaya. 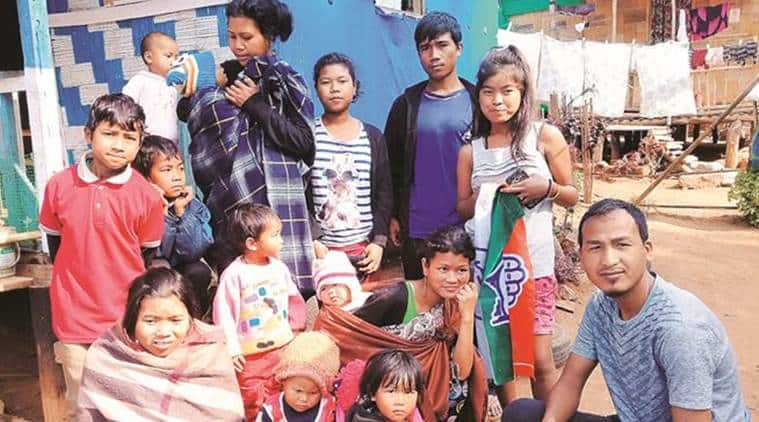 Pahamrioh has 300 families, many trace roots to Cherrapunji. (Photo by Samudra Gupta Kashyap)

At 27, Phoida Situng, mother of a four-year-old girl, regrets she could not study beyond primary school because there was no high school in her village. The nearest high school was 3 km away, and her poor parents could not afford to send her there. “But I doubt there will be a high school in our village even when my daughter grows up and passes Class V,” she said. Her husband Wanbok Star Kurbah is a farmer with not enough land to sustain the family the whole year. “I have a job card, but then last year I hardly got 30 days’ work instead of the 100 that the government had promised. So, I often work for daily wages in other people’s house to make ends meet,” Kurbah said.

Pahamrioh — a village with about 300 families, most of whom had migrated from near Sohra (new name for Cherrapunji) about 60 years ago at the instance of Rev J J M NicholsRoy, one of the founding fathers of present-day Meghalaya — is hardly 60 km north of Shillong the state capital. It is also right on NH 6, which is also part of Asian Highway-1 that technically connects Tokyo in the east to Istanbul on the west. The word Pahamrioh, in the Khasi language, means a place identified by markings on the pine tree.

Phoida’s brother Injohn Suting, 25, did go to the Pahamrioh Government LP School, but, like her, not beyond that. “We are poor and my parents could not afford to send me to the high school at Nongpoh, 3 km away,” Injohn said, blaming successive MLAs of Nongpoh constituency for not bothering to set up a high school here. “We don’t even have a house of our own. In some other villages poor people have got Indira aawas Yojana houses from the government. The rented house in which we live does not even have a toilet, and we have to use a neighbour’s toilet. It is so embarrassing,” Injohn’s wife Saitlang Khongjoh said.

Rishisha Suting, a mother of three whose husband Shanborlang Nongseij works as a truck driver, has set up a small shop selling readymade garments that a vendor brings for her from Guwahati every month. “There is very little scope to earn money because we don’t have enough farmland in this hilly area,” she said. Rishisha dreams of seeing her daughter, her eldest child, become a doctor. “But I think that dream will die as a dream,” she said.

When it comes to elections, residents of Pahamrioh see it as a ritual that has not helped improve their living conditions. “The government water supply is erratic, forcing people to collect water from streams and natural springs that are gradually drying up over the years. Parties and candidates do promise us better water supply and a health centre with a doctor, but then that has remained a promise all these years,” said village secretary Nel Ryndong, who thanks his parents who had enough to afford to send him to college and obtain a BA degree.
Political parties have started sending their local leaders to meet and the people. The Congress even put up a banner, with Rahul Gandhi’s photo in it, atop the house of village headman Kobarson Suting.

“They came and put up that banner. What could I do?” he said. The headman, who too had studied only up to Class V, has a list of problems faced by the village ready on his lips. “Drinking water and toilets are most lacking in Pahamrioh. Most people bring water through pipes from the jungle in the hills above. Moreover, though our village is on this so important highway, there are hardly any road inside the village, forcing people to take slippery muddy tracks, which are risky during the rainy season,” he said.

George Tangsang, 47, a farmer, said over 90 per cent of the village youth are either jobless or without any proper livelihood, mainly because of the absence of a high school. “Only three or four have government jobs, that too peon and chowkidar types. We sell broomsticks, betel-leaf, betel-nuts and bananas. But then we get very low prices. It is the middlemen from Shillong or Guwahati who make the highest profits,” Tangsang said.

Pahamrioh Government LP School headmistress Successfully Kishiar said while only children from poor families are enrolled in her school, the attendance is not regular. “This is a Khasi-medium school where only poor children have enrolled. Attendance is not regular because parents often make their children work either at home or in the fields. The better-off families send their wards to English-medium schools in Nongpoh town,” Kishiar said.

Headmistress since 1987, Kishiar connects poverty and lack of high school facility to rampant child marriage in the area. “Last year I heard of at least 10 girls below 18 getting married in Pahamrioh and adjoining villages. Nothing else can be do with them, their parents marry them off,” she said. “Moreover, not all children have been enrolled in schools in this entire area. You can see children working in tea stalls, dhabas and garages right on the highway,” she said.

Seven candidates are in the fray from Nongpoh assembly seat, two of them women — Marian Maring of the BJP and Rona Khymdeit of the United Democratic Party. The Congress has replaced sitting MLA and former chief minister DD Lapang with Mayralborn Syiem. AAP too has fielded a candidate, Dedrict Binong, from Nongpoh.