Meghalaya mine: Rescuers wait for water level to drop more; 5 trapped for 11 days

Meghalaya Chief Minister Conrad K Sangma said that the condition is difficult for the rescuers and efforts to reach the trapped miners are making little progress. 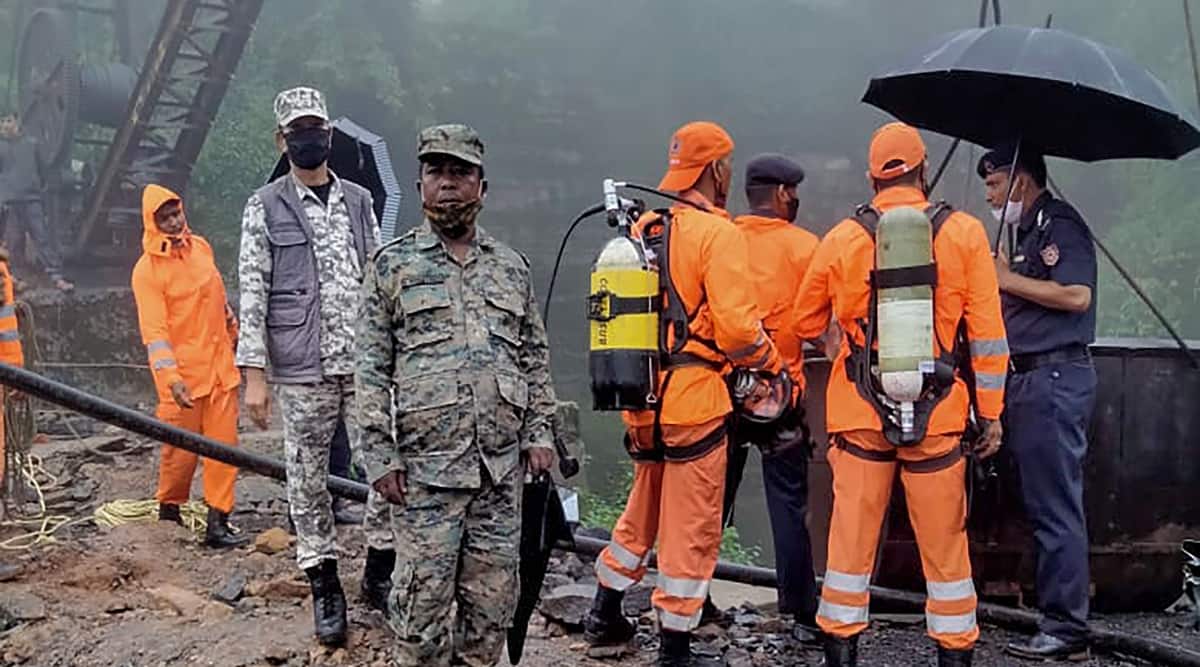 The water level inside an illegal coal mine where five miners remain trapped for the past 11 days in Meghalaya’s East Jaintia Hills district has come down to an extent, but that is not enough for the rescuers to start operations inside, an official said on Thursday.

He said that the dewatering process is on and the water level inside the vertical shaft of the coal pit has decreased to about 36.6 metre from 46 metre recorded on June 4.

Around 60 personnel of the National Disaster Response Force (NDRF) and various state agencies are waiting for the water level to come down to about 10 meters in the 152 metre-deep pit, as that is the maximum level in which they can work, a magistrate posted at the site at Umpleng told PTI.

A total of 8.82 lakh litre of water has been pumped out of two interconnected shafts so far, the official said.

Meghalaya Chief Minister Conrad K Sangma said that the condition is difficult for the rescuers and efforts to reach the trapped miners are making little progress.

“The conditions are very difficult out there. We have not come out with positive results as of now,” Sangma told reporters.

The rat-hole mine at Umpleng, about 20 km from Khliehriat, the headquarters of East Jaintia Hills district, was flooded after a dynamite explosion on May 30.

Hazardous rat-hole coal mining is not permitted in Meghalaya after the National Green Tribunal (NGT) banned it in 2014.

At least five people have been identified by the district administration – four from Assam and one from Tripura – who are stuck somewhere inside the mine.

Six co-workers of the trapped miners escaped the tragedy as they were outside the mine at the time of the incident and they have been escorted to their homes in Assam.

East Jaintia Hills district deputy Commissioner E Kharmalki said that family members of the trapped miners from Assam visited the accident site and all help was extended to them.

The police have arrested the owner of the coal mine, Shining Langstang, and charged him with violation of the NGT order banning unscientific mining and transportation of coal.

The ‘Sordar’ (mine manager) is on the run and a lookout notice has been issued since he was the one who brought migrant workers from Assam and Tripura to work in the illegal mine, a senior police officer said.

Based on the account of the survivors, an FIR was registered.

The Umpleng accident is similar to one in which an illegal rat-hole mine in Ksan area of the same district was flooded on 13 December 2018.

Only three bodies were retrieved from inside the mine in a joint effort by the Navy, Army, and the NDRF, and seven months after a futile search for the bodies of over 15 miners who were trapped in the mine, the operations were called off.

Another coal mine in the South Garo Hills district had flooded in 2012 and locals had claimed that 15 labourers had died but their bodies were not found.

Material seized in Bokaro not uranium and not radioactive: MEA