Often kept as a pet in countries like Thailand and Vietnam, the rare jumping spider — the Hyllus diardi — was discovered in India, between two leaves, by a PhD scholar in a forest in Assam’s Kokrajhar district. Acta Arachnologica, a Japanese journal of Arachnology, has officially confirmed the identity of  ‘Hyllus diardi’ in Kokrajhar — the first of its kind to be spotted in India. Photo Courtesy: Paris Basumatary

When he first spotted the spider in March 2016, cocooned between two leaves, Paris Basumatary took a photo and put it up on Instagram. His carefully curated grid featuring spiders of all shapes, sizes, colours — interspersed with an occasional picture of a snake or a frog— has a modest following of 130. However, among them are many self-confessed “Arachnophillics” obsessed with the eight-legged arthropods, much like Basumatary himself.

“One of my followers from Hyderabad — also a keen researcher of spiders — commented on my post saying it was probably the jumping spider or the ‘Hyllus diardi’,” says Basumatary. For the 25-year-old, who is currently pursuing his PhD on spiders from the Bodoland University’s Zoology department in Assam’s Kokrajhar district, that was news. This specific spider was last spotted in China in 1998, before that in Vietnam in 1985, in Indonesia and Myanmar in the 1800s — and never in India.

So, in the following months, Basumatary began his dogged quest for the jumping spider of Kokrajhar — aided by his guide Dr Dulur Brahma of Bodoland University. Nearly one and a half years later, earlier this month, Acta Arachnologica, a Japanese journal of Arachnology, has officially confirmed the identity of  ‘Hyllus diardi’ in Kokrajhar — the first of its kind to be spotted in India. The paper published has been co-authored by Basumatary, Brahma and Guwahati University’s Sangeeta Das and Jatin Kalita. “Sangeeta is another scholar who helped me take microscopic photos of the specimen and did the sketches and diagrams. And Professor Kalita is her guide,” says Basumatary.

However, much before the documentation, Basumatary spent many nights “on field” trying to spot the spider after his first ‘accidental sighting’. “Juveniles and sub-adults are not eligible proof for identification. What I first saw was a juvenile. And for the longest time after, we could not find an adult,” says Basumatary. Finally during a “nocturnal survey” last March, an adult female was spotted at 10 pm in the Jharbari forest range of Chirang Reserve Forest, with the help of a local villager, Pobi Das Nazary. “The back and forth took almost a year. Many places rejected our findings. But it is finally done and it just goes to show how much potential the region has. I am certain there are many more undiscovered species,” says Basumatary. 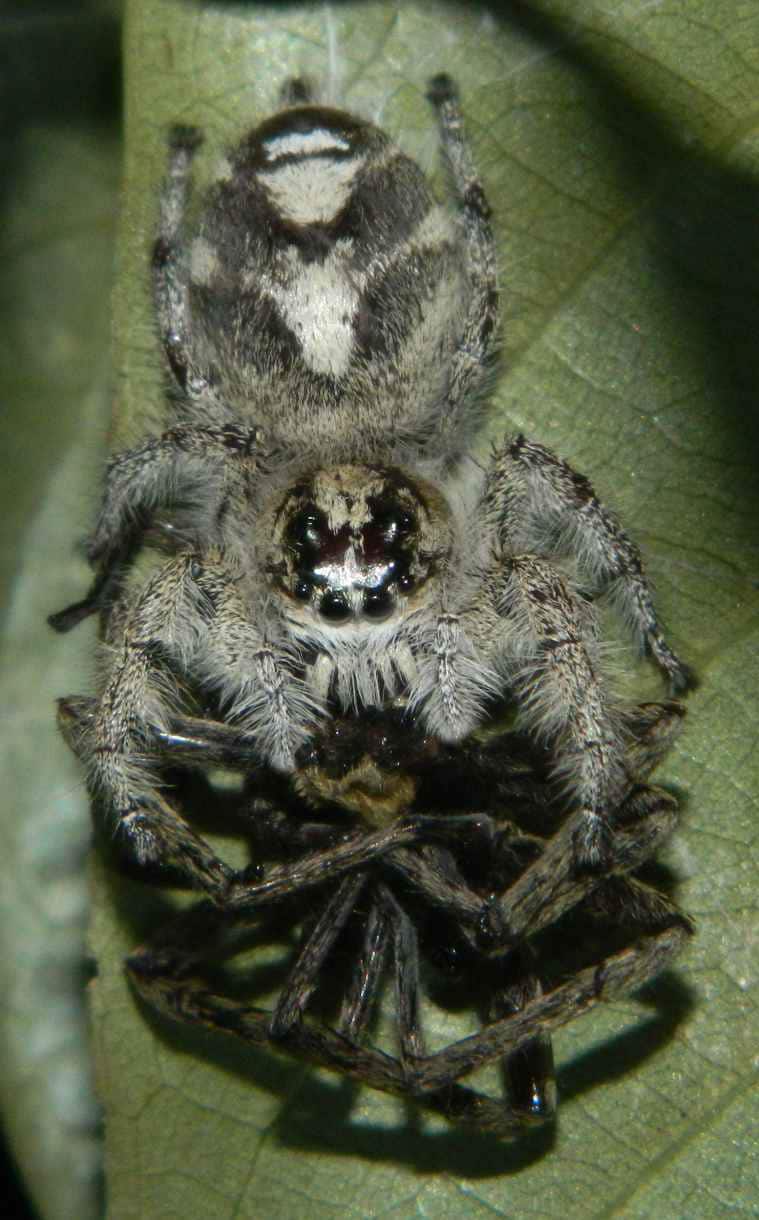 The Hyllus diardi is a spider species active only at night — during the day, they hide under leaves. Photo Courtesy: Paris Basumatary

According to reports, nearly 13% of the global spider population is constituted by the jumping spiders family called Salticidae. “In the Northeast, there are very few people who work with spiders. I think it is just four or five of us,” says Basumatary, “Who does taxonomy these days anyway? Firstly, it is time-consuming. You’re in the field for hours, you’re often at the mercy of mother nature. You have to be really passionate to pursure this.” In the Northeast, while there has been a bit of work in western Assam, all of upper Assam remains unexplored. In other parts still — in Guwahati and Tinsukia — there are recorded sightings of tarantulas locally known as ‘Bhaluki mokoras’.

Often, according to Basumatary, it is not easy to do research in many areas of Assam, which are known to be “disturbed”. “Especially at night — which is unfortunate because many spiders are nocturnal. You do not get permission easily. But we did for this one,” says Basumatary. The Hyllus diardi is a spider species active only at night — during the day, they hide under leaves. “In fact, they do not weave webs. Their home is made out of two leaves which they weave together with silk,” says Basumatary.

Adds his guide, Dr Brahma, “All spiders are similar morphologically. You have to go into scientific specifics to tell one from another. This one is commonly known as the jumping spider because well, it jumps a lot, and while most spiders do jump and crawl, the Hyllus diary leaps up to quite a height.”

The Hyllus diardi is also the biggest spider in the jumping spider family. “Also one of the most beautiful. It’s white with a lovely chevron pattern,” says Basumatary, adding that while most people feel scared, he is fascinated by spiders. “Not many people know — but in Thailand and Vietnam, many raise the Hyllus diardi as a pet. It is actually an extremely friendly species and curious about humans, too,” says Basumatary. “People are worried that spiders are venomous. But the fact is that most spider fangs can’t penetrate human skin. The how does the question of venom even arise?” he asks.