‘They called us illegal. How is it possible?’ Family declared Indians after year in detention

In June 2019, as the couple were arrested and sent to the detention centre in Goalpara district, their world collapsed around them. 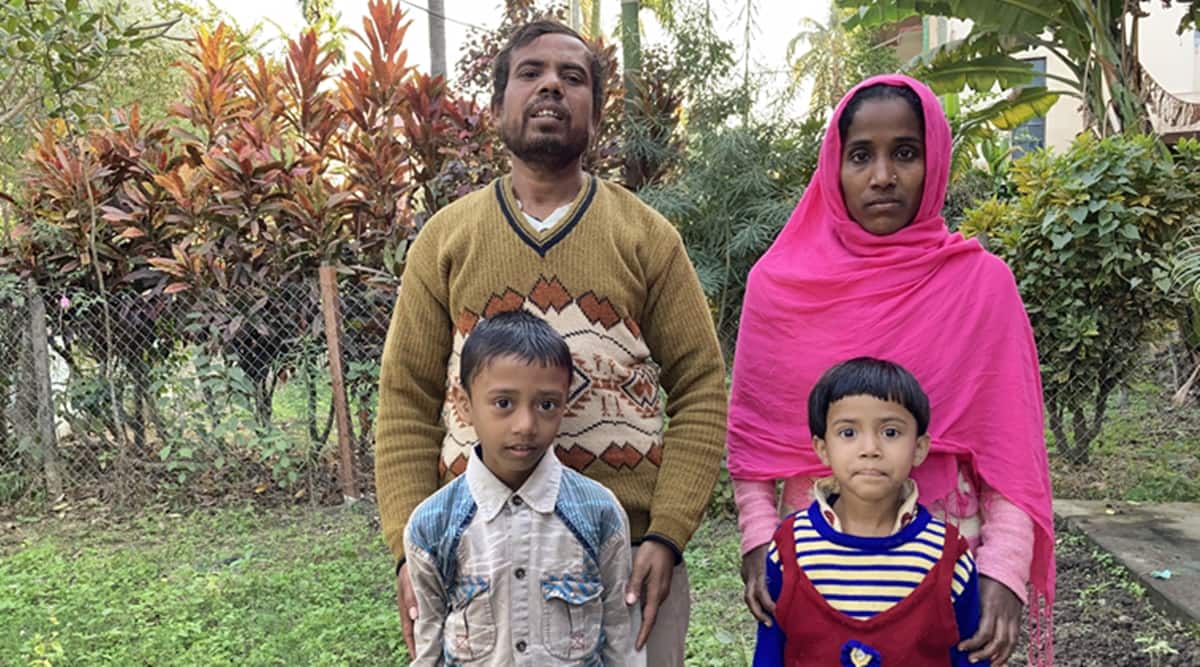 After a year-and-a-half in a detention centre as ‘illegal foreigners’, the New Year has brought freedom and citizenship to Mohammad Nur Hussain, 34, his wife Sahera Begum, 26, and their two minor children, who have been declared Indians in a re-trial by a Foreigners’ Tribunal (FT).

“We are proud Indians. We belong to Assam. They wrongly accused us of being Bangladeshis and said we illegally crossed the border. How is that possible? I was born here,” Hussain, a rickshaw puller in Guwahati who hails from Lawdong village in Assam’s Udalguri district, told The Indian Express on Wednesday.

While the names of Hussain’s grandparents feature in the National Register of Citizens (NRC) of 1951, his father’s name, along with that of his grandparents, was in the 1965 voters’ list. Begum’s father too had appeared in NRC 1951 and the voter list of 1966, and the family has land documents dating back to 1958-59. The cut-off date to identify an Indian citizen in Assam is March 24, 1971.

Yet, none of this was worth much as police in Guwahati began investigating the couple’s citizenship credentials in 2017. In August that year, Begum’s case was referred to FT No. 4 of Kamrup (Metro) district and in January the following year, the same was done for Hussain.

“We are both unlettered and were in no position to make sense of the documents or what we were supposed to do,” Hussain said.

While Hussain managed a lawyer for himself by paying Rs 4,000, his wife went unrepresented at the tribunal. On August 28, 2018, however, Hussain’s lawyer pulled out of the case, after which he missed successive hearings at the FT.

Foreigners’ Tribunals are quasi-judicial bodies that give opinion on whether a person is an ‘illegal foreigner’ or not. FTs hear cases of those referred by the state police and those marked Doubtful Voters by election authorities. Till July 31, FTs had got 4.34 lakh cases, of which over 2 lakh have been disposed.

“The lawyer told me that I would not be able to afford his fee and other expenses. He said I should consider fleeing Guwahati or else police might arrest me. But I told him, ‘Why should I flee? What wrong have I done?” said Hussain.

On May 29, 2018, the FT declared Begum a ‘foreigner’, and Hussain was declared one on March 30 the following year. Section 9 of the Foreigners’ Act says the onus of proving that a person is not a foreigner lies on the person. Thus, when he/she does not appear before the FT, the member can proceed ex parte.

In June 2019, as the couple were arrested and sent to the detention centre in Goalpara district, their world collapsed around them.

“There was no one to take care of the children. Our relatives are in the village, so we took our children (aged 7 and 5) with us to the detention centre,” Begum said, adding that her elder son Shahjahan had to be pulled out of school.

“In jail, my children kept saying they wanted to return home,” she said.

With the couple in jail, some of their relatives reached out to Aman Wadud, a Guwahati-based human rights lawyer, who, along with advocates Syed Burhanur Rehman and Zakir Hussain, represented them in the Gauhati High Court and later on in the FT.

“Not everyone who is accused of being a ‘foreigner’ gets lawyers. Many Indian citizens are becoming stateless because they can’t even afford legal representation,” Wadud told The Indian Express.

On October 9, the HC set aside the FT’s orders and ordered a retrial.

On December 16, a couple of weeks after the couple walked out on bail, the FT declared Hussain an Indian citizenship.

On Wednesday, Begum too was cleared of the foreigner tag. That day, as the lawyers and the couple celebrated the verdict, Wadud asked little Shahjahan, “What will you become when you grow up?” “Ukil (lawyer),” the 7-year-old replied.

Shramik Specials: ‘When the train left, we broke into an applause… It was spontaneous’