Assam bandh Highlights: The government passed the Citizenship Bill in the Lok Sabha amid protests by the opposition. At least five people, including two who sustained bullet injuries, were reportedly injured during a clash between policemen and North East Students’ Organization (NESO) supporters at the headquarters of the Tripura Tribal Areas Autonomous District Council (TTADC), 25 km away from Agartala. The All Assam Students’ Union (AASU) along with 30 other organisations called for a state-wide 11 hours shutdown on Tuesday, from 5 am to 4 pm, protesting against the scheduled tabling of the Citizenship (Amendment) Bill, 2016 in Parliament.

Assam, on Monday, witnessed public protests and demonstrations by civil society groups and AASU against the Bill and black flags were raised in Guwahati against the NDA government. On Monday, the Asom Gana Parishad (AGP) withdrew from the alliance with Bharatiya Janata Party in Assam as it failed to convince the Centre that the Bill would “nullify the ongoing updating of the National Register of Citizens”, AGP president Atul Bora said on Monday. Referring to a meeting he had with Union Home Minister Rajnath Singh, Bora said that the Bill will be passed in the Lower House today.

Tripura government suspended SMS and mobile internet services for the next 48 hours following violence over the Citizenship Amendment Bill.

State Minister Himanta Biswa Sarma said that the Asom Gana Parishad (AGP) has committed a "historic blunder" by not extending support to the bill and has betrayed the Assamese.

The government introduced the Citizenship Bill in the Lok Sabha amid protests.

The Asom Gana Parishad (AGP) accused Chief Minister Sarbananda Sonowal of not respecting the interests of the Assamese people and "not cooperating" on the Citizenship Amendment Bill.

At least five people, including two who sustained bullet injuries, were reportedly injured during a clash between policemen and North East Students’ Organization (NESO) supporters at the headquarters of the Tripura Tribal Areas Autonomous District Council (TTADC). Police resorted to a mild lathi charge after agitators blocked the national highway and burnt down shops.

Biju Janata Dal MP from Cuttack Bhartruhari Mahtab said he had recommended to the Joint Parliamentary Committee (JPC) to include Sri Lanka in the Bill. "The minorities don't have an option," he added. As many as six members of the Joint Parliamentary Committee (JPC), which examined the Citizenship (Amendment) Bill, gave their dissent notes on the report of the panel. Mahtab had stated that the Bill contravened provisions of the principal Act and ran counter to the spirit of the 1985 Assam Accord.

The protest over the Citizenship Bill turned violent as agitators clashed with the police, gheraoed Chief Minister Sarbananda Sonowal's house at his native place in Dibrugarh, blocked national highways and damaged vehicles during the 11-hour northeast bandh called by the All Assam Students' Union (AASU).

People vent their ire against the Citizenship Amendment Bill in Aizawl, Guwahati
Congress walks out of Lok Sabha amid Citizenship Bill debate

Congress walked out of Lok Sabha during debate over the Citizenship Amendment Bill, 2016. Before the Congress walked out of the Lok Sabha, Mallikarjun Kharge requested the Speaker to send the Citizenship Bill to a select committee as it was related to a Constitutional matter. Home Minister Rajnath Singh said, "The countries where minorities were subjected to violence have only been able to find safe shelter in India. We regulated their entry, stay in India, but despite these changes, they cannot apply for citizenship as they are considered migrants."

No person will face discrimination, law will imply to all states: Rajnath Singh in LS

"Assam is facing problems due to illegal migrants. This law is for people of India and no person will face discrimination under this Bill. The law will imply to all states, it is not restricted to Assam. The bill is introduced to guard people's interest," Union Home Minister Rajnath Singh said Tuesday in Lok Sabha.

The Citizenship (Amendment) Bill, 2016 was tabled today in Lower House as scheduled.  The Home Minister had earlier said Clause 6 "wasn't fully implemented" and the notification came days after the Union Cabinet cleared a proposal to set up a high-level committee.

Glimpse of protest in outskirts of Guwahati 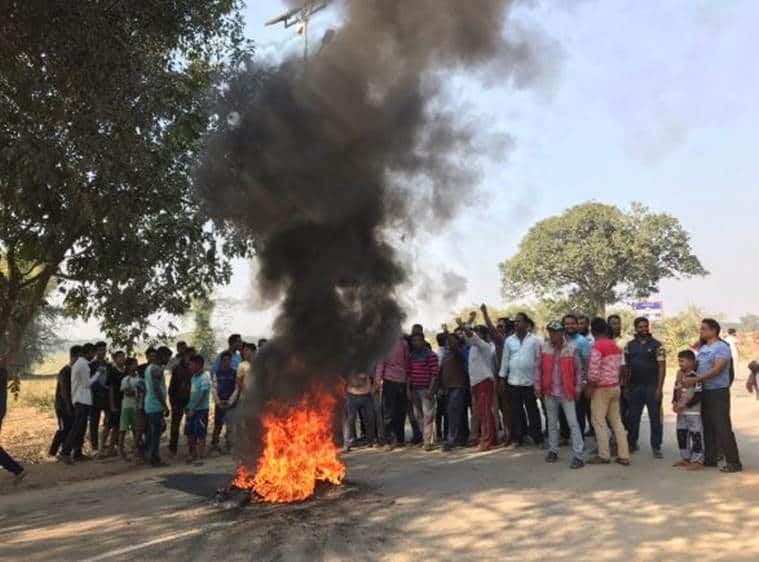 Scene from a protest on the outskirts of Guwahati on Tuesday against the Citizenship Bill, 2016. @IndianExpress pic.twitter.com/9nTsnCU1Jh

Protesters in Assam, Tinsukia, have burnt tyres, vandalised a hospital canteen and burnt BJP posters in the town. Railway tracks in Makum, Assam have been blocked by agitators. No miscreant who disturbs the peace can escape the hands of law: Assam Police

The Assam Police took to Twitter stating no person can escape the hands of law disturbing the peace of the state. Further, it requested people to not support such "anti-social elements".

No miscreant who disturbs the peace can escape the hands of law. Pls don’t support such anti-social elements. They are destroying not only public/private property, but also the social fabric. https://t.co/dRJ1xXRIfQ

#AssamBandh | Protestors at the DC Office in Dibrugarh.

In pictures: Effects of bandh in Manipur

AMSU volunteers blocked roads by piling stones to hinder early morning traffic, however, the police removed all roadblocks in some time. 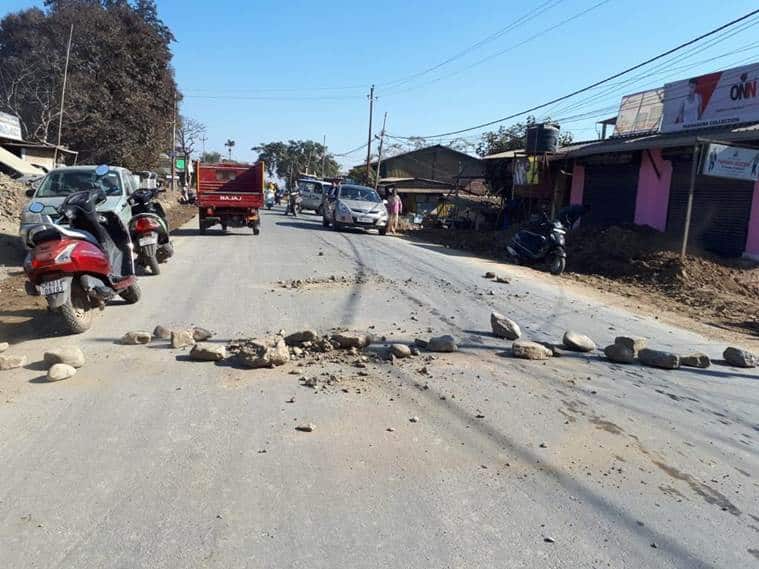 The northeast 11-hour bandh has left its mark on Manipur as well and normal life has been disrupted as business establishments remained shut and public transport was off streets. 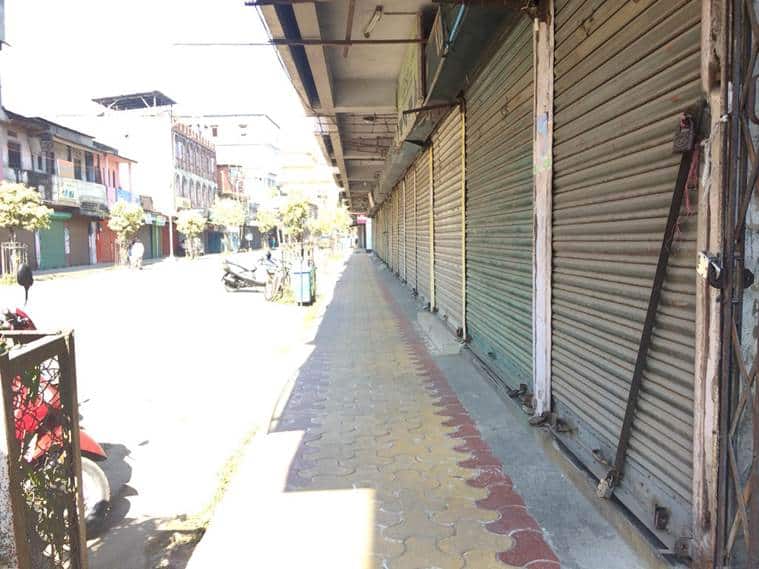 Innovative protest by @AITCofficial MPs to withdraw Citizenship Amendment Bill and protect Indian citizens, near the statue of Mahatma Gandhi inside #Parliament

People have been pelting stones at moving vehicles and trucks in Nalbari, district in Assam. Several vehicles, including private vehicles and auto rickshaws, have been damaged by protesters in Azara, outskirts of Guwahati. Agitators across Assam are carrying demonstrations by burning tyres and voicing slogans in Baksa, Lakhimpur, Dhemaji, Tezpur, Golaghat.

The 11-hour bandh started amid tight security at 5 am. Tyres were burnt at various places in Assam and vehicles were damaged in Guwahati, Tinsukia and Dibrugarh districts, the police said, as quoted by PTI.

Apart from vehicles, railway tracks were blocked for a while in Guwahati and Dibrugarh district, however, trains resumed after the GRP removed protesters from the tracks, railway sources said, as quoted by PTI. Train and flight schedules remain unaffected. Shops, market, financial institutions, educational institutions, private offices remained closed and private vehicles, including buses, kept off roads. People faced difficulty reaching their workplace as there was no availability of public transport, bringing normal life in the state to a halt.

Clause 6 of the Assam Accord states that immigrants up to the cutoff date, March 24, 171, would get all rights as Indian citizens, as explained by former Chief Minister Prafulla Mahanta, one of the signatories to the 1985 Accord as then All Assam Students Union (AASU) president. Therefore, he said, Clause 6 was inserted to safeguard the socio-political rights and culture of the “indigenous people of Assam”.

The movement on the clause started in 1998, when the Home Ministry set up a committee under G K Pillai to implement Clause 6 fully; in 2006, the state government set up committee to help define "Assamese" and five years later, it constituted a Cabinet sub-committee to deal with Clause 6.

NESO — the umbrella student body representing all the states — has also called for the bandh across seven northeastern states. (PTI photo)

The North East Students’ Union (NESO) — the umbrella student body representing all the states — has also called for the bandh across seven northeastern states, which is being supported by the AGP, the Congress and 30 other ethnic organisations from Assam. The decision to call for a bandh was taken immediately after Prime Minister Narendra Modi's rally at Silchar on January 4, where he stated that the Bill will be passed by Parliament soon.