Author Aruni Kashyap on his new book, his identity as an Assamese writer, and the physical and psychological divide between the mainland and the Northeast. Aruni Kashyap’s new collection of stories, His Father’s Disease (Context; Rs 400), is about Assamese people everywhere — Teteliguri, Guwahati, New York, Minnesota. The characters flit between far-flung places, as they do between cultures, much like the author himself. Kashyap, an Assistant Professor of English Literature and Creative Writing at the University of Georgia, hails from Assam, and spent much of his childhood between Guwahati and his village Teteliguri, before moving to Delhi and more recently, America. In this interview, he speaks about his new book, his identity as an Assamese writer, and the physical and psychological divide between the mainland and the Northeast.

In your book, the two themes that hold most characters together are migration and displacement by insurgency. What made you choose these themes?

I don’t think I chose those themes. As writers, we set out to tell stories about people and these are two historical processes that have shaped my life. One of my favourite writers, Tayari Jones, says that we should write about people and their problems and not problems and how people negotiate those. I believe any writer of fiction writes about people, and then their problems, and in my case, it is the insurgency and displacement.

Sometimes writers/filmmakers feel the need to come back and rediscover their hometowns to write/make a film. Do you feel the same way, or does the distance of a couple of continents help?

I think I am one of those writers who like the distance. In Assam, my senses are too alert. I am replenishing myself constantly: my soul, my body, my lungs. In Assam, I hoard, I listen, I see. Then let it all marinate. But to answer your question, I never really felt the need to ‘rediscover’ or come back because wherever I am, I am partly living in Assam. In America, I wake up in the morning and watch Assamese prime time news and crib about it. I regularly read Assamese papers. Every week, I talk to my relatives in Mayong and Teteliguri. Also, even during the years as a migrant student, I visited Assam twice a year, for long stretches. So I was never truly away from Assam.

In one of your stories, your protagonist is peeved at the expectations the ‘mainland’ has from a writer from the Northeast: write on insurgency and violence. Did you ever feel the same kind of pressure?

People in Assam have asked me to write about the ‘good things in Assam’, because everyone just knows about ULFA and Assam’s ‘immigration problem.’ Can you write about our proud history and culture, some ask. In fact, one person was chasing me to write a novel about the ‘flood problem’ in Assam! Another section in Assam is happy that I have written about the insurgency ‘for the world’, but they think I should have talked more about human rights violations in Assam. These are the pressures in Assam because I write in English as well.

Outside, the mainstream literary establishment is mostly interested in the beautiful Northeast, the “museumised” Northeast. I used to be annoyed by these pressures, but reading writers such as Amitav Ghosh has given me the confidence to proudly say that I am an Assamese writer; every other label is incidental, a product of my location, and sometimes, identity.

Your previous book The House With A Thousand Stories is set against the backdrop of insurgency. Your upcoming book is an edited anthology: How to Tell A Story About an Insurgency. Do you ever fear falling into the mainland trope that writing from the Northeast should be of a certain kind?

Absolutely not, because I have also written a magic realist novella set in Teteliguri called Horokanto Bejor Montro Puthibur. I have written a year-long series of essays about life in Delhi as a migrant student for Amar Asom (an Assamese daily). I have written a novella called Somironor Pasot. It is set in Guwahati about the rickety relationship between a mourning mother and her dead son’s girlfriend, and I have written a novel set in Minnesota in Assamese that was released this month.

Anyone who thinks I write only about the insurgency is poorly read or has done lousy research because this information is available online. If the Indian literary establishment has unimaginative and different standards for me, they may, but those are not the challenges and artistic concerns I set out for myself when I write. 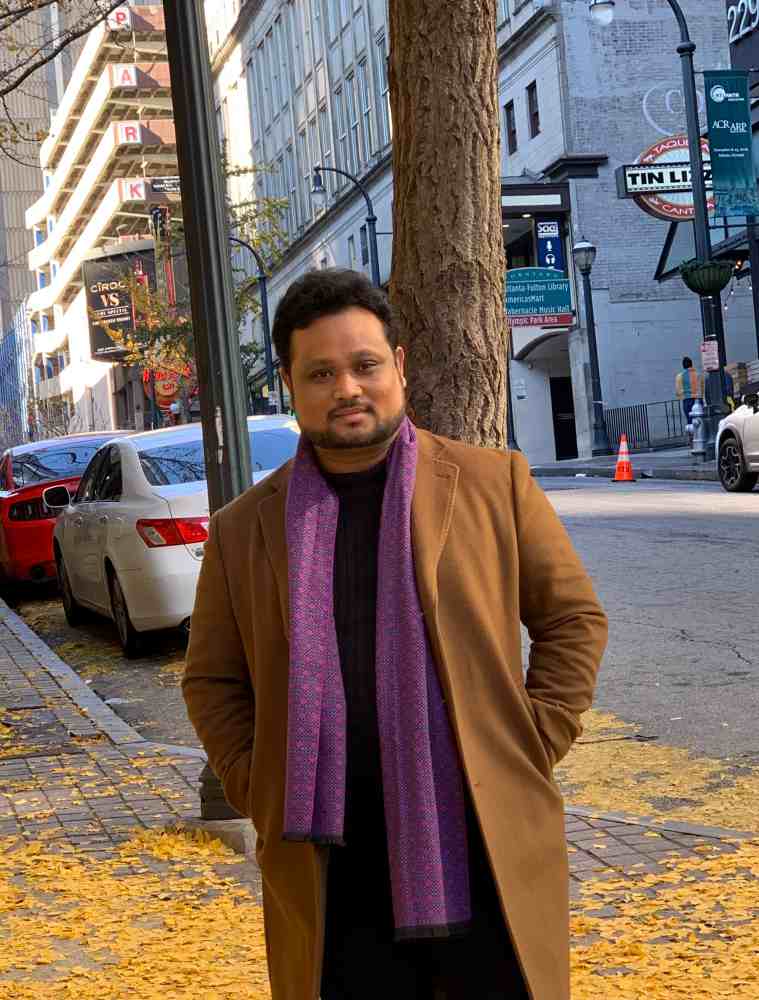 In some of the stories, there are oblique references to the ‘illegal infiltration’ issue in Assam. Yet, in the same breath, your character, Himjyoti, develops a close friendship with a Bangladeshi boy in America, probably something he would not dream of doing in Assam. Is this your way of making a larger point about the events that are currently unfolding in Assam?

I am friends with a number of people who are descendants of immigrant Muslims. We are all born in Assam and we have equal stake in the state. I would consult these people if I am in doubt, because they have far better knowledge about the ground realities in Assam. No one I know makes these distinctions in our everyday life — it is only a very small, vocal, toxic minority who is polarising the climate, and social media magnifies it.

In my world, we all love Assam and care about the health of the state. So no, Himjyoti would have ample opportunities to be friends with immigrant Muslims if he didn’t grow up protected like upper-class and upper-middle-class people in Assam. I am not sure if I was trying to make a larger point, but I soaked those small things up like a sponge because the spectre of the Bangladeshi immigrant is a constant presence in the Assamese imagination. Abroad, I can actually relate the most to Bangladeshis: our love for Bhupen Hazarika and Runa Laila, for Humayun Ahmed and Ashapurna Debi and of course, Beder Meye Jyostna. I wanted to celebrate that because that is the least I could do in a story.

The National Register of Citizens (NRC) and ideas of identity and citizenship in Assam have polarised opinions. As an Assamese living outside Assam, do you feel that the Assamese side of the story (when it comes to the NRC) is not being told enough?

I absolutely feel that multiple sides of the story haven’t been told, and there is a lot of misrepresentation and misreading. The NRC has been implemented in a horrific, dehumanising way. Rightly so, the focus of the reportage around the world has been on the suffering of people. But there is little conversation about why the NRC was required in the first place.

Yes, I do get questions about it, but it is not my intellectual labour to explain. I do that in my fiction. If anyone wants to know what I think about the issue of immigration in Assam, they would have to read and analyse my Assamese novels and novellas and my translation and editing projects. I don’t know what the solution is, I just know that the only way to go forward is peaceful co-existence and construction of a tolerant society that will protect everyone living in Assam. Assamese-speaking Muslims of Bengali origin have contributed immensely to Assam, and we must talk more about that to create a climate of tolerance.

In July, an FIR was lodged against a group of Miya poets in Assam. Do you feel faultlines of identity and language have become sharper in the current scenario? And what role do writers and poets have in salvaging this?

It was unfortunate and in many ways reflective of the crisis of free speech in India. I was horrified and worried about the poets because I know some of them personally. I think it shows the power of literature and storytelling to heal, to represent, to make a political point, to be subversive. I didn’t follow the debate as well I would have liked to. Also, Assam’s intellectuals were actually divided. Even descendants of immigrant Muslims were divided.

On the other hand, I was looking at the positive side: that something called Miya Poetry had emerged that would enrich literature from Assam, and I hope more people would write about it, more people would compose such poems. Ironically, I was also hopeful —  because I am a hopeful fool — that prime time news debates were discussing poetry!

You had once commented that you are a ‘political writer’. Is this by choice or because of the context you have grown up in?

It is because that is the kind of fiction that makes sense to me and incidentally, those are the kind of writers — writers who try to make a point through their fiction — who shaped my apprentice years. So, yes, I want to be read politically, but I am often amused when people write about my work without familiarising themselves with the print and oral traditions that I draw nourishment from.

Having said that, being misread and dismissed is an occupational hazard. Being a political writer from a traditionally underrepresented literary space is to be consistently misinterpreted and rejected by the ones in power. The readers who dismiss our cultural productions perpetuate a long tradition of rejection and fetishisation of representations from the region we now call Northeast.

Your village Teteliguri and its many characters feature through the stories. While they are not autobiographical, fiction does tend to borrow from real life. Do you ever write about real-life people — and does that make you uncomfortable?

In fact, I borrow mostly from real life and actual incidents, and that’s why sometimes, it is unbelievable. The events in “Minnesota Nice,” “The Umricans” actually happened to me; the scary incident in “After Anthropology” happened to a friend of mine — just that, in the real story, two friends had gone to another midwestern state for the Thanksgiving break. “Bizi Colony” is highly autobiographical — my friends know that I suffered from depression while growing up and even tried to commit suicide once. I find real life very interesting, and it doesn’t make me uncomfortable to develop characters from real people. By the time they are on the page, they become a new person, and it is not necessarily what I think about them! I always tell my students to take inspiration from real people.