It is easier to change a man's religion than to change his diet.

Please join us for a specially prepared low GI meal, said the host at a workshop on Glycemic Index recently. This isn’t an unusual statement considering the nature of our gathering. But one look at the attendees–health writers mostly–and you’d think they’d been asked to eat monkey brain soup.

It wasn’t anything personal,one said. I just don’t find health foods appealing. Fair enough. How many times have you poked fun at the aunty who is constantly on a diet? Or scoffed at the girl who orders salad at a bar? Let’s not even start with the vegans who have made it their life’s mission to rid us of basics like milk and eggs and have the audacity to create healthy substitutes for apple crumble pie and red velvet cupcakes. 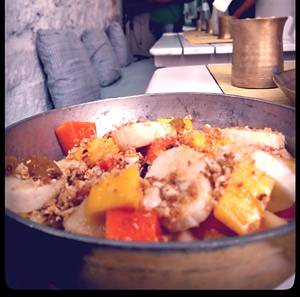 But a rumbling stomach must not be ignored which is why I decided to go have a look at what the buffet had to offer. To my utter delight I met with Asian favourites like Thai curry,Vietnamese basa and raw mango salad in coriander and mint sauce. The recipes are the same. We’ve only added a lot more vegetables, said a chef whose brief had been to skip anything with flour,sugar,whole-fat milk and corn. In turn,the brief to the attendees had been to keep the ratio of rice and carbs to protein and vegetables at 1:9.

Two helpings later,I loosened the buckle on my belt,sat down and began a conversation with myself that hasn’t stopped since. I love vegetables. The more colourful the better! Why then,are food items that are classified as healthy met with lips pursed so tight you’d think people were afraid of being force fed? Would attitudes have changed had they decided to wax lyrical about the chef,possibly a renowned protegee from the best culinary school in the world,instead of pointing out the vegetable-carb ratio?

I decided to get to the bottom of this by making myself some oat pancakes. I don’t know why but I think my mother had some part to play with it. Here eat this. It’s good for you! My Mum has been saying to me since I was 5 years old,shoving a spoonful of mushy oats in my face. And every time she’s been met with the same reaction: pursed lips,an averted face and hands crossed tight on my chest.

But when you learn terms like Glycemic Load and analyse charts on how fast you digest white bread in comparison to whole wheat bread,not to mention animated illustrations of how fast cornflakes release sugar into your bloodstream,you’re bound to make an honest attempt to change.

Of course,change isn’t simple. To quote American cultural anthropologist,Margaret Mead: It is easier to change a man’s religion than to change his diet. To me,this is only partly true because I don’t think its our food habits that need conversion. It’s our innate instinct to rebel against people and foods that insinuate that they know better. (I love you,Mum!)

So yes,I removed my mother’s blender and threw in all the oats I found in the cupboard,emptied the tin of muesli (uncooked rolled oats,after all!) for good measure and ground them to dust. Following the stereotypical pancake recipe thereon,I poured in some milk,though I skipped the sugar because the muesli did have dried fruits in it. Then I spread the thick,creamy paste in a pan with olive oil,waited till it was crusty and brown on both side and savoured it bite for crunchy bite with chocolate syrup (a little treat for being so conscientious). That’s when I realised that maybe,just maybe,oats might not be so bad after all.

What’s more is that since then,paired with boiled eggs or a banana at breakfast,they haven’t tasted awful mushed into warm or cold milk either. Maybe change isn’t so bad after all. It’s just the path to changing that determines how badly we take it. I’m on it now. And I hope to use this space to document some of my adventures in changing perceptions along the way. Until next week then!