The Taliban in our midst

The biggest indoor stadium in Ohio City, USA, was recently alive and vibrant with thousands of people. The event: India Day celebrations. Th...

The biggest indoor stadium in Ohio City, USA, was recently alive and vibrant with thousands of people. The event: India Day celebrations. Thousands of Indians from all religious groups were present and participated exuberantly in the festivities. One could really see the colour of India there. The programme began with the chanting of the Ganesh Vandana, the lighting of the lamp and then a dance, the Bharata Natyam. It was a treat for everyone, including the many Americans who seemed to be enjoying themselves. Outside the huge hall, there were many stalls. Among them was one where a Muslim merchant was selling Tanjore paintings and was proudly explaining to the visitors the mythology they depicted.

Muslims, Christians, Hindus, Sikhs — everyone there felt a sense of belongingness irrespective of religious barriers. It was a celebration of the true spirit of India, which is an all-encompassing, all-embracing one. Compare this with the Taliban, which could not even own their Bamiyan Buddha statues, in spite of the fact that they were priceless historical relics. Against worldwide opposition, they demolished the statues. This Taliban mentality — of admiring terror and promoting divisiveness — which has crept into the Asian continent, is very dangerous. Take a recent report that was published in the Express, ‘State takes saffron out of textbooks’. The Vedas and the Epics, which were always considered as “the sacred books of India”, have now been changed to “the sacred book of the Hindus”.

This way we end up dividing people more and more. Is this not like the Taliban? It is a known fact that Aurangzeb brutally killed thousands, including the Great Sikh Gurus, Guru Tegh Bahadur and the sons of Guru Gobind Singhji. A person who killed his own brothers and put his father in prison is surprisingly called a “zinda pir” (living saint) and a devout Muslim. It is a pity that he has been glorified in our ninth standard textbook.

If our education becomes an exercise in appeasing one community or another, then it is a gross injustice to knowledge and to the truth. Our educators, too, need to be impartial and not hide the facts for sentimental reasons. By praising the aggressors of our country, one is not only praising terror and the terrorist tendencies, but also demeaning the sacrifices made by the Sikhs and the Sikh gurus. Covering up what Aurangazeb did, or refuting the Mughal atrocities and Islamic fanaticism as a threat to India, is distorting history and in turn the truth. Denying it, like denying the suppression of lower castes by the upper castes, will not help the process of creating a harmony in our rich diversity. The terror and the bomb blasts in the country is a result of refusing to acknowledge history. It is enlightening to note that the atrocities of Hitler are deplored not only by the Polish people and the Jews but also by the Germans themselves, so that that dark chapter in the history of the world is not repeated.

Itihaas (which literally means “this is how it happened”) is about highlighting the good so that the coming generations are inspired by it and do not continue to be subsumed by the violence of the past, thus ending up repeating it. Today it is the Vedas being described as “belonging only to the Hindus”, next will come music — “Carnatic music belongs only to the Hindus”. Then will come dance — “Bharata Natyam is only of the Hindus”. This way we will be sowing the seeds of a Taliban mentality for future generations. Disowning one’s culture and segregating traditions is very dangerous for the unity and integrity of the country.

The Vedas are the knowledge of all Indians. Every Indian should feel a sense of belongingness for all that belongs to India, including the language, literature, and spirituality. Indonesia, though an Islamic country, takes full pride in the Ramayana and Mahabharata and regard these epics as an epitome of their cultural heritage. They have a Ganesha emblazoned on their Rupiah 20,000 note. If you visit any university there, you will find a huge statue of Ganesha welcoming you. The Indonesians consider all these as their own. We need to learn from them.

Long ago, the Manuvadis held back all the precious knowledge of yoga, ayurveda and Vedanta and did not impart it to other sections of society. This seems to be the attitude of our educationists today where the textbooks claim that Sanskrit, Ayurveda, Yoga, and so on, belong only to the Hindus and not to all Indians. Dussehra and Ganesha festivals are considered social events. Many Muslims take part in these celebrations wholeheartedly. Karnataka, unlike Hyderabad, has had a history of communal harmony. Members of different religions have been enthusiastically participating in the festivals of other religions. But the Karnataka education system, instead of keeping alive this tradition of uniting people, is actually dividing India in the name of de-saffronisation. The common man does not want these types of political games and counter-games to enter the arena of education. If this is not curbed right now, our next generation will face serious the consequences of divisions within communities that portend the rise of the Taliban mentality.

Once Holi was being celebrated in Botswana with traditional Indian songs and bhajans. Everyone was swaying to these tunes, except our own high commissioner, who felt very much out of place because he was a Christian from the Northeast. An instance like this points to a faulty education, one in which we are not teaching our children to accept all the wisdom in the world as their own. To say that Ayurveda belongs to Hindus, Sufism belongs to Muslims, and the wisdom in the Bible belongs only to Christians is not a healthy way to bring up our children. Segregating knowledge in this manner only fans the fire of fanaticism. We need to realise that just by saying Allah, a Hindu will not get blisters in his mouth, or just by saying Ram, a Muslim will not get converted or lose his faith. Education is supposed to broaden our minds and make our hearts more compassionate heart. We should not cover up or justify past mistakes simply to appease any one community. We need to acknowledge them, learn from them and move forward. It is high time we understand that we need to globalise wisdom.

(The writer is the head of the Art of Living Foundation)

Army takes away groom on Day 1 of wedding, sends his body back 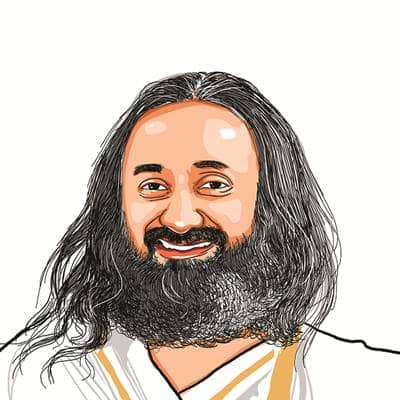