Back in Dehra Dun after an alleged sex tape forced him out of his governors seat in Andhra Pradesh,N.D. Tiwari isnt exactly down.

Back in Dehra Dun after an alleged sex tape forced him out of his governors seat in Andhra Pradesh,N.D. Tiwari isnt exactly down. The Sunday Express catches up with Tiwari at his home,surrounded by visitors and busy chalking out his future plans

He sits in the warm winter under a colourful garden umbrella like a benevolent patriarch greeting visitors. A young man walks up to him and says: My father was a homeopath in Nainital. I live in Mumbai and Ive made a film on the shepherds of the hills. The conversation then turns to bugiyals (meadows) and N.D. Tiwari pats the young man before asking him suddenly if he has a pen. The quizzical man produces one,Tiwari puts it in the mans pocket with a flourish and there are smiles all around. Next in queue is an elderly gentleman who has set up a plant of pine needles and needs some help. Then theres a woman who despite all efforts of the now understandably wary staff insists on displaying the odd assortment of gifts she has come bearing: a box of fruits,a small packet of almonds,a bottle of Bournvita and a can of Figaro olive oil for his daily massage.

Its been almost a month since Tiwari came to Dehra Dun from Hyderabad,resigning as Governor of Andhra Pradesh on health grounds after being at the centre of an alleged sex tape. Here on the lawns of his whitewashed bungalow,in the scenic Forest Research Institute,allotted to him as a former chief minister,Tiwari is keen to give the impression that well,all is well.

And while local Congress leaders fearing Delhis displeasure are going easy on visiting him,the people who he helped in his long political career are not shying away. Most of the visitors are from Kumaon,the place to which Tiwari belongs and,as many say,a region he nurtured and whose residents are now returning the favour. In fact,much of Tiwaris new confidencedefiance,almoststems from the support hes receiving from people he once helped or obliged. Just last week,he was invited to a cricket tournament in Roorkee,where many industrialists are said to have turned up to meet him.

At his home,some visitors have come to seek his help,others to express solidarity. No one mentions the Hyderabad incident except to refer to it obliquely,like a visitor who advises Tiwari to get his horoscope read again and to get a small yagna performed in Haridwar and then everything will be all right.

But Tiwari insists everything is all right. Do I look disturbed, he asks. I am sitting before you. I am good. Ive been back from Andhra now for five months, he says before hollering out to the security guard posted outside his room. How long have I been back?

Tiwari came to Dehra Dun on December 28,2009,but perhaps hes keen to put more distance and time between him and Hyderabad.

But not all his Hyderabad memories are bad. He shows a replica of the Charminar that he has brought along from Hyderabad. But the best gift I received there was this peacock, he says,pointing to a rather garish ornamental peacock. The incident in Hyderabad was a plant. An inquiry is now looking into it, he says. It was done by the Telangana lobby to frame me. The people who were asking for Telangana would keep asking me for appointments and when I didnt give them time,they did this, he says. Just look at my health,is it possible, asks the 85-year-old Tiwari.

Photographs of mine were taken and merged. Anything can be done in this technical age. These days,it is difficult for you to even go out with your mother or daughter, he says before observing that it is also difficult to watch TV with your mother or daughter and how ads made for America are being shown in India.

Then,keen to show hes no enemy of technology and modern times,he proudly shows a solar lamp and an iPod in his room. It can play 5,000 songs all night, he says.

In another corner of the room stands a crowded bookshelf where books on politics share space with the Constitution of India,Bill Clintons My Life and Alex von Tunzelmanns Indian Summer.

But before he can turn his attention to music and books,Tiwari has more contentious issues to deal with. Theres a paternity case filed against him by a 30-year-old Rohit Shekhar to which he has to file a reply by February 9. How can I agree to such a contention, he says. This is all about genes. This allegation is the creation of a disturbed mind, he adds.

There are other serious allegations too. Avdhash Kaushal,who runs Rural Litigation and Entitlement Kendra,a leading NGO in the region,plans to move court alleging that Tiwari and his aides squandered state money during the years that Tiwari was chief minister of Uttarakhand between 2002 and 2007.

Kaushal also alleges that Nav Prabhat,Tiwaris relative who was Forest and Urban Development Minister during his chief ministership,had approached him seeking personal favours for the CM in return for helping members of the Van Gujjars,a nomadic tribe that Kaushal works with. Nav Prabhat,meanwhile,says he has sued Kaushal for defamation.

There have been other critics too. One of them is popular folk singer Narendra Singh Negi whose song Nauchami Narayan showed a Tiwari-lookalike with a crown and a flute like Krishna surrounded by gopis. In another shot,the Tiwari lookalike distributes lal battis (the red beacon fitted on government cars,referring to ministerial-level posts).

I am not interested in Tiwaris personal life but I am interested in what concerns the people, says Negi. Nauchami Narayan is a small satire. In Tiwaris time,250 lal battis were distributed while there were only 70 MLAs. There was a 20 or 22-year-old girl who was given one. Tell me,what was her contribution to the state, asks Negi who resigned as district information officer in Pauria government postbefore coming out with Nauchami Narayan.

The song won Negi much popularity but also the wrath of the Tiwari camp. His chamchas would call me and threaten me. Finally,they managed to get the Censor Board to delete the song from the album, says Negi. The deleted song still sells clandestinely and after the Hyderabad incident,has found its way to YouTube.

I have no power,I can only write and sing on things that move me. In Tiwaris time,a relief fund was misused. An RTI filed by a local newspaper showed that some money from this fund had gone to beauty parlours and to shopkeepers who bought more land with that money, says Negi.

The people,says Negi,reacted by ousting the Congress from power in 2007 but he concedes that people in Uttarakhand now appear to be in a forgiving mood. In Uttarakhand,people dont really revolt. And Tiwari did many things for many people and they are ready to forgive, says Negi.

So for years,people in the state put up with his colourful waysincluding a disappearing act in the late 80s when he was later traced to a guesthouse in Gajraula. And now,they say at least he is no molester like DGP Rathore.

Though Tiwaris governance attracted a lot of criticism,for many,he remains Uttarakhands tallest leader. Born in a village in Nainital,Tiwari became a part of the freedom struggle. In 1952,he was elected from Nainital and became an MLA of the Praja Samajwadi Party. He joined the Congress in 1963 and was elected MLA from Kashipur constituency two years later.

In the following years,he went on to become Union Minister for Industry,Finance and External Affairs. Indiraji would say we have a lot of work,Tiwariji. She always called me Tiwariji. She called me Narayan Dutt only once in her life and that was when Sanjay died. His body was lying on a block of ice and she said,Narayan Dutt,just look at Sanjay, he remembers.

I was deputy chairperson of the Planning Commission,Indiraji was chairperson and Manmohan Singh was secretary. I was influenced by Swedish economist and Nobel laureate Gunnar Myrdal, he says,before launching into a sentence in Swedish. Do you follow Swedish or Danish, he asks. I learnt a bit when I was in Sweden for a year on a scholarship, he says.

And,he says,he has his father to thank for his English. My father was a High School pass in the times of the British. We had a Nesfield grammar book at home from which he used to make me learn 10 new words every day. Because of that,my spelling has always been good. Whenever people came to me with files,I would catch all the wrong spellings and wrong syntax, says Tiwari.

The three-time chief minister of Uttar Pradesh narrowly missed being Prime Minister in the early 90s,piped to the post by P.V. Narasimha Rao. He left the Congress in 1994,forming his All India Indira Congress (Tiwari) but joined the Congress again once Sonia Gandhi took over.

In 2002,he became chief minister of Uttarakhand,the hill state carved out of Uttar Pradesh only two years ago. As chief minister,he is said to have attracted big industrial houses to Uttarakhand,put the industrial policy in place,and is credited with setting up the Petroleum University and the State Infrastructure and Industrial Development Corporation of Uttarakhand Ltd (SIDCUL),which set up an IT Park and Pharma City in Dehra Dun.

But charges of misgovernance and of people having free access to him continue to dog him. Sources close to him say some of his aides exploited the vacuum in his domestic setuphis wife Sushila,a doctor in Lucknow,died over 10 years ago and he has no children.

Tiwari,though,is no mood to call it a day. Hes no longer in active politics but hes not content with being relegated to the role of a mentor. Not mentor, he says promptly,but a co-builder. I will now work towards consolidating what we have achieved. I constantly update myself. I have leapt through generations, he says. 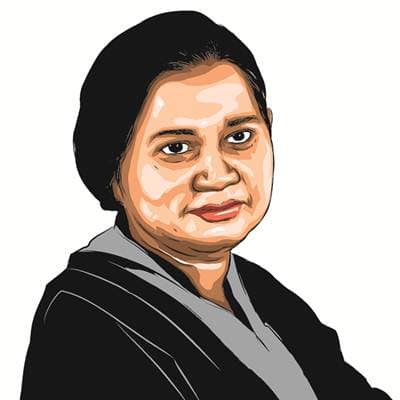