Censoring his own past

Information and Broadcasting Minister Jaipal Reddy is a product of the Jayaprakash Narayan movement. He opposed the Emergency and suffered b...

Information and Broadcasting Minister Jaipal Reddy is a product of the Jayaprakash Narayan movement. He opposed the Emergency and suffered because of it. That he should stall the screening on Doordarshan of a documentary on JP hurts more than it shocks. It is natural for a Congress-headed government to gloss over the excesses committed during the Emergency. But this is one stain the party will have to live with for a long time to come. The blemish is not going to simply fade away with the passage of time. The party has to take note of facts. The documentary, produced by an outstanding director, Prakash Jha, narrates only part of the harrowing tale. The newly appointed Censor Board has delayed its certification and Doordarshan has blocked its telecast. Still the excesses do not cease.

The real problem is within the Congress Party. The attitude of leaders belonging to Indira Gandhi’s days is different from that of those who joined the party after her death in 1984. The first lot takes things in its stride. Many Union ministers of today were part of the extra-constitutional rule at that time but their arrogance was tempered by the realisation that they had done wrong. Post-Indira Gandhi Congressmen — Jaipal Reddy is one of them — wear authority on their sleeve. Like new converts, they are intolerant and aggressive. At the same time, they bend backwards to prove their credentials. Their assertions of loyalty are understandable but their servility is not. It is apparent that Reddy wants to efface his past association with the Telugu Desam. True, the Congress gave him a Lok Sabha ticket when the Telugu Desam denied him one. But that was the party’s strategy to weaken the TDP. In any case, he should not go overboard to prove that he would rather suppress the truths of the Emergency rather than allow the Congress to face a few moments of embarrassment. If I recall correctly, Congress President Sonia Gandhi has said that the Emergency was a mistake. Why should the information minister presume that she would be annoyed if the documentary is aired? In fact, the behaviour of people like Reddy frightens me. It means that there is something basically wrong with the Congress where even top ministers are afraid of how Sonia Gandhi would react to their routine decisions.

However, Reddy’s fiat proves one thing: the devaluation of Prasar Bharati. The set-up is supposed to be autonomous, and decisions are not meant to be influenced by a telephone call from the minister. Reddy has proved that he is no different from his BJP predecessors, Arun Jaitley and Sushma Swaraj. They too had reduced Doordarshan and Akashvani to political platforms from where party propaganda was disseminated in the guise of a national programme. All that was worthwhile was blocked because it did not square with the BJP’s parochial thinking. Reddy, who founded Prasar Bharati during the prime ministership of Inder Gujral, was expected to act differently. He should have released the set-up from the shackles of government and party. But the latest indication from him is that there will be “a close liaison” — whatever it means — between the Congress and his ministry.

Another institution that is losing its autonomy is the Central Bureau of Investigation. It was misused to the maximum during the Emergency. It was recovering from the battering it got but then the BJP drenched out whatever strength it had gained. The party during its rule misused it to the hilt. It even rewarded a retiring CBI director by appointing him a member of the National Human Rights Commission for a six-year term. He had got the Babri Masjid demolition charges against the then deputy prime minister, L.K. Advani, dropped. It is another matter that a revision petition by the CBI before the Lucknow bench of the Allahabad High Court has revived the case. When the charges were withdrawn Advani headed the home ministry; and now when they have been revived, Shivraj Patil is the home minister.

But the manner in which the CBI has dropped corruption charges against former petroleum minister Satish Sharma, who is considered to be very close to Sonia Gandhi, takes the cake. The CBI’s explanation is that the home ministry has stopped it from prosecuting Sharma. The Congress can do anything because it is in power. But then the party’s leaders should not talk tall about morality and values. When it comes to politics or “important” people, the Congress throws principles to the wind as willingly as the BJP did. They are no different from each other.

The highest court in the land indicted Sharma. The Supreme Court said that “Sharma’s actions were totally arbitrary, mala fide and unconstitutional”. The apex court held that in the matter of allotment petrol pumps were treated as property within the meaning of Section 405, capable of being “misused or misappropriated”. This was such a scam that the Congress should have distanced itself from Sharma. Instead, it gave him a Rajya Sabha seat when he was defeated in the Lok Sabha elections this year. Now the corruption cases are being withdrawn, probably to facilitate his entry into the Union cabinet. What all this proves is that the person, however tainted, should be close to Sonia Gandhi.

The cases of Sharma and Advani only show that the CBI cannot be left under the government’s charge. There has to be an autonomous body to supervise it, to insulate it from political pressure. When the Central Vigilance Commission was constituted upon Supreme Court orders, that was the intent. The commission was supposed to have “superintendence” over the working of the CBI. The BJP did not allow that for political considerations. The Congress is only following its footsteps. How does the country salvage the relevance of critical institutions? This is the question people have to ask themselves. The rulers can be of no help because their value system has changed over the years. Yet, if the nation is to preserve the fundamental values of a democratic society, every citizen must display a degree of vigilance and willingness to sacrifice.

The keyboard is key 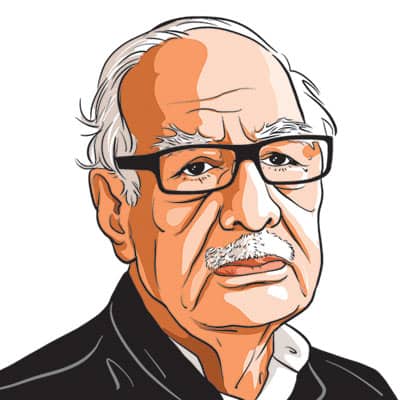