Madhya Pradesh (MP) Floor Test Highlights: Hours ahead of the Supreme Court-mandated floor test, Kamal Nath on Friday stepped down from the chief minister’s post as the government fell short of numbers in the Madhya Pradesh Assembly. “I have decided to step down from the post. However, I shall continue to work for the people here irrespective of my post,” he told reporters.

On Thursday, the bench of Justices D Y Chandrachud and Hemant Gupta directed that the test be held by show of hands, and that the rebel Congress MLAs be provided security if they wished to participate in the proceedings. It also ordered that the proceedings be videographed.

Shivraj Singh Chouhan: 'If a govt topples due to their own internal problems then we can't do anything'

Commenting on the recent developement, BJP leader and former MP CM Shivraj Singh Chouhan said was quoted by ANI as saying, "If a govt topples due to their own internal conflict then we can't do anything. You can see that we were not in the game to form or topple a govt. They (Congress) should do some self introspection that what gave rise to such situation."

What we have witnessed today in #MadhyaPradesh is a blatant killing of Democracy in broad day light. Dismantling the democratically elected govt for the lust of power has become a habit for the BJP. The Madhya Pradesh Assembly was today adjourned sine die by the Speaker.

Meanwhile, BJP leaders are holding a meeting in the national capital. 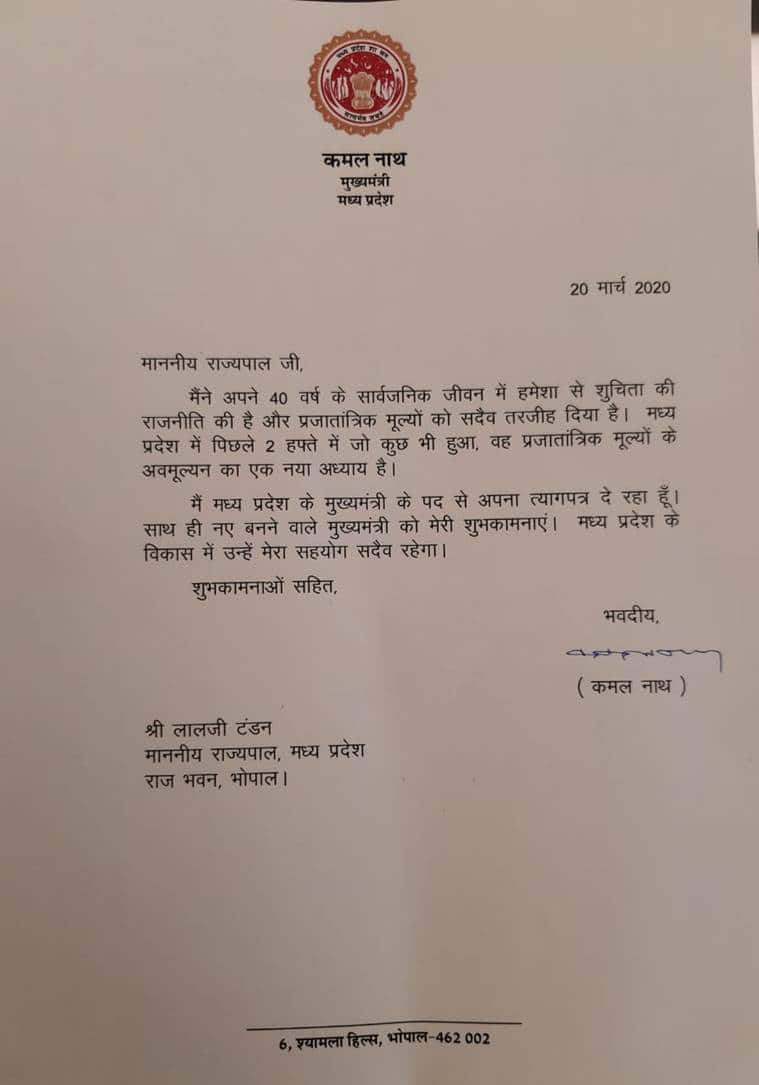 Chief Minister Kamal Nath has arrived at Raj Bhavan to submit his resignation.

Former Congress leader Jyotiraditya M Scindia, who recently joined BJP, tweeted, "The people of Madhya Pradesh has won today. I have always believed that politics should be to serve the people. However, the Congress government had seemed to deviate from its path. Truth has won today."

However, despite the Speaker's claims, BJP MLA Sharad Kol said he did submit his resignation. 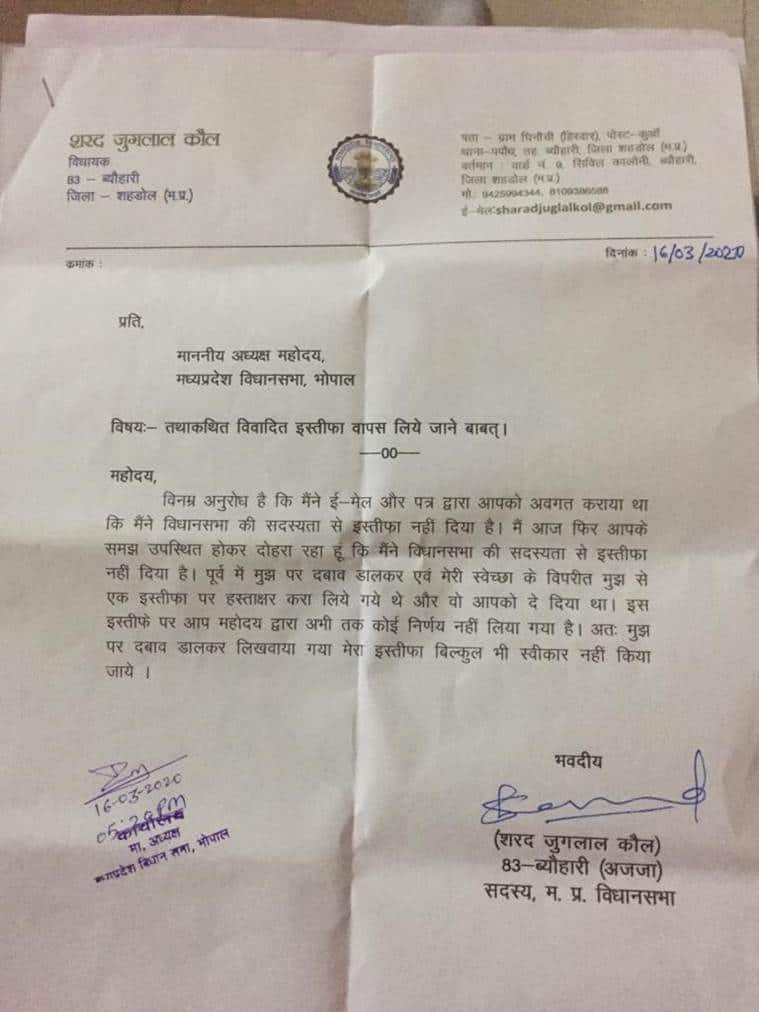 Meanwhile, Assembly Speaker N P Prajapati told reporters, "I had accepted 16 resignations last night. Now, I have also accepted the resignation of Sharad Kol (BJP MLA). He had earlier said that he was forcefully made to resign but after looking at his documents and that he didn't meet me personally, it didn't seem like that."

After resigning as CM, Kamal Nath says: 'Will continue to work for Madhya Pradesh irrespective of post'

"The BJP thinks it will win by defeating me. They cannot weaken my resolve. I have always believed in values; the BJP won't succeed. Irrespective of the post, we will continue to work for the people. I am going to resign and will meet the governor in this regard," Kamal Nath told reporters.

There have been no scam and corruption accusations against the Congress government in 15 months, Kamal Nath said. He added, "The people will give us character certificate, we don't want it from the BJP."

"We wanted to make Madhya Pradesh more attractive for investment. BJP was scared that it may not return to power again in Madhya Pradesh. They thought they win by playing politics. But they have not been able to defeat my morale," Kamal Nath told reporters.

"The BJP has always tried to destabilise the government. In the last 15 months, our government has done a lot for the farmers. The treachery is not done with me but 7.5 crore people. The BJP has betrayed the public mandate," Kamal Nath said.

"The BJP has continuously plotted against my government. Every 15 days, a BJP leader would make a remark, saying this government is here only for a few months and won't last long. They also held hostage our 22 MLAs in Karnataka. They've spent crores of rupees by luring our 22 legislators to the BJP camp. The BJP has planned this to kill democracy. The people of Madhya Pradesh will never forgive them," Kamal Nath said.

"What was my fault all this while? In my entire political career, I have always believed in development. I tried my best to give Madhya Pradesh a new direction. The people here had given me five years to create a new state. I tried giving a new identity to Madhya Pradesh This was what I wanted to achieve," Kamal Nath said.

On Thursday, following the Supreme Court ruling, the Congress issued a whip to its MLAs, directing them to be present in the House on Friday and vote in favour of the trust vote of the government.

Chief Minister Kamal Nath told a CLP meeting at his residence: “Today, the Supreme Court gave its judgment. We argued our case strongly. We also put up our arguments over the 16 captive legislators strongly. The court has given a verdict about the trust vote tomorrow. We are not disappointed. We are together.”

“The BJP has played a dirty game by holding our legislators hostage in Karnataka. They played the game to destabilise us because it was shaken by our pro-poor works. BJP was plotting from day one because it could not digest the mandate given by the people for state’s development,’’ he said.

Former Chief Minister and senior BJP leader Shivraj Singh Chouhan, who approached the Supreme Court with nine others to seek an immediate floor test, hailed the order as “defeat of injustice”.

“The government will be defeated in the floor test… We welcome the judgment, bow our heads,’’ Chouhan said. State BJP BJP president V D Sharma called it “the beginning of the end’’ of the Congress-led government.