Lok Sabha Election 2019: All seven Lok Sabha seats in Delhi will vote on May 12. PM Modi addressed a rally in Ramlila Maidan, which marks his first public address in the national capital for the elections, Gandhi held roadshows in North East and South Delhi constituencies.

While the former held a rally in Ramlila Maidan, which marks his first public address in the national capital for the elections, Gandhi held roadshows in North East and South Delhi constituencies. The prime minister, in an apparent reference to the ruling Aam Admi Party Delhi, said those who came to change the country, changed themselves instead.

Priyanka Gandhi who was seen holding roadshows alongside Sheila Dikshit and party’ South Delhi candidate Vijender Singh asked people to come out and vote against BJP’s false promises. All seven seats of the national capital go to polls on Sunday. With alliance between the Congress and Aam Aadmi Party failing to materialise, the three-way contest is being keenly watched.

Lok Sabha elections: Prime Minister Narendra Modi and Priyanka Gandhi Vadra will campaign in Delhi today which will witness a triangular contest between Congress, BJP and the Aam Aadmi Party.

Urging people to vote for BJP, PM Modi asked people to vote for the Lotus symbol on Sunday when the capital goes to polls in the sixth phase. During the rally, the prime minister turned his guns against the Kejriwal government in the national capital and also slammed Congress for its dynasty politics. Continuing his earlier attack on former prime minister Rajiv Gandhi, he alleged that warships like INS Virat was used for family vacations and asked people to reconsider whether Congress was above India.

'Naya Hindustan does not succumb to pressure. We do not provoke anyone, but if provoked, we do not spare anyone either'

PM Modi at Ramlila Maidan: "Inspite of being the election season, people are able to enjoy IPL matches, festivals like Ramzan and Holi which is reflective of the current rule. India has dealt with Cyclone Fani. What was considered impossible earlier, is now possible, thanks to will of the current government. Naya Hindustan (New India) is now able to respond by entering the homes of the terrorists'. New India now does not succumb to the pressure and does not provoke anyone, but those who provoke us are not spared anymore."

"Congress used to go on family vacations on warships like INS Virat when Rajiv Gandhi was the prime minister of the country. Using a warship as a personal cruise-ship for holidays is a compromise on national security, isn't it? No one questioned their family holiday because it was Rajiv Gandhi in question. When one family holds the political reigns of a country, this is what happens. Our entire country's administration was only involved in entertaining one family and fulfilling their wishes," says PM Modi in Delhi

'Congress is talking about Nyay today, but who is responsible for the 'Anyay' during the 1984 riots?'

PM Modi slamming the Opposition during his address in Ramlila Maidan, said, "Today, Congress is talking about 'Nyay', then tell us who is responsible for the 'Anyay' during the 1984 Anti-Sikh riots? In the past five years, we have been able to oust the 'dalals' who were provided safe haven in this country by Congress, such as Christian Michel, Quattrochhi or Anderson."

PM Modi hits out at Kejriwal, alleges AAP govt ruined the image of the 'common man'

Hitting out at Arvind Kejriwal's AAP government in Delhi, Modi says, "We believe in a five-model development in the political culture which includes— Naampanti, Vaampanti and Daampanti aur Namanpanti, Vikaaspanti. It is the 'Na-Naakampanti' of the Kejriwal government which has ruined the image of the common man and is synonymous today with anarchy. Instead of transforming the country, they ended up changing themselves."

PM Modi during his rally in Delhi says, "Initially if people had to travel to Uttar Pradesh or Haryana, they had to take the roads which led to increasing pollution and traffic jam in the capital. But after we constructed the Eastern and Western peripheral expressways, people have been eased from major traffic jam. Like River Ganga rejuvenation program, we have also begun the work to clean River Yamuna."

"GST was introduced to remove Inspector Raj. Opposition is not able to corner us on the issue of inflation due to our multiple schemes like PM Awas Yojana. We have provided toilets and gas cylinders.

Earlier, due to some corrupt people, people were not able to fulfil their needs, but we have waived off many taxes which is the reason for the Middle class being strengthened in today's times, " says PM Modi in Delhi.

"Today, if the red VIP signal has been removed from their cars and convoys, it is because of you. We have been able to remove the VIP culture, thanks to you. We have worked to change not only the 'Ease of doing business' ranking but also the 'Ease of living' indicator which is reflective of how people can now have comfort living," PM Modi said in his address in New Delhi.

Prime Minister Narendra Modi in his first public address in the national capital at Ramlila Maidan, began by apologising to the people of Delhi for causing trouble to them due to the arrangements of his rally. "I'm sorry for the inconvenience caused by my movement. It is your support which has led to the progress that the country is witnessing today," he said during his address.

The Delhi High Court Wednesday dismissed a PIL seeking to restrain Chief Minister Arvind Kejriwal and Aam Aadmi Party (AAP) from making "false" electoral promise of full statehood for Delhi in the ongoing Lok Sabha elections. The plea came up before a bench of Chief Justice Rajendra Menon and Justice A J Bhambhani which rejected it. The plea also sought direction to the Election Commission to take appropriate action against Kejriwal and AAP for breach of provision of the Representation of the People Act. The petition filed by Anil Dutt Sharma said that AAP and Kejriwal have been advertising the promise to get full statehood for Delhi despite knowing that even if they will, they cannot grant it.

Addressing a rally in Madhya Pradesh's Morena district, Rahul Gandhi claimed that Chowkidar won't become the prime minister this election season. He also alleged that it was with Modi's help that black money in the country has turned into white as Gandhi asserted that he won't hug industrialist Anil Ambani till his last breath.

Priyanka Gandhi challenges people, asks them to vote against false promises made by BJP 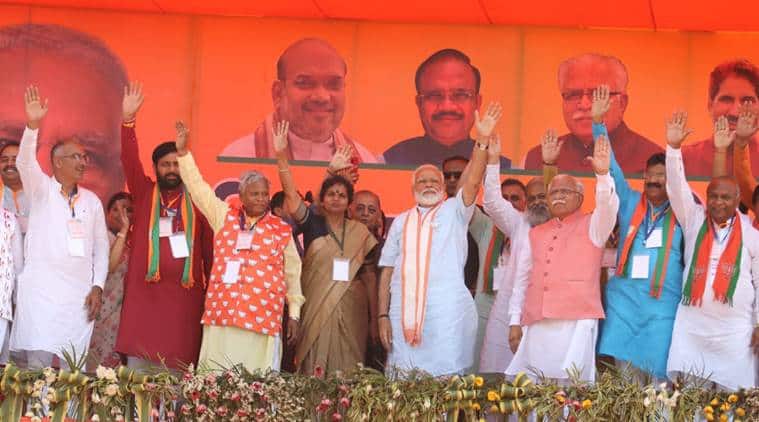 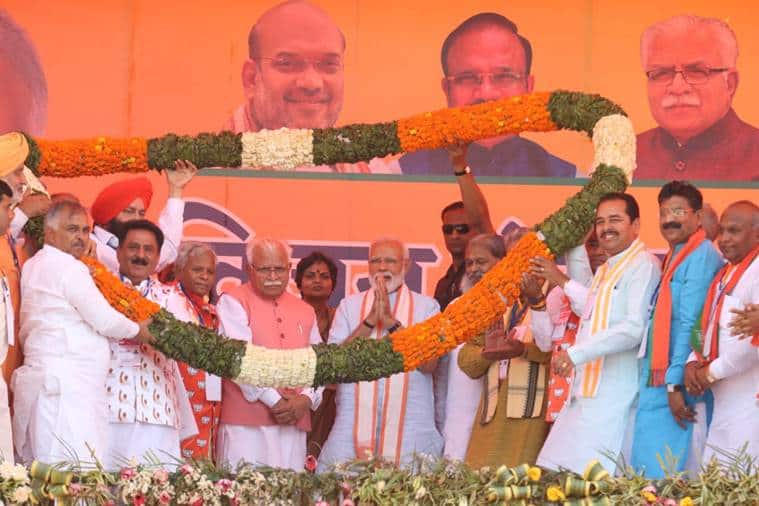 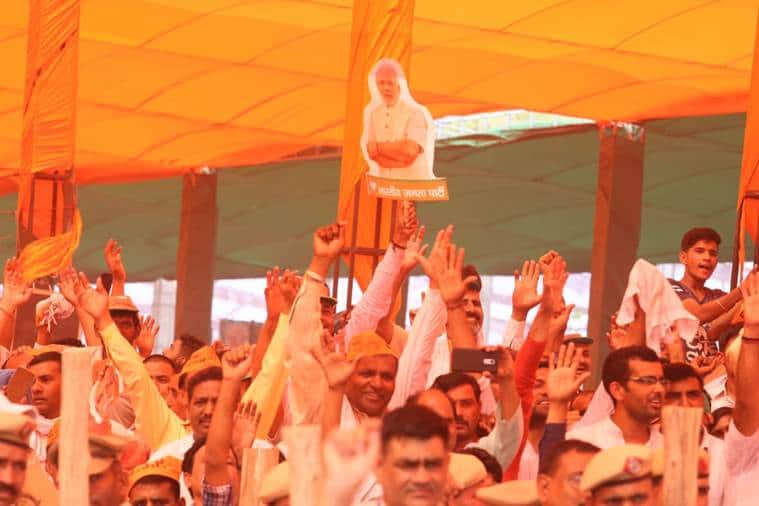 Congress' abuses me under the guise of love, says PM Modi in Kurukshetra

PM Modi in Kurukshetra: I constantly stop Congress' corruption, talk about dynastic politics which is why they abuse me under the guise of love. Congress leaders have called me names repeatedly and these are the ways they show me their "love". No one is questioning the way Congress is showing off their "dictionary of love". We can understand how many times they have breached their modesty while abusing me from their "dictionary of love"

We have busted Congress' Hindu terrorism conspiracy: PM Modi in Kurukshetra
"Congress had a waged a campaign to defame India's culture. After the Samjhauta Express blast near Panipat, Congress put innocent people behind bars for years to cover up the falsehood of Hindu terrorism. But we have busted their conspiracy. I do not let Congress and their associates to do what they wish to, " says PM Modi.
LOAD MORE

Two phases remain before elections for the 17th Lok Sabha commences. On May 12, Bihar, Jharkhand, Madhya Pradesh, Uttar Pradesh and West Bengal will go to polls along with all seats in Delhi and Haryana where campaigning is in full swing. Results will be announced on May 23.

Addressing a rally at Ambala in support of Rajya Sabha MP and party candidate Kumari Selja, Congress leader Priyanka Gandhi on Tuesday hit out at the BJP government for “forcing people to stand in lines during demonetisation”, and asked the crowd, “Did you see any rich (person) or BJP leader in queue that time?”

Priyanka, who is Congress’s eastern UP in-charge, said she had toured Uttar Pradesh but did not find a single youth who got a government job during the five-year regime of BJP. Currently, Congress represents only one seat – Rohtak – out of 10 parliamentary constituencies in Haryana and is seeking to make a comeback in the forthcoming polls.

The state will also see an alliance between the AAP and the JJP. Yesterday, the two parties held a show of strength in Hisar from where sitting MP and JJP founder Dushyant Chatuala is seeking re-election. The show of strength was led by Dushyant and Delhi Chief Minister Arvind Kejriwal.

Invoking his Haryana roots, Kejriwal appealed to people to vote for AAP-JJP candidates on all the 10 Lok Sabha seats.

Meanwhile, the BJP is on full throttle mode for campaigning by its top leadership in the state till Friday when campaigning will end. Besides Modi, BJP president Amit Shah, Uttar Pradesh Chief Minister Yogi Adityanath, Union Home Minister Rajnath Singh, and actor-turned-politician Sunny Deol will address rallies and road shows. Prime Minister Narendra Modi will also address a rally on the last day of campaigning.

In Delhi, the triangular contest between the AAP, Congress and BJP is being keenly watched. Uttar Pradesh Chief Minister Yogi Adityanath yesterday took a jibe at his Delhi counterpart Arvind Kejriwal, asking whether the AAP supremo was the head of the city administration or leader of dharnas and demonstrations.

"He is the prime minister of the country but insults a martyr. I told him whatever hatred you have for me...you can belittle me, you can say whatever you say about my father, mother, grandfather, grandmother. Whatever hatred you direct against me, I will only return it with love," he said.