These transgender beauticians are fighting stereotypes, one makeover at a time

Ramjas College’s social entrepreneurship society, Enactus, has been working closely with members of the transgender community, who like Alina, are looking for their big break in the beauty industry. 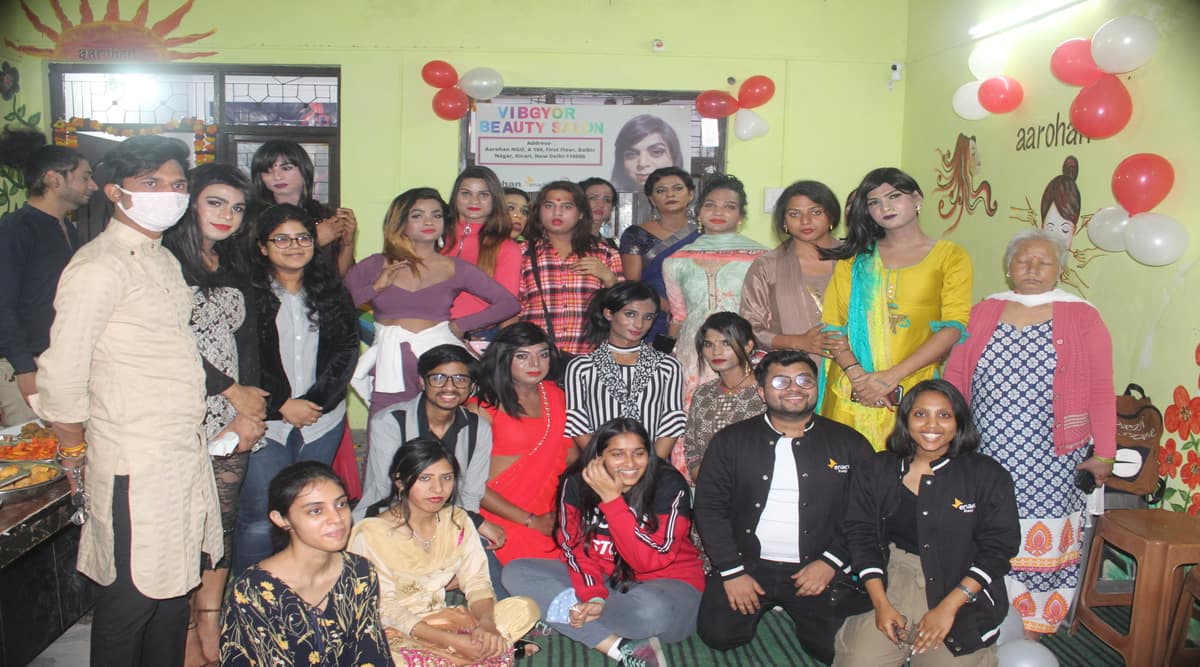 Alina Sahai made her foray into the world of professional makeup in 2013. But her love for cosmetics and beauty started much earlier. For Alina, makeup is nothing short of an art form — a natural progression from painting, which she always had a penchant for. Today, she is the lead salonist at VIBGYOR beauty parlour in New Delhi’s Kirari village, one out of a chain of four salons founded by students of Delhi University’s Ramjas College and run entirely by members of the transgender community.

“Our focus is to ensure that trans people who come to our parlour are treated without bias and made to feel completely welcome,” says the 30-year-old, who is also a Project Manager at Delhi-based Aarohan NGO. The salon, set up inside the charity’s office in Northwest Delhi, offers an extensive range of services — from manicures and pedicures, to hair spas and facials. Since the parlour was inaugurated in February this year, Alina and her team of three beauticians have been able to serve around 200 customers every month.

Ramjas College’s social entrepreneurship society, Enactus, has been working closely with members of the transgender community, who like Alina, are looking for their big break in the beauty industry. As part of its flagship programme, ‘Project TransCreations’, Enactus Ramjas has collaborated with organisations like Godrej, KPMG and Hindustan Latex Family Planning Promotion Trust (HLFPPT) to train trans people in beauty, hair and makeup. So far, the student-run society has been able to set up four VIBGYOR salons in Noida, Janakpuri and Peeragarhi.

“We knew we wanted to work with the queer community and create employment opportunities for trans people in particular,” Project TransCreations head Kshitiz Aggarwal, 19, tells indianexpress.com. “At Enactus, our objective is not just to create temporary happiness for our beneficiaries. We want to ensure that they will be able to support themselves long term.”

But why the beauty parlour business? After speaking with trans people across Delhi, the Enactus Ramjas team found that a majority were interested in working in beauty and personal healthcare, Kshitiz, a second-year Economics Honours student, says.

Project TransCreations collaborated with Godrej in 2018 and was able to launch training programmes for members of the trans community. But their next challenge was finding affordable spaces to set up salons. To save money on rent and electricity, the team reached out to NGOs in the National Capital that worked with India’s LGBTQI+ population and asked if they had rooms they could spare for the cause.

“We started our first salon at the office of Basera NGO in Noida in 2019,” Kshitiz recalls. “This was followed by our parlour in the Shape India office, which we set up in 2020.  Soon after, came our salon in the Mitra Trust office in Janakpuri, which was set up just a month or two before the pandemic. Now we have added Aarohan to the list.”

For members of the LGBTQI+ community, finding a beauty parlour where they are treated with respect and without judgement is rare, says Alina. “We had a problem initially as members of the community were scared that their privacy would not be respected. With time we were able to show them that this is a safe space for them to come to,” she explains. Alina, who runs a Facebook page where she uploads photographs of some of her clients and their makeup looks, makes it a point to ask for permission before sharing their images.

But Alina’s regular clientele is not limited to the LGBTQI+ community. In fact, when they first started opening salons, the Enactus Ramjas team contacted people who lived in the neighbourhood. They ran a door-to-door campaign, reaching out to locals living in the areas surrounding their salons.

“We got very mixed responses. Some people were really happy to hear that a group of college kids were taking on such an ambitious project. But there were also people who were reluctant,” Kshitiz says. “Some people would hear the name of the parlour and shut the door, but that didn’t happen as much. People weren’t wholeheartedly accepting, but mostly they were okay.”

Instead of focussing on the parlour’s entirely transgender staff, the Enactus team pitched it to potential local customers in terms of the low pricing of salon services. “Initially, to pull in customers, we would charge less than what the market price was,” Kshitiz explains. “Since the quality of training was high, the services being provided were very good. Eventually through word of mouth our customer base started growing.”

But it wasn’t always a smooth ride for VIBGYOR’s team of transgender beauticians. “Though our service was good, there were still some people who weren’t completely on board with the fact that we were transgender,” Alina said. “Some people hoped that we wouldn’t touch them. We slowly had to explain to them that this is a place of work and we were all professionals. Eventually, they came around.”

The team faced yet another hurdle last year, when a nationwide lockdown was announced in response to a rising number of coronavirus cases in India. They were forced to shut down all three of their parlours, and delay the inauguration of their salon at Aarohan NGO indefinitely.

Now, over a year later, Project TransCreations is starting to find its feet once again and Enactus Ramjas has big plans for the future. “Apart from expanding our existing services, we are also looking at setting up VIBGYOR salons across the country. We also plan to approach the Delhi government for support soon,” Kshitiz says.