Book review: In The Children Act, the protagonist is thwarted by reality

In Ian Mc Ewan’s new novel, the protagonist is thwarted by reality and the limits of morality.

A reader afloat on the pages of a novel is also invited to judge: right from wrong, the noble from the merely good, the manipulative from the canny, even if those choices eventually end up in a grey zone of uncertainty. In an Ian McEwan novel, specially, that judgment is always going to trip on a tiny pebble of doubt, the queasy knowledge that a “malevolent intervention” is never too far. In The Children Act, the reader slides into the clear, perspicacious pool of Fiona Maye’s mind. A 59-year-old judge in the Family Division, where parents were ranged in vicious combat with the one they once loved, and “which teemed with strange differences, special pleading, intimate half-truths, exotic accusation”, Fiona is a wise woman.

A lifetime’s “entanglement in human weakness” has given her the ability to parse the strands of love, hate and faith that bind people. The language of her judgements are legendary for their “godly distance, devilish understanding.” While deciding which of a pair of conjoined twins deserved a chance to life and whether a father from an ultra-orthodox Jewish community had the right to pull his daughters out of school and their mother’s custody because a secular life is against his beliefs, she holds modernity and tradition, the individual and the collective in a fine balance of justice. “She believed she bought reasonableness to hopeless situations.” Like McEwan the author, she aspires towards the exactitude of language and form.

But like a stone cast into still waters, comes her academic husband Jack’s wish: he confesses that he wants to experience the raw ecstasy of a sexual dalliance with a young woman one last time, his riposte to the withering of age. In anger and hurt, she asks him to leave. Her marriage in danger, the disappointments of the past eddy up into her mind: her childlessness, her lack of recklessness, the slight ridiculousness of her ageing body. She is in that fraught state, when a hospital knocks on her door. Adam, a young leukemia patient, a few months short of 18, had refused blood transfusion because it was against the beliefs of Jehovah’s Witnesses — even if it means facing death.

The domains of religion and personal life/individual welfare often square off in this novel, and that is in tune with McEwan’s stance as a public intellectual, which has often questioned the blinding power of religion. But as a judge, Fiona is clear she cannnot reflexively pitch for the latter. She travels to Adam’s hospital to meet him, an encounter which leaves her immeasurably moved. Eventually, she rules against the young boy’s wishes: because his welfare is served by “the life and love that lie ahead of him”. If that seemed like a pat resolution, Fiona’s trial has just begun — and it will take her away from the certainties of her moral sense and onto the tragedy that lies coiled in the tail of a McEwan novel.

In an interview with Zadie Smith in 2005, McEwan had remarked “that there’s something very entwined about imagination and morals. That one of the great values of fiction was exactly this process of being able to enter other people’s minds.” The triumph of this novel is its deeply moral protagonist thwarted by the reality and limits of justice. This is a spare, compact novel, taut as a thriller in its rising suspense, which mulls again and again the question: what is justice? Through its ruminations on age and mortality, it takes on the mellow shades of autumn. Like The Child in Time, Mc Ewan’s 1987 novel, where a couple torn by the loss of a child moves gradually to a rapprochement, at the end of the novel, Jack and Fiona are face to face with their transgressions, and the possibility of, if not renewal, repair. 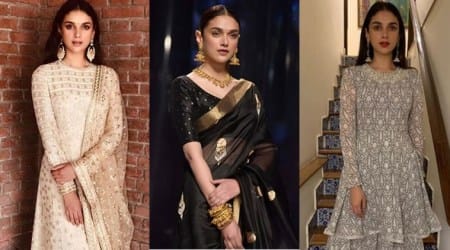 Aditi Rao Hydari is a sight to behold in ethnic wear; see pics