The store — currently the only one selling liquor in Qatar — operates on an appointment system, harkening back to the strict coronavirus regulations that governed this country prior to just before the World Cup. The last-minute decision to ban the sale of beer at World Cup stadiums in Qatar is the latest example of some the tensions that have played out ahead of the tournament. (AP Photo/Petr Josek)
Listen to this article
World Cup fans find booze at hotels, Qatar’s 1 liquor store
x
00:00
1x 1.5x 1.8x

In a dusty neighborhood on the outskirts of Qatar’s capital, guards stand duty at a gated compound ringed with razor wire, carefully checking passports and permits before allowing anyone inside. But this isn’t a prison or a high-security area associated with the ongoing World Cup.

Rigid limits on alcohol are a fact of life in this conservative Muslim nation on the Arabian Peninsula, which follows the same strict Wahhabi interpretation of Islam as its neighbor Saudi Arabia. Soccer fans coming to Qatar for the World Cup got a taste of that just before the tournament as authorities cancelled beer sales at stadiums.

Yet corks continue to be popped in luxury boxes at games. Fans are filling pints from beer towers at dozens of hotel bars, lounges and nightclubs with liquor licenses. Sales of $14 Budweisers at Doha’s FIFA Fan Zone continue unabated.

“Not to say that you need alcohol to fuel your life, but it’s a good time,” said Ed Ball, an American who created an online map for imbibers in Doha to find bars. “The idea being passed around that you can’t drink in Qatar is wrong. There are places.”

In addition to the bars, there’s the liquor store where non-Muslim residents and visitors can shop after applying for a government-issued license. Located next to an Indian school in Doha’s dusty Abu Hamour neighborhood, it is run by the Qatar Distribution Co., a state-owned enterprise under the umbrella of Qatar Airways, which holds exclusive rights to distribute alcohol and pork in the country. A Japanese supporter wears a beer mug on her head on the tribune before the World Cup round of 16 soccer match between Japan and Croatia. (AP Photo/Frank Augstein)

The store — currently the only one selling liquor in Qatar — operates on an appointment system, harkening back to the strict coronavirus regulations that governed this country prior to just before the World Cup.

On a recent visit, guards twice checked an Associated Press reporter’s identifications and appointments. Razor wire tops the compound’s high walls, which bar the public from a peek inside. Signs warn that any abuse aimed at the guards can result in an alcohol license being revoked. Empty silver-colored beer kegs are piled up in the parking lot.

At the end of a chlorine-scented walkway, customers reach the entrance to the store. Inside, the shelves and stands are stocked with bottles of wine largely running from $12.50 up to $45. A liter of Absolut vodka goes for $42, while a liter of Jack Daniels whiskey sets a shopper back $70. A 24-pack of standard Budweiser cans costs nearly $52.

A small section of the store offers frozen pork pepperoni pizzas, slabs of bacon, Spam and cans of pork and beans.

Customers filled their carts or carried bottles and cans in their hands, checking against shopping lists or texting family members to double check what was needed. Several wore FIFA passes for the tournament around their necks.

Outside the shop, a 31-year-old British woman who works as a school teacher in Qatar, filled the trunk of her car. She declined to offer her name, given the connotations drinking can carry in Qatari society, but dismissed criticism surrounding drinking and the tournament.

“It’s really not that big of a deal,” she said of the licensing system in Qatar. “It’s like going to the supermarket — for alcohol.”

She added that she thought the restrictions on sales for the matches also made sense. “I’m British. I know what it’s like to to be around drunk people all the time.”

Across the wider Persian Gulf, alcohol remains banned in Iran, Kuwait, Saudi Arabia and the sheikhdom of Sharjah in the United Arab Emirates. Drinking alcohol is considered haram, or forbidden, in Islam. Imams point to a verse in the Quran calling wine “the work of Satan.” 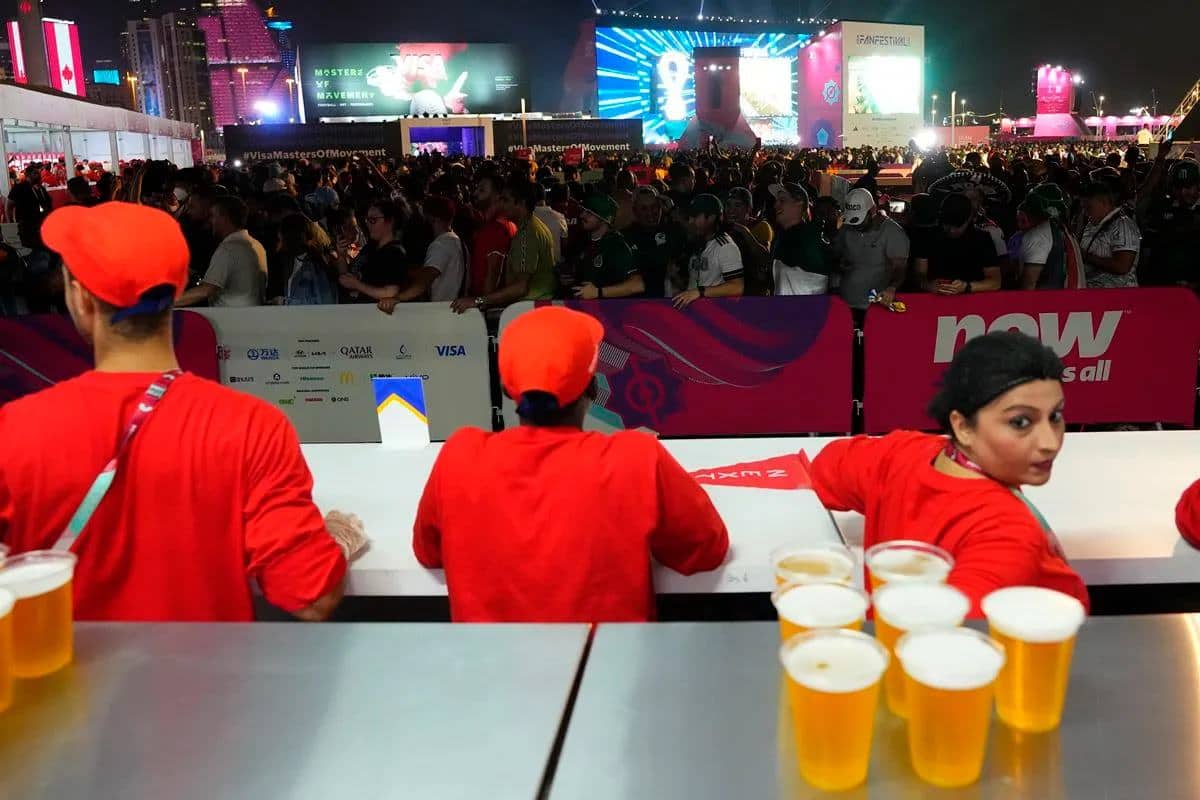 Fans wait in line for beer at a fan zone ahead of the FIFA World Cup, in Doha, Qatar.(AP Photo/Petr Josek, File)

But the region as a whole has a long history with alcohol, itself an Arabic word. The 8th century poet Abu Nawas even was known for his “khamriyyat,” or “wine poems.”

Both alcohol and pork face a 100% import duty. Qatar says it uses the tax revenue to improve health care, infrastructure, education and other public services.

Visitors are not allowed to bring alcohol into the country. Many hotels are dry and prohibit guests from bringing alcohol to their rooms.

Even with those restrictions, Qatar sold 23.2 million liters of alcoholic drinks in 2021, according to data from Euromonitor International. Though dwarfed by the United Arab Emirates’ 115 million liters sold in the same period, Qatar’s numbers show a 14.6% growth as the pandemic waned.

Meanwhile, Ball’s online map of bars in Qatar has been viewed over 875,000 times. An accompanying Twitter account shows him downing two pints of beer in 10 seconds.

“For me, drinking is just like eating. It just goes along with the culture,” Ball told the AP after returning home to Seattle, where he works for Boeing Co. “I know it’s not part of Qatar … but it’s also part of the World Cup. One of the biggest sponsors is Budweiser so it just goes to show you it kind of goes hand in hand.”

Bars in Qatar typically scan IDs of those heading in, with many working on a voucher system during the tournament to make sure fans spend at least certain amount.

On Saturday night, a group of Russians screamed expletives at the U.S. team during its match with the Netherlands as they downed shots and posed for photographs with servers at Doha’s Irish Harp.

Dermot O’Callaghan, a 66-year-old soccer fan from Dublin, Ireland, enjoyed a much calmer pint at the bar, swaying along to the Cuban band Chicas Melao.

“It’s very enjoyable, you can get a drink here if you want in the evenings,” O’Callaghan said. “You do have a cohort of fans roaming around, looking for a drink.”

Taarak Mehta Ka Ooltah Chashmah’s Raj Anadkat aka Tapu quits the show: ‘Some of the best years of my career’