Scent of a City 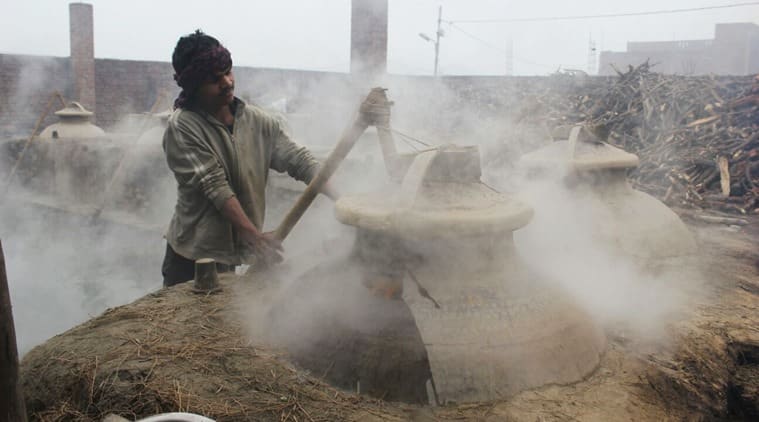 Smells like love: Attar being made in the traditional way in the city. (Photo: Faisal Fareed)

When you enter the Bada Bazaar in Kannauj, a multitude of fragrances waft in the air. They come from the dozens of perfume shops that line the market. Shopkeepers emerge from their stores, welcoming you with a dab of perfume on your wrists, reminding you that the fragrance is exactly as it used to be in the Mughal era.

For the residents of Kannauj in Uttar Pradesh, a city situated nearly 125 km from Lucknow, attar is an integral part of their lives. Attar, derived from the Persian word “atr” means fragrance and Kannauj, once the capital of King Harshavardhana, has long been known as India’s attar city. “We have the ability to extract fragrance from the soil,” says Asim Afaq, a perfume trader. It is exactly this talent that UP chief minister Akhilesh Yadav is banking on as he spearheads initiatives to establish Kannauj attar as an international brand.

On March 15, on the fourth anniversary of his government, Yadav launched four perfumes under the Samajwadi Sugandh brand that has been developed in Kannauj. The perfumes present the “aroma” of four cities — Varanasi, Lucknow, Agra and Kannauj. “It took us two years to explore and develop the aroma particular to each city. Once you wear it, you will have the essence of the city on you, quite literally,” says Pushpraj Jain, a leading perfume manufacturer in Kannauj, who has now been elected as an MLC from the Samajwadi Party. However, these four perfumes are not for sale and are to be presented as exclusive gift sets to guests of the “Itr-wale chief minister”, as Yadav has come to be referred to fondly among those who know of his interest in reviving the industry. “Five thousand boxes of these perfumes have been ordered by the state government,” says Puneet Jain, who developed these fragrances and recently presented them to Yadav in Lucknow.

Unlike synthetic perfumes, attars are meant to be applied directly on the body and last much longer. Kannauj residents believe that the fragrance of their attar lingers in a gathering even if there’s only one guest wearing it. Though no official account of how perfume originated in Kannauj is available, some believe that it came to India at the time of the Mughals. Others say it came from the practice of the ascetics who burnt certain roots and plants during bonfires. The pleasant smell lingered long after the fire had died down, and enthusiastic residents experimented with plants till they could replicate the right notes. Pushpraj, however, says Kannauj learnt the art of making perfumes during the time of Mughal emperor Jahangir. “His wife, Noor Jehan, used to bathe in water perfumed with rose petals. Soon, some people started extracting scented oil from rose petals and developed it into an art,” Jain says. Noor Jehan and her mother used to personally pick new fragrances developed in Kannauj and Jahangir patronised the industry because of their soul-soothing and innovative perfumes.

The surprising part is that Kannauj still follows the century-old method of extracting perfume. It involves boiling flowers in a copper vessel and later, condensing the vapours with cold water. Hundreds of such units function in Kannauj from which at least 150 units are operating on a decent scale. “The method is traditional and no technological interventions have replaced it. Petals are still boiled in copper vessels over a wood fire. Some tried using a gas stove for it, but it did not click,” says Afaq, whose family has worked in the perfume industry for two generations.

Though there is a plethora of attars on offer in markets, Kannauj produces only six types of perfumes. The list includes rose, bela, mogra, mehndi, hina shamama and mitti. “The soil of Kannauj itself evokes a fragrance and we extract it to make our attars. For the shamama hina perfume, at least 50 herbs are mixed which are not available in Kannauj,” Pushpraj said. New perfumes are developed by mixing these basic aromas. “While we stick to traditional practices in Kannauj, we do use the latest technology in other states. I have factories in Tamil Nadu, Andhra Pradesh, Odisha, Gujarat, Mumbai and Silvasa and we use the latest machines procured from Europe and USA. But in Kannauj, old is gold,” says Pushpraj, who owns Pragati Aroma Oil Distillery Private Limited. The traders are always looking for flowers which are fresh and have a high oil content. The best rose is procured from Aligarh-Hathras-Etah belt, nearly 150 km from Kannauj. Some local farmers also cultivate flowers that are used by small players.

It may appear to be a flourishing trade but the lack of innovation is one of the reasons that synthetic perfumes are leap-frogging ahead of this indigenous industry. “If the cost of one small bottle of natural perfume comes at Rs 100, the synthetic perfume is available at just Rs 20. It has better aroma and more shelf life. People can hardly differentiate, so the natural perfume ends up being the loser,” says Afaq. Synthetic perfumes have taken over the beauty industry as well as small industries such as those making incense sticks. “There are other problems too. Land holdings are shrinking and flower cultivation is dwindling. Hardly any new family now steps into perfume trade,” says a small trader. Still, nearly 1,500 people are directly involved in the manufacturing units in the city now.

Kannauj manufactures nearly 8,000-10,000 barrels of perfume, depending on the flowering season. Each barrel accounts for 200 litres of attar. Kannauj perfumes are found in nearly all the states of the country but the trading is done only by a few well-off perfume traders in the city. While the major destinations for export include Middle-eastern countries, Europe and the US, there is no well-defined data to assess market turnovers. “We export to nearly 50 countries and all over India. The market is loosely organised and we do not get any idea about the total turnover,” Jain says. Big players like him have opened offices in major cities such as Mumbai to attract customers. In the domestic market, the majority of the sales are conducted by pan masala companies who use Kannauj attar in their products.

The chief minister’s intervention, therefore, comes at a crucial time. This is not the first time Yadav has shown interest in Kannauj’s perfume industry. Last year, along with his wife Dimple, who represents Kannauj in the Lok Sabha, Yadav led a delegation, comprising government officials and a few Kannauj traders, to Grasse in France, regarded as the perfume capital of the world. There, they signed a deal which allows 10-15 practitioners of the city’s perfume trade to go to Grasse for training in the perfume industry.

In addition, Yadav also plans to develop an aroma park and museum in Kannauj that will focus on showcasing the industry in its best light. Officials claim that a bhoomi pujan of the park is on the cards on April 8. “We are excited about the aroma park in Kannauj. We are hopeful that it will draw in multinational companies who utilise attar in their perfumes, cosmetics and other products that need it. We will also set up our own units in the same park,” Jain says.

Out of the Valley: A look at the lives of Kashmiri students