Joshi, who underwent a sex reassignment surgery in 2013 and started her modelling career eventually, shares her journey with indianexpress.com Dressed in an embellished lehenga choli, India’s Naaz Joshi recently created history by becoming the first transgender to win the Miss World Diversity title for the third consecutive year. The win also makes her the first transgender person to win an international crown against cis-gendered women. Joshi, who underwent a sex reassignment surgery in 2013 and started her modelling career eventually, shares his journey with indianexpress.com

Can you tell us a little about yourself?

My childhood was a nightmare, and my journey thus far has been nothing less than a roller-coaster ride of emotions, hard work and enthusiasm –not just to live but also serve as an example for the world. From child abuse to being a prostitute; from being in the dust to under the limelight — I have seen it all. Today I have achieved everything without any support from my family, government or non-government bodies. India is a trans-phobic country; it has forgotten about the mention of the third gender in Ramayana, Mahabharata, Mughal era, Khajuraho temples, and we are treated as a nobody by our government. The government bodies need to be told about the untold stories of pain and trauma that we all go through since the day we are born until we die. And it’s not only us, but our families are also shamed by society for being associated with us.

You have won Miss World Diversity for the third time this year — how does it feel?

I feel very proud. With the title comes the responsibility and power to voice the opinion on the ills plaguing the world. I wish to work for trans empowerment, children with HIV and AIDS and also against domestic violence over the next one year. 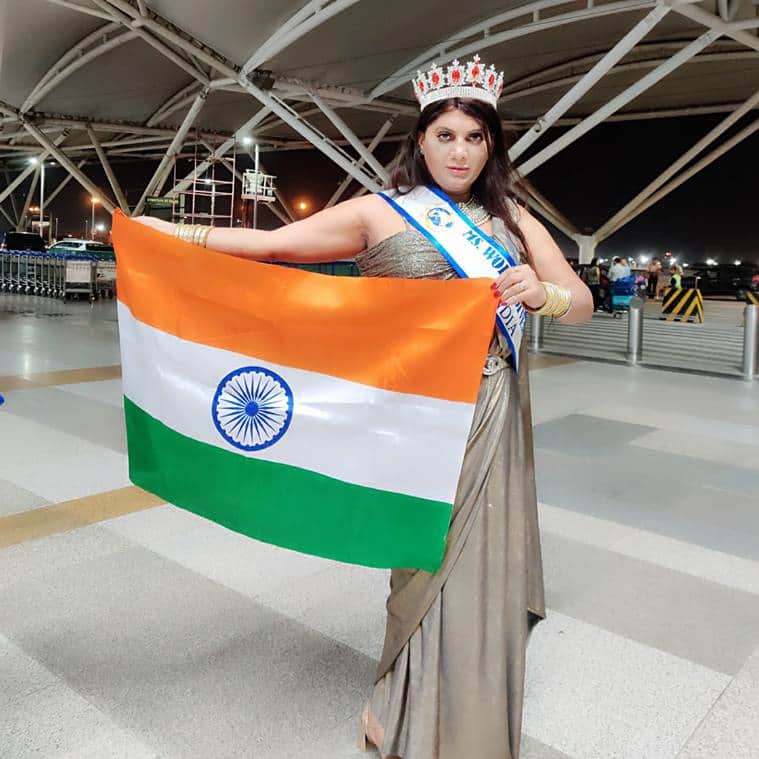 Naaz says that she believes in the power of karma.

How did you prepare for the pageant?

For the past one year I have been working on my project on gender equality, as part of which I visit colleges, universities and various societies to sensitise them about the third gender. I also work on my skin, body, diet, fitness and health. And I have experts who have been kind enough to sponsor me and my requirements to participate in the pageant.

At the pageant this year, you won Miss Congeniality and also the Best Costume. Could you describe the costume?

Miss Congeniality, which is awarded to the most cordial contestant, is an award I have always won in every competition. The award for the national costume, for which I wore a lehenga-choli, was styled by me. The velvet ensemble, which was deep blue in colour symbolised loyalty, and the ancient dabka and hand embroidery technique used on it was an ode to our craftsmen. I wore a mukut and styled it to represent the Indian goddess. To add to the charm, golden peacock feathers were added to the crown, while the red bindi was representative of even Indian woman’s power. The idea was to show the world that Indian women are no less, we are Goddess of love but when it comes to defending ourselves we can also be Shakti. How much, according to you, have things changed for India’s LGBTQ community?

After the abolition of Section 377, I see a change in society for lesbian, gays and bisexual people. Yes, it is not yet legal, but I see marriages between people of the community. But as far as trans development is concerned, it’s gone from bad to worse, and the recent Transgenders Bill talking about the welfare of the community is a mockery of trans people in our nation with the district magistrate taking a decision on our gender. Our government is orthodox, and I really don’t see any progress happening. I demand the presence of trans people in the committee, both trans man and trans woman.

What are your future plans?

I will be working on fundraising campaign for children with HIV and AIDS. I also plan to work towards changing the stereotypical mindset of the people of our country who associate trans women with colourful saris, loud make-up and a big bindi. I am a single mother and I am bringing up my eight-month-old girl with a lot of dignity. My parents are helping me raise her. What was the most challenging part from participating in Miss World Diversity?

No matter what, it’s not easy for transwomen to compete with cisgender women, as co-contestants get uncomfortable and befriending them is a challenge. I always believe that one should treat others the way you wish to be treated.

One piece of advice you’d like to give to people.

You have participated in the pageant thrice — how different was the experience every time?

Each year the contestants are different, the host country is different. Every year the contest has been more difficult than the past one and to convince the jury members about my work is the toughest job. I really wish to seek the help of my country and its citizens to help me achieve a better India.

Rajnath on ‘no first use’ nuclear policy: ‘What happens in future depends on circumstances’