‘We are not very good at keeping in sync with trends musically…we try emotionally’: Michael Learns to Rock

"We gave up on trying to follow the new trends. We don't depend on new machines, we'll just play...like classic pop songs," the Scandinavian pop band said 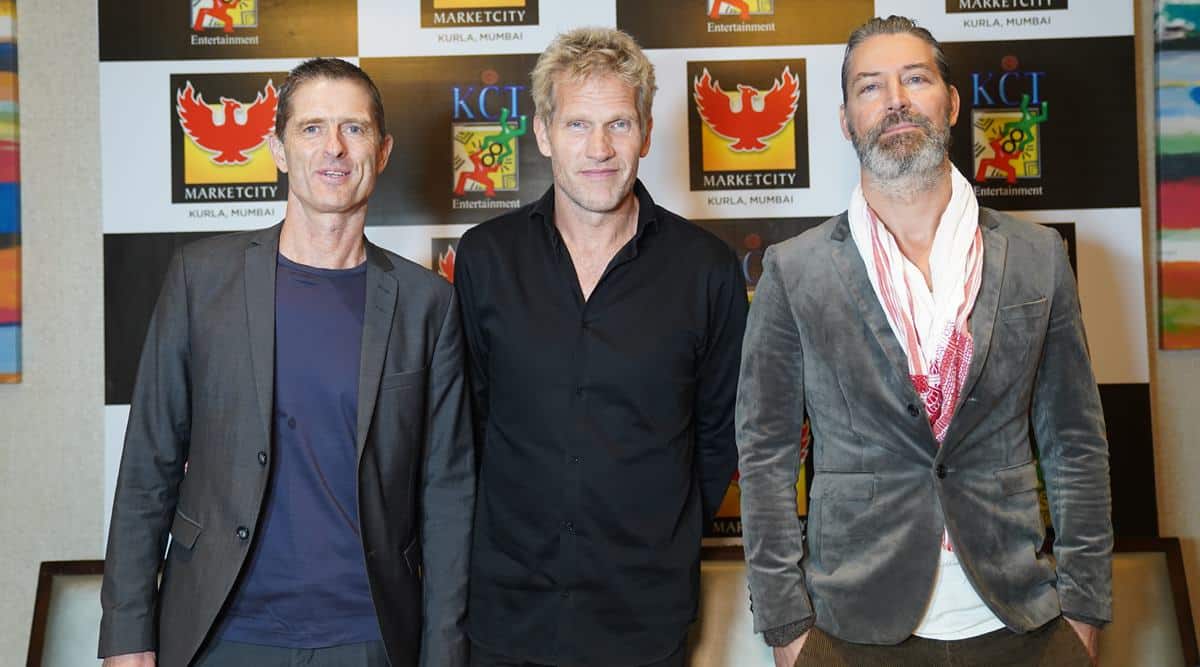 Jascha Richter, Mikkel Lentz, and Kåre Wanscher of MLTR recently performed in Mumbai as part of their 'Back on the Road' worldwide tour. (Photo: PR handout)
Listen to this article
‘We are not very good at keeping in sync with trends musically…we try emotionally’: Michael Learns to Rock
x
00:00
1x 1.5x 1.8x

Since their eponymous debut album (1991), Michael Learns to Rock has released many chart-topping numbers. Some of the most famous songs by the pop band from Scandinavia — that comprises Jascha Richter: lead vocalist and keyboardist; Kåre Wanscher: drummer; Mikkel Lentz: lead guitarist — include Paint My Love, Someday, That’s Why You Go Away, That’s Why, and Take Me To Your Heart. Currently in India as part of their Back on the Road worldwide tour, the trio performed at Dublin Square at Phoenix Marketcity, Kurla, and enthralled fans with their electrifying performance.

Ahead of their performance, we caught up with the musicians to talk about their journey, their career graphs, performing in India, their music, and much more. Edited excerpts below:

From 1988 to 2022, MLTR has come a long way. How would you describe your journey of all these years? What have your biggest learnings been, musically and personally, as a band and how have you evolved?

Mikkel: It’s been really fantastic and mind-opening for us because we were almost kids when we started — at the beginning of our 20s. We had never travelled around the world, so actually, we thought Denmark was the centre of the world, and that we were at that centre. But traveling and seeing the world all these years has changed that. Also, I think it’s matured us as human beings. So we’re very grateful for that and for the fans who have made it possible. We all love music, and that’s really why we even started out in this business. Musically, I think what means most to us, is being true to what we stand for. I think that’s why we have been able to stay relevant for so many years.

Tell us about your ‘Back on the Road Tour 2022’, as part of which you have been performing across India. How was it performing in the northeast, and now in Mumbai? You have previously performed in India, how has the experience been?

Jascha: It’s also been a while since we were here last time, too long a time ago; I don’t even remember… I think 2010.

Kåre: It is a great pleasure to be back in Mumbai, and in India. As you can imagine, it is more than wonderful for us to be back on the road after three years without traveling outside of Denmark. So, we have been very excited about this tour. We have missed our fans and missed playing music. So far, we’ve been to Indonesia, Malaysia, Singapore, and the Philippines before we came to India. We just did three shows in the North East of India, and they have really exceeded all our expectations. We’ve had some fantastic shows in the cities of Manipur and Mizoram. So right now, we’re just over-excited about being back here, and can’t wait to play around the bigger cities here in the south and western parts of India. So it’s going to be fantastic.

ALSO READ |Raghu Dixit on online concerts: ‘It is definitely not satisfying for an artiste to perform in front of cameras and laptops’

How do you feel your music has evolved over time? In a similar vein, how important is it to keep reinventing to be in sync with the changing times, audiences, and taste?

Jascha: I think it’s very important that we don’t develop!

Mikkel: Honestly, I think we are not very good at keeping in sync with trends musically… we try emotionally. About 25 years ago, we gave up on trying to follow the new trends. So, we basically just play the songs that Jascha writes as honestly as possible. We don’t depend on new machines, we’ll just play them…like classic pop songs.

At a time when social media stars and independent musicians are ruling the charts, how do you ensure to keep yourself relevant?

Kåre: We try to be there and have a presence online of course, because it’s a great way for us in Denmark to connect with fans in Asia and all around the world. So, we try our best to be there and to interact with people and stuff like that. But you know, it’s a very different world for us… our children think we’re very embarrassing when we are online. However, we have fun doing it; and, of course, we try to just sort of go out do our best.

But the secret is what you just said — that the music is so relevant. That’s the answer because if our music didn’t matter to people, we wouldn’t be here. The songs that we’ve picked for this tour are songs that we think people might know and also a few that we think people should know, and so we put it on our set-list. So, it’s always gonna be about music and reconnecting with our audience here.

Jascha: It’s a little bit boring to follow us on social media because we don’t post our breakfast and stuff. People think we are very boring!

ALSO READ |‘As a music industry, we’ve not really invested in creating the next Michael Jackson, Beyoncé, or Coldplay’: Agnee

What was your experience of the pandemic?

Jascha: The pandemic was a very quiet period of time; we spent time differently. Me.. as a songwriter, I wrote and released some songs in Danish actually, just that was something I wanted to try and the time through the pandemic was good for that.

Mikkel: We didn’t play many concerts, we didn’t tour much. We just did one or two online concerts.

Kåre: We tried to forget it (the pandemic); it was not so good. This is what we do, we love to play music and connect with fans, and are very, very happy to be back on the road.

What is in store for MLTR in the coming year?

Kåre: We will spend the Christmas holidays with family and then next year we will be touring some more.

Advertisement
ALSO READ |‘One should never butcher a song to the extent that its sanctity is destroyed’: Hariharan

Your advice to artistes of today.

Kåre: I think we were quite lucky in that sense, especially when we started. That’s because in just three months of starting the band, we got a manager, and after another six months, we had a record deal. And then another single was a big hit, it went so fast you know. That was a very lucky start for our careers. But before that, we struggled for a few years. We almost got fired by the record company when we were recording our first album — so we’ve also been through a lot of difficult times. However, once our careers got started, it really just took off. But, it’s a very different world today. You have all the digital stuff and you don’t have to send demo tapes to record labels. But my one good advice would be to make good music and be very, very lucky.

Mikkel: When we started, we had two years of struggle… and we played a lot of concerts for two or three people…nobody showed up when we played because we were not known. But, we still played. So, it takes a lot of work. And it’s like being a good carpenter, you have to spend some time getting good at what you do. These days with the internet, you can see quite easily how to make something that sounds quite decent on the computer.. but maybe you don’t have 10 or 20 songs in you to do that. So, I think it’s become easier, but my advice would be to find something you like and spend a lot of time getting good at it.

MLTR’s seven-city India tour of the band is organised by KCT Entertainment.