How the pandemic has exacerbated troubles for the trans community

'People may not die of COVID, but they may die of hunger,' says transgender rights activist Laxmi Narayan Tripathi 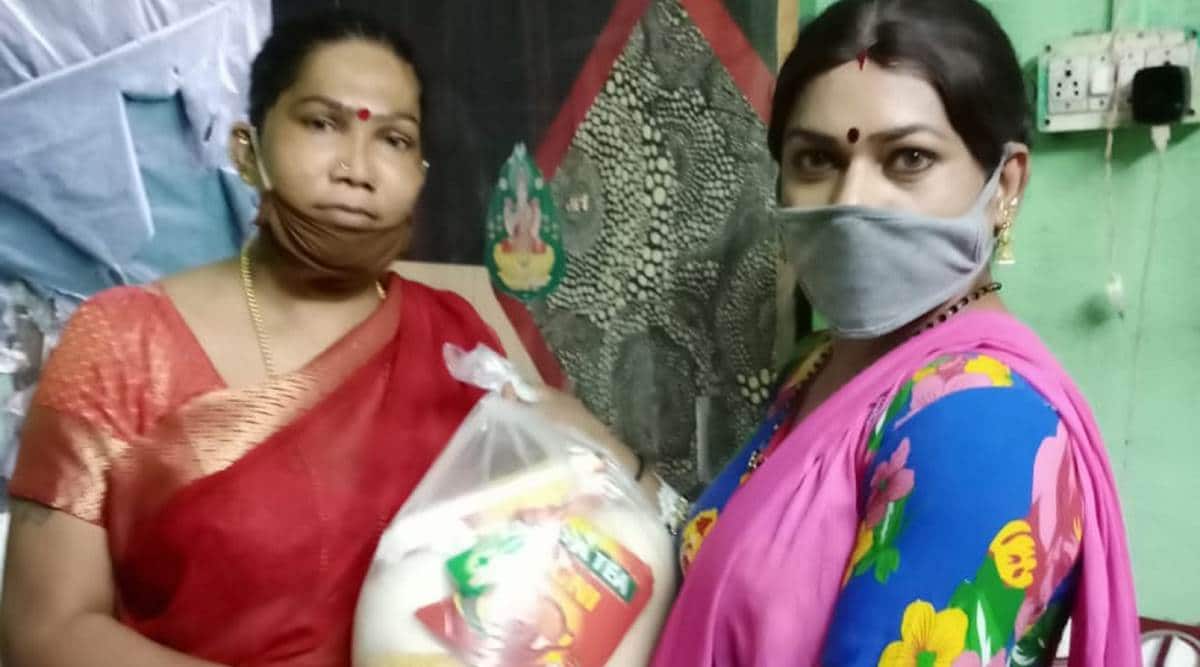 'Identify, The World for Transgender' has reached out and provided essentials to some 130 transgender people across Mumbai, Panvel and Ulhasnagar. (Picture courtesy: Ankita Wagle)

The ongoing pandemic has amplified the challenges faced by the weak and marginalised sections of society, one of them being the transgender community that already faces brutal discrimination. Even though Section 377 – that criminalised same-sex relationships – has been scrapped, the acceptance of the LGBTQ+ community has been slow, if at all. And it is the transgender population that has time and again pressed for inclusivity and basic rights. As we battle COVID-19, their plight has starkly come to the fore.

Twenty-six-year old Zoya’s world was way different when the year had started. “For my daily bread and butter, I was begging in the local trains in Mumbai, before the lockdown, mostly in the ladies’ compartment. When the one-day curfew was announced, I assumed people would return to work and I would continue to make some money. But I soon realised that more and more people had started working from home. As such, my income got affected; the lockdown totalled my life,” she told indianexpress.com.

Zoya used to earn between Rs 800 and Rs 1,000 per day while begging in trains. But, she knew this was not something she wanted to continue doing. “Naturally, because of the lockdown, people stopped stepping out of their house. That is when my only source of income took a hit. One day, I earned Rs 450 only, which was not enough. I have to pay the rent for my room, pay my other bills – I was worried and stressed,” she continues.

Zoya worries that people’s behaviour towards the transgender community will change for the worse, even when things go back to ‘normal’. “I would notice people would get awkward around me in trains. And now, we are in the middle of a pandemic. The world has changed. Masks and sanitisers have become mandatory. When things start opening up again, will people even accept us? My life’s goal is to become a professional photojournalist, but as things stand today, people who are more qualified are being laid off; it does discourage me sometimes. But there is also hope that someone will give me a chance,” she says. 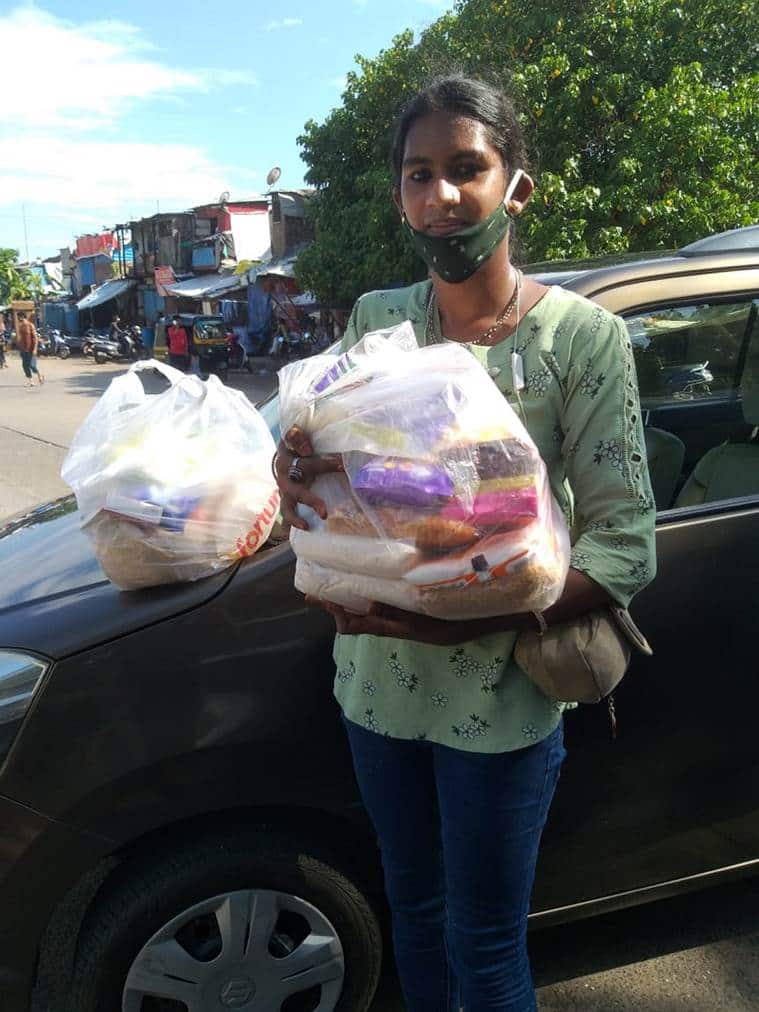 Zoya used to earn between Rs 800 and Rs 1,000 per day while begging in trains. But, she knew this was not something she wanted to continue doing. (Picture courtesy: Ankita Wagle)

As of now, Zoya, who owns a DSLR camera and has studied till the 5th standard, is doing some freelance work as a photojournalist, and while it has been difficult, she doesn’t want to return to begging in trains. She wishes more transgender people, including herself, would find employment.

It has not been any different for 39-year-old professional lavani dancer Vidya Sagar who is without work these days. She is at home in Maharashtra’s Ulhasnagar with her family – brother, sister-in-law and nephew – barely making ends meet. “I could not envision that the world would change like this. Even in March, I thought the lockdown would go on for a few days, and then things would go back to being normal. The months between March and May are pretty busy for us, because we have many back-to-back shows. This year, these months were spent in lockdown; events got cancelled overnight. I would often go to Pune to perform there, but this time, I could not. And that took a heavy financial toll, because I could save absolutely nothing,” she shares, adding, until last year, her savings would help in the off-season months, when shows would be few.

“I have a few friends who used to beg on the trains, and on roads. They are struggling right now, asking others if they can chip in and help them,” says Vidya who, because of the uncertainty of the times, has been doing some tailoring, too. While business is slow, she has used up discarded pieces of cloth to stitch some masks. “No one knows what the future is going to look like; at least I will bring home some money.”

In Panvel, Maharashtra, Tina Gupta wonders if she will be able to knock on car doors and beg for alms. “We are a group of eight, who have our designated areas at traffic signals. In lockdown, we could not buy even the most basic of commodities like rice, and dal to fulfill our daily necessities; forget about sanitisation kits for protection. We used to wander around in the hope that local vendors would help us, but our efforts were in vain. Sometimes, it makes us wonder if we are even considered to be normal human beings,” she says.

Luckily for Zoya, Vidya, and Tina, they have come in touch with Ankita Wagle, the founder of a pan-India initiative called ‘Identify, The World for Transgender’ that is providing support to the community in the pandemic.

“Ankita contacted me through a mutual contact, and asked me how I was doing. Later, I was provided with an essential kit that had some food supplies — like rice, dal, aata, oil, salt, dry snacks — face masks, sanitisers, and other precautionary items. Before that, I did receive some help from a few train passengers, who knew me personally. But it was not much, and if I have to make ends meet, I need a steady flow of income,” Zoya says.

Ankita tells indianexpress.com that since its launch in June 2020, Identify’s five-member team has already reached out and provided essentials to some 130 transgender people across Mumbai, Panvel and Ulhasnagar. “I had happened to read an article online on the transgender community and the situation in lockdown. The thought that arose after reading it, was to do something and lend a helping hand to the community. Hence, the initiative came into existence,” she says, adding the team looks into research, interaction, coordination for funds, essentials, and finally, the delivery of commodities to the community. Professional lavani dancer Vidya Sagar is without work these days. She is at home in Maharashtra’s Ulhasnagar with her immediate family. (Picture courtesy: Vidya Sagar)

“Their situation is still not good, but we are trying as much as we can to support them. This is one community that has been ignored largely by our society. Through Identify, we want to spread the message of equality. I was fortunate enough to have the support of my family, friends, relatives who helped me raise funds to arrange for the essentials,” says Ankita.

Dr Yoga Nambiar, an activist from Maharashtra and the founder of Global Rights Foundation, says she has some 7,500 transgender people from across the state registered with her. “Their basic occupation is begging — and in this pandemic, they have not been able to do that since the trains are not running, there are no weddings or badhaai. For the last three months, I have been getting some groceries for the community through crowd-funding. Their condition right now is horrible. Additionally, there are many who are into sex work, and as of date, they do not have enough money to even buy a vada pao! We have even started a community kitchen to help them with one meal every day. I am trying to do a lot of activities, and so far I have been able to reach only 1,200 people,” she weighs in.

Satvik, a Gurugram resident, says that not just women, but even transgender men are facing discrimination. Speaking about his experience, he says the lockdown has limited his movement, making him worry about stocking up on his hormone medicines. “And even when I step out to buy them – since they are not available online – I invariably get strange looks from people. These are difficult times, especially for us, who do not receive support from family. In the absence of jobs and financial independence, things become more complex. For society, we have always been invisible – so, we have to help ourselves because no one else will step up,” he says.

Currently on the lookout for a job, Satvik says he has received help from transgender rights activists Laxmi Narayan Tripathi and Aryan Pasha, who have reached out to many trans men and women to provide them with essentials in lockdown. 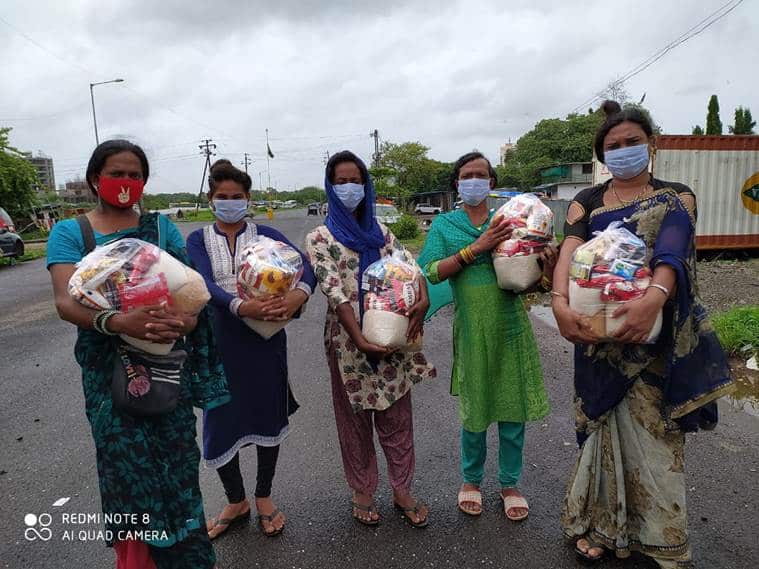 ‘Times like these make us wonder if we are even considered to be normal human beings.’ (Picture courtesy: Ankita Wagle)

“Basically, what happens with the transgender community is that there is usually some incongruity in their official documents in terms of their birth name and gender, because of the transition. Which is why the documents do not match, and they are not able to avail the government schemes. For this very reason, they find it difficult to land jobs, too, despite their education. People have been contacting us ever since the beginning of lockdown, and Laxmi and I have tried to provide financial support to many of them. Through numerous collaborations, we have distributed some 38,000 kits all over India,” says Pasha.

He goes on to say that even in quarantine centres, there are no specific spaces for transgender patients, wherein they can feel comfortable. “You cannot expect a trans man to live amid women because his documents suggest he was born a female.”

“Through our initiative, we are making sure that nobody should go hungry,” adds Tripathi.

“While it would be wrong to generalize that only the transgender community is facing employment and other such problems, it is also true that the government has to take some responsibility. The community suffers because there are no permanent jobs for them. Four months is a long enough time for people to come to the streets; they do not have the money to pay their rent. As it is they are vulnerable because of their gender and sexuality, and we know this is a patriarchal world. I keep saying this, people may not die of COVID, but they may die of hunger. As such, I am planning to help trans men and women become a part of mainstream society by means of entrepreneurship,” she tells indianexpress.com.

At meeting with PM on floods, Nitish Kumar flags non-cooperation from Nepal