Durga, the Himalayan goddess, arrives to reign over the megapolis of Kolkata

While Durga rituals started on Mahalaya, the last day of 'Krishna Paksha' (dark fortnight) in the month of Ashwin according to the Indian calendar, the peak festivities begin on the sixth day's evening when priests "breathe life" into the clay idol through a ritual called 'bodhan' or awakening 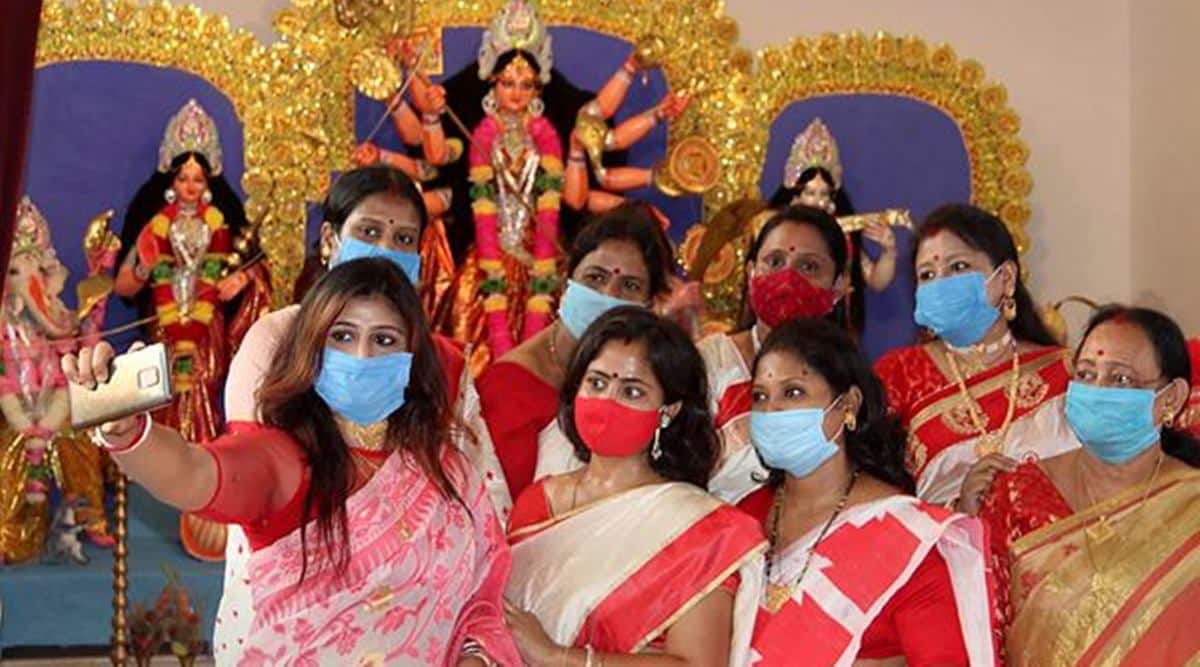 Women take a selfie in front of the Goddess Durga idol at Balurghat in South Dinajpur district. (PTI Photo)

In Kumartoli, a narrow street in north Kolkata, where ‘Kumhars’ (clay sculptors) have lived for centuries, statuettes of Durga, the ten-armed goddess who will reign over this great metropolis for five days starting from Monday, are being carted off by porters using ropes and bamboo poles.

Last moment finishing touches are being given to those left in the assembly line of the gods which have sprung up in the studios which dot the lane and will ship out on Monday or  ‘Shashti’, the sixth day of the ‘Devi Paksha’ (festive days of the goddess).

“This whole area, now buzzing with artists working on idols, will look deserted when the goddesses are carried to household and community pujas,” said Deepak Dey, 48, who runs a studio shop specialising in miniature goddesses, which many buy for festivities at home.

ALSO READ |Durga Puja 2021: Pandal themes that range from Burj Khalifa to Bollywood and Kolkata in the 70s

The pandemic has dimmed the festivities somewhat, and orders are fewer but “still good enough to give bread and butter to our community,” said Dey.

In a unique ritual that underlines the societal equality the carnival of the goddess seeks to promote, soil borrowed from the red-light districts of Kolkata is ritualistically mixed with silt from the banks of the mighty river Ganges to make the clay from which the gods are sculpted.

“The clay represents all sections of the society. The ritual was probably started to emphasise that the Mother goddess belongs to everyone and not just the rich and the powerful,” said Deepankar Chatterjee, Secretary of the `Sebayit’ (hereditary servitors) Executive Council of Kalighat temple, who is also an organiser of the Durga Puja in that area. While Durga rituals started on Mahalaya, the last day of ‘Krishna Paksha’ (dark fortnight) in the month of Ashwin according to the Indian calendar, the peak festivities begin on the sixth day’s evening when priests “breathe life” into the clay idol through a ritual called ‘bodhan’ or awakening.

The Devi Mahatmaya and Devi-Bhagwat Purana legends followed by the Shakt school of Hinduism speaks of the goddess Durga who was created and armed by the gods to defeat King Mahishasur, a demon Lord turned tyrant.

Legends describe how she went into battle sitting atop a lion to slay the hated ruler and earn the name ‘Mahishasurmardini’ (slayer of Mahishasur).

However, Mahishshurmardini whose early statuettes have been found in Ghazni in Afghanistan and Mysore in Karnataka has slowly made eastern India and Kolkata, in particular, her “home” over the past few centuries.

While no one is quite sure where the legend of Durga originated, worshippers in Kolkata are certain that she is their mother and daughter rolled into one.

According to folk tradition, she comes home from the Himalayas to sojourn in her ‘Baper Bari’ (parents’ house) with her four children — Ganesha, Lakshmi, Sarasvati, and Kartik — reaching the Gangetic delta on Shashti and returns on the 10th day from ‘Mahalaya’ to her Himalayan abode when her idols are consecrated into the river.

Said Uday Shankar, well known Delhi-based cartoonist who grew up in Kumartoli and is currently judging a Durga sculpture competition in the city, “The creativity that I am witnessing here despite pandemic and lack of money in the market, is testimony to artistic resilience of our sculptors.” 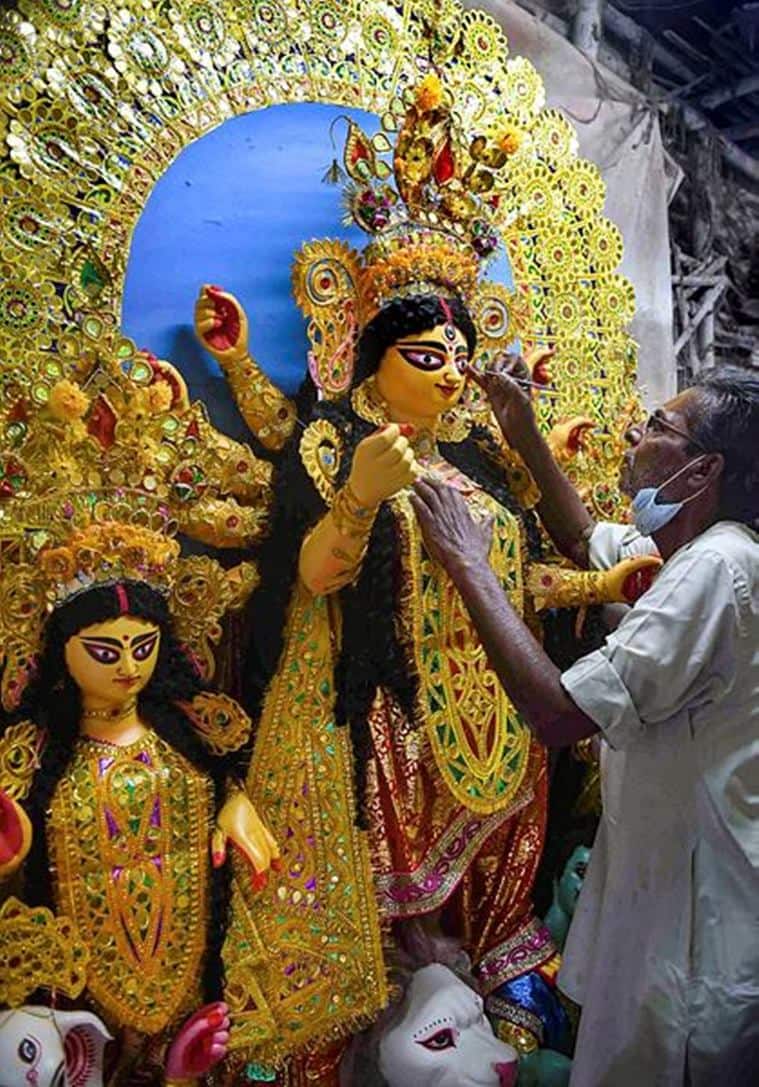 Kolkata: An artist decorates an idol of Goddess Durga ahead of Durga Puja festival, at Kumartuly in Kolkata.(PTI Photo)

New and innovative themes have cropped up. From the highly political theme of Durga being depicted as a mother hit by the ongoing National Registration of Citizens and being carted off to refugee camp to the innovative marquee of a Bioscope made from junked household appliances, through which Durga can be viewed, artists here “have given us food for thought,” said Shankar.

However, their style, too, has become a theme for many community pujas with one puja in south Kolkata’s tony Hindusthan Park area creating a marquee shaped like an old Zamindari mansion.

Durga Pujas at the homes of Bengal’s aristocrats is about four to five centuries old. By the time the East India Company wrested the ‘Diwani’ (taxation rights) over Bengal, these pujas had transformed into celebrations with musical and nautch soirees where the English rulers too were invited.

However, a little over a century back, the concept of community pujas became popular where celebrations were held by collecting donations from the public at large. Many of the pujas had links with revolutionary organisations of that era. The massive public involvement made the festival, Kolkata’s and eastern India’s biggest annual carnival, and a tourist draw for many from other parts of India and abroad. Most offices shut down or work with skeletal staff during this time.

With such popularity for a religious festival, which cuts across religious divides and has the city’s Muslims, Christians, and Parsis joining in, it is but natural that political patronage has become intertwined with faith.

Chief Minister Mamata Banerjee has been kept busy for the last three days inaugurating Durga pujas across the city, while many a puja in this highly political city, boasts of a connection with a ruling party or an opposition party leader.

“At one time, even the CPI(M) used to have stalls at Puja venues! Even today parties see the Puja as a major mass mobilisation vehicle,” Prof Chatterjee said.

Of course, with a pandemic still raging, the state government and the Calcutta High Court have given orders to control crowds and to maintain safety and social distancing at all Puja venues.