Barbie gave in to decades of criticisms and recently came out with a number of dolls in various shapes and sizes, but does this really impact the Indian girl?

To cater to the Indian consumer Mattel toys Indianised the Barbie with bridal wear and sari but kept the blonde look intact for many models.

Raiford Guins, et al, write in ‘Popular Culture’, Barbie was then called a traditional Barbie, and it was a cultural-cross. A white American with a standard face with slender and tall Euro-American body wearing a shiny sari and a bindi; and she was not called the ‘Indian Barbie’ but ‘Barbie in India’.

By 1996, Mattel made its first genuine attempt to create an authentic Indian Barbie. But the doll had the exact same physique as the standard blonde Barbie with the same height and impossible body measurements. Her pigmentation was deepened only by a slight degree, and her eyes were made hazel rather than blue. The rest was the same — pink lips, coy smile, shining eyes, and the fictitious physique. With no significant increases in its sales, Mattel then promoted the Expressions of India Collection in 1997 as a part of the Leo Mattel joint venture. The Collection was a last attempt at making the Barbie doll look authentically Indian; however, the alterations were merely superficial changes in her dress and jewellery, and that too to just six to eight different dolls based on a few of the Indian states.

Barbie has failed to create the same magic in India that she had created in her mother country and some other parts of the world. Since Barbie was launched in 1959 in the US, she was re- and re-born in many avatars — as an astronaut, a CEO and even a presidential candidate. In 2014, to up sagging sales, Mattel launched the Entrepreneur Barbie, as veterinarian, football coach, astronaut and businesswoman. The company said that its new lines hope to make Barbie a ‘New World charm’, seducing tech-savvy young girls, which it sees as future customers. The company hoped that along with her tablet, briefcase and a smartphone, Entrepreneur Barbie would show girls that there’s more to her than a body. This avatar has been backed by many ‘real’ women entrepreneurs in the US, who serve as her ‘Chief Inspirational Officers’ (CIOs). 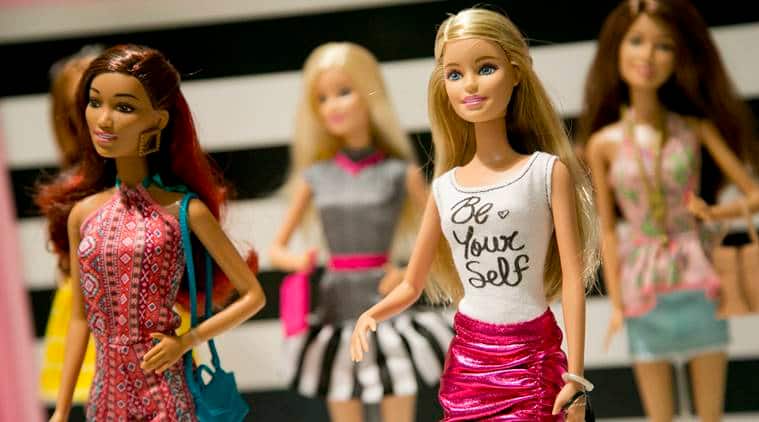 Barbie has been held responsible for eating disorders and charged with offering girls a wholly unrealistic body image. (Source: AP)

Recently, Mattel gave in to years of criticism about the dolls’ looks and launched a new line of Barbies with different body types and skin tones. The iconic doll will hit the shelves in different shapes, from original to petite and from tall to curvy. Barbie will also be available in seven different skin tones, 22 eye colours and 24 hairstyles.

But, will this negate the ‘negative body image’ created by Barbie? Will it make any impact on Barbie’s future sales and the psyche of India’s little girls and mothers?

As Priti Nimani says in her study ‘Globalization Versus Normative Policy: A Case Study on the Failure of the Barbie Doll in the Indian Market’, “For Indians, the issue goes beyond the potential for instilling negative body images in young females. Barbie offends public norms through a way in which her body is hyper-sexualized (even in her slightly changed new avatars). Barbie doll is a silent object that reaches out through her physical characteristics and those characteristics include her clothing, her face, and the one thing that never changes about Barbie, her body. Without her body, Barbie would be nothing.”

It is possible that some mothers may be repulsed by Barbie’s looks and some may buy Barbies that have similar skin colours as their daughters, but will they also buy Barbie’s lifestyle? Answering that is tough. Barbie just did not come with perfect face and figure but also perfect hair, make-up, clothes, the works. She is what our ‘beauty contests’ (also a borrowed concept) represent – stereotyping the perfect beauty, success and lifestyle. Once a girl bought a Barbie, she was compelled to maintain Barbie’s lifestyle, for her doll and for herself. That meant keep buying Barbie’s accessories like dresses, handbags, jewellery, make-up kits, doll houses (with pools), and, of course, more Barbies. Barbie has a commercial soul and did not just bring fun into a girl’s life, she brought ‘unwanted’ consumerism. Little girls spent hours and huge money on make-up, harmful hair dyes — subjecting their young hair to hair straighteners and curling irons — forcing their parents to spend a fortune on branded clothes.

The doll has been held responsible for eating disorders and even deaths. A typical Barbie doll is 11.5 inches, which, at a 1/6 scale, would make her 5 ft 9 inches tall. Her vital statistics have been estimated at 36 inches (bust), 18 inches (waist) and 33 inches (hips). According to a study by the University Central Hospital in Helsinki, Finland, she would lack the 17-22 per cent body fat required for a woman to menstruate. One UK-based woman spent over $1 million in plastic surgery just to achieve that Barbie look. She has become a spokesperson for Barbie, and preaches that in order to be fabulous, you have to be perfect ‘stereotype’.

People have spent millions just to have their houses look like Barbie’s. Socialite Paris Hilton’s (who looks as perfect as Barbie) $200,000 pink car came from the childhood dream to have a car just like Barbie’s. Those who cannot achieve that perfect look and cannot have those material things start thinking of their life as ‘useless’. The looks, the accessories and even the material things are stereotyped. One teenager writes in her essay, ‘This beautiful doll gives a whole new meaning to the phrase “if looks could kill”. Thank you! 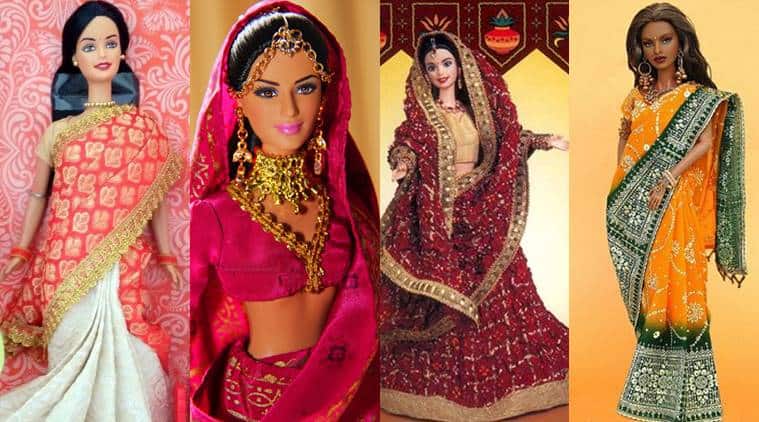 The first Indianised Barbie came to India not as Indian Barbie, but as Barbie in India. (Source: Pinterest)

Till date, Barbie has failed to charm Indian girls with the Barbie lifestyle (though, girls from urban middle and upper-middle classes do have a fascination for the doll, but that’s a very tiny portion of the populace). Now, revamped, will she be able to work her magic on India’s next-gen girls?

I first saw Barbie in a retail shop in Bangalore when I had gone to buy GI Joe dolls for my sons. Frankly, I was disturbed by her physique. By then I had come back after living a couple of years in Europe but still, an overly sexualised doll with reed-thin body and oversized breasts made me wonder: “What the heck is happening to the world!” I had no idea that Barbie was not just a doll but she was a ‘lifestyle’! I wondered if I had a Barbie instead of my innocent-looking cardboard dolls, what would have become of me. This doll had the power to manipulate young minds, and endorsed a rather dangerous and unrealistic portrayal of female body.

Would I buy this doll for my little girl if I had one? I was not so sure.

Come next generation (after mine), Niyati Joshi, a 20-something from Mumbai had about seven Barbies growing up. She followed the Barbie lifestyle to an extent, like when her father brought shoes, T-shirts and hair clips from the US for her from Barbie stores. She also wanted to have a of the ‘life-sized’ Barbie heads to try different hairstyles, but that didn’t happen. When asked if Barbie’s unnatural figure bother her? “No,” she answered, “I looked at it just as a doll that looked like one of the supermodels I saw on the television!” But did she aspire to look like Barbie? ‘No,’ was the firm reply. “It all depended on one’s upbringing,” Niyati concluded.

When I asked a lady from Pune who teaches Social Justice as well as Justice related to Gender Issues and who is also a mother of a 20-something if she had bought Barbies for her girl? “No, she replied, we never bought any dolls for our girl, and Barbie was so adult looking so this doll was out-of-question.” Many Indian parents might have shared the same sentiment 20 years ago.

In a study called ‘Barbie in India: A Study of Effects of Barbie in Psychological and Social Health’, author Suchtra Saha puts forth one of her most interesting findings: “Barbie creates, recreates, and accentuates already existing divides between the binaries like male-female, fat-thin, sexy-non-sexy, beauty-brain and more. From being a plaything Barbie becomes the game maker!”

The creator of Barbie Ruth Handler thought otherwise. Handler had once proudly stated that “parents thank us for the education values in the world of Barbie…they could never get their daughters well groomed before – get them out of slacks or blue jeans and into a dress…that’s where Barbie comes in. The doll has clean hair and a clean face…dresses fashionably, and wears gloves and shoes that match”.

Perhaps, our little girls have not fallen hook, line and sinker to Barbie’s charms. They, perhaps, want to be the game makers! Where is Barbie in the next-generation

Nimani further states in her study that the Barbie possesses her own sets of cultural rules and norms for which she demands a most rigorous devotion. Barbie lovers must engage fully in the Barbie experience! Today’s little girls also have far too many options other than following Barbie like silent lambs; there are other branded dolls as well as brain stimulating toys, sports, computer games, smart phones, and books like ‘Harry Potter’. Also, Barbie is still out of reach to a major population of Indian girls but even those who have a Barbie or Barbies do not seem to want to follow the Barbie till the end of the world.

To the gen next (after Niyati): This is what 10-year-old Tanya, who lives in Mumbai, says.
MB – Do you have Barbie doll?
Tanya – Yes, about 10 of them.
MB – Do you play with them?
Tanya – A few years ago I used to but now I have lost interest. Sometimes, I just dress them up in different costumes and that’s about all.
MB – Any of your friends play with Barbie?
Tanya – Not any more.
MB – What do you play then at home?
Tanya – If a few friends come home we play games on the iPad.
MB – Oh, what else?
Tanya – I also read a lot. Harry Potter is my favourite!

The author is a microbiologist and has worked for food and pharmaceutical companies in marketing as well as business development in countries like Germany, India and the United Arab Emirates. The views expressed are personal.
© IE Online Media Services Pvt Ltd
Subscribe
Sign In
close