How she overcame breast, ovary cancer and trekked all the way to Kailash Mansarovar

Sixty-seven-year-old Megha Phadke decided she would not put her life on hold despite two rounds of the dreaded disease. With early detection, a supportive family and friends and most importantly a steely resolve to get back to where she left off, this sportswoman is the true Pune warrior 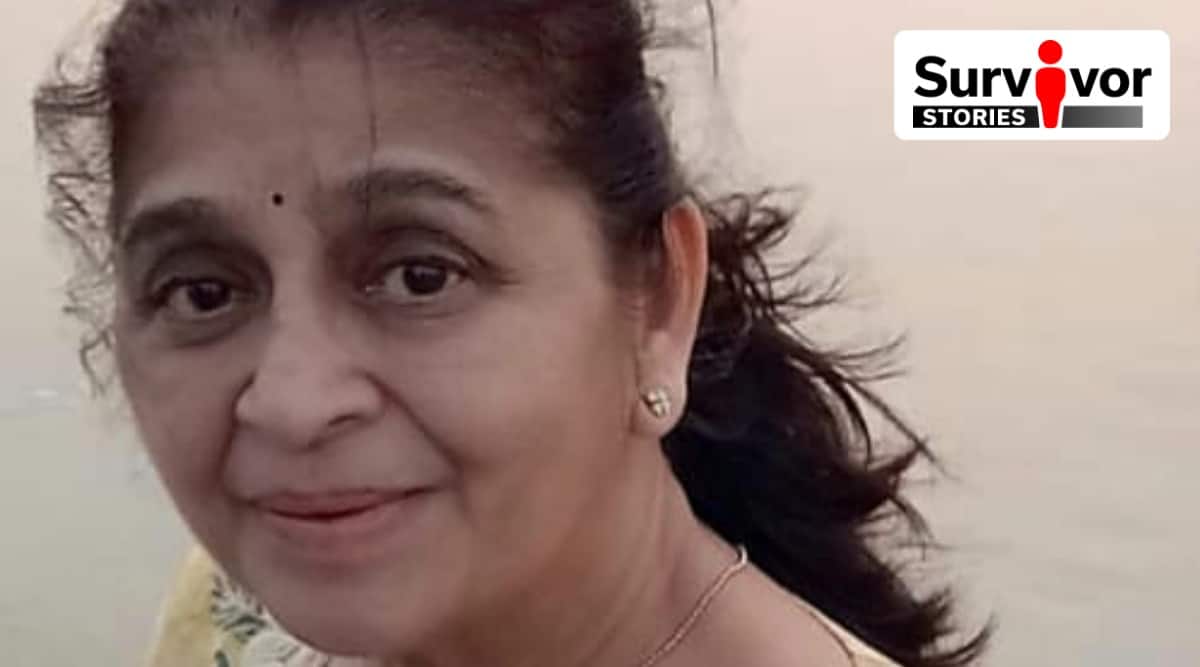 It has been 25 years now since Megha Phadke was diagnosed with breast cancer and she has dealt with it in an amazingly positive manner by accepting the problem and then tackling it. (Express)

There are two choices you make when life throws a curveball at you. Either you get hit or you duck it. Sixty-seven-year-old Megha Phadke, a sportswoman in her younger years, did the latter. Which is why despite a double bout of cancer, she has chosen life to cure her ills, climbing the Himalayas and now providing a home to working women. She has decided that life is not about feeling sorry for oneself, it is about breathing through every cell of your body.

IT ALL BEGAN WITH A LUMP IN THE BREAST

Dr Kamlesh Bokil still remembers how one fine evening, at 6 pm to be precise, she walked into his clinic and announced that she had a lump in her breast. “Mind you, we are talking of 1997 when there were no tech-aided tools,” recalls the Pune-based surgical oncologist, who did a needle biopsy and sent the sample to the laboratory. Megha, who was in her early 40s then, decided to wait for the report before alerting her advocate husband, who was at a meeting in New Delhi. 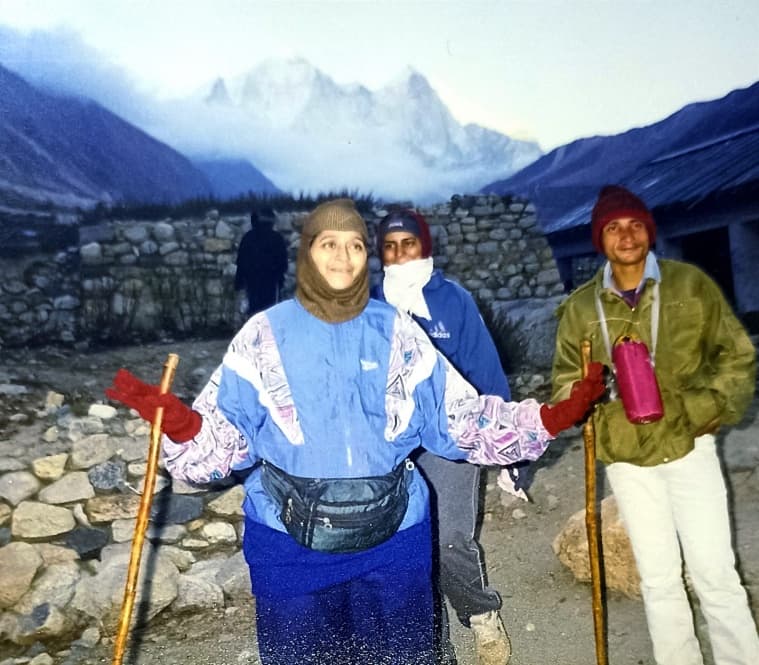 Within four days of the report testing positive for breast cancer, Megha, who was then employed at the Central Excise and Customs Office in Pune, decided to get a mastectomy done. “She did not wait for a second opinion and just informed her husband, who called my dad (who is a surgeon too) and gave his consent,” Dr Bokil says. Ten years later, she had the same matter-of-fact attitude when she was detected with ovarian cancer and underwent a hysterectomy. But not before some conquests of her own.

HOW SHE TREKKED TO KAILASH MANSAROVAR

Megha was an athlete from her school days, representing MES Renuka Swarup Memorial Girls School and Pune University at the national level in volleyball and basketball. She also got recruited in the Central Excise and Customs Office through the sports quota. That’s where she learnt to never give up. So although she had to take an eight-month break from work to complete the drill of an operation and six chemotherapy cycles, she didn’t cave in. In fact, after a full recovery, she got back to her passion for hiking and resumed difficult treks, this time in the Himalayas. An avid trekker, she has climbed high altitudes, including Kailash Manasarovar, the Char Dham holy sites – Yamunotri, Gangotri, Kedarnath and Badrinath – Mukti Nath and the Annapurna Base Camp. 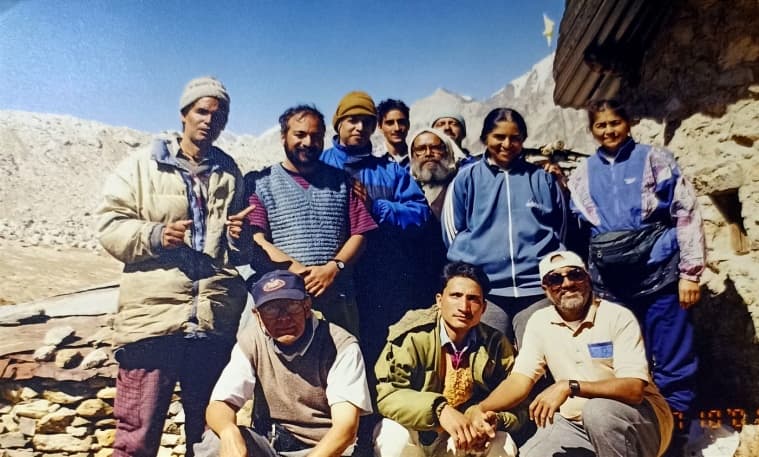 After her operation and six chemotherapy cycles, Megha didn’t cave in. In fact, after a full recovery, she got back to her passion for hiking. (Express)

Megha was the seventh generation in a family that had seen five persons dying of cancer and hence was aware about the importance of early diagnosis and treatment. “My father, Nagnath Limaye, had intestinal cancer and died at the age of 50. I was in the first year of college then. My uncle, who was a doctor, treated him well for the initial three years. Later my father’s four sisters, my aunts, developed cancer too – two had breast cancer and the other two intestinal cancer. Unfortunately, they were not detected at an early stage and eventually succumbed to the disease,” recalls Megha. One aunt survived till she was 65 but the other one couldn’t make it beyond 32. With this family history of cancer, the awareness levels in our family was high,” says she.

Dr Bokil, back then, was a resident doctor at Tata Memorial Hospital in Mumbai and, along with a team, took up a research study to analyse the family tree that could help them find a pattern of cancer which was caused by an inherited faulty gene. “We have been good family friends and considering the strong family history of breast, endometrial, colonic, ovarian and uterine cancers, we advised removal of the breast for Megha,” Dr Bokil recalls.

It has been 25 years now since she was diagnosed with breast cancer and she has dealt with it in an amazingly positive manner by accepting the problem and then tackling it. “Setbacks are temporary and one can never lose hope. Also, I had tremendous faith in the doctor. So, it was just a matter of following advice and waiting for a while till I could resume my treks,” says Megha, who is 67 now and manages a women’s hostel apart from coordinating a fast food centre.

PICKING UP THE PIECES

During her rehabilitation journey, she kept her cool. “At that point in time, my son was in college and could manage his chores. My advocate husband was busy with his own criminal practice. I was not really scared about what would happen to me and my family after I was diagnosed. We had come to grips with the situation and decided it would not be such a shattering experience. I simply would not let it. Also, since the disease was picked up early, I was eager to complete the course and get back to my circle of friends,” she says with a smile. Her friends have been her greatest pillars of support. Apart from a group of four friends from the Central Excise and Customs office, who go on trips abroad, Megha is part of a 21-member school group who make it a point to meet at least once or twice a month. “I had tremendous will power and determination. The support system that I got in my family and friends helped me navigate these difficult phases in my life,” she says.

Also Read |Signs of ovarian cancer you must never ignore

For women, losing a breast can be an emotional experience apart from dealing with shoulder, neck and cervical pain. Posture imbalance and abnormal gait are added problems. But Megha learnt quickly to deal with these hurdles and every three years changed the silicone prosthesis crafted to fit in the post-mastectomy brassiere. “Reconstructive breast surgery was not common those days. My husband has been very supportive and it was reassuring that these physical changes had not impacted our relationship,” she adds.

JUST WHEN SHE GOT BACK HER LIFE, CANCER HIT HER A SECOND TIME

While Megha got back to her routine, treks and excursions with friends abroad, cancer hit the second time round when she was in her 50s. In 2007, she was diagnosed with ovarian cancer. Dr Bokil operated upon her and removed the ovaries and uterus. She had to undergo chemotherapy cycles again. But this time round, she felt terribly weak and admitted to feeling tremendous pain in her legs. “Despite so many years of trekking, I was lucky to prevent any major injury or pain in my legs. But for the first time, due to the cancer, I understood what severe leg pain means,” Megha recalls. She underwent a similar drill and post treatment and recovery, slowly resumed her routine rhythms. As a feel-good move, she and her three friends scanned the internet and looked for good deals to ensure affordable month-long trips to Europe and America.

Today, Megha is happy that she refused to feel sorry for herself. “I had decided on being positive and keeping the faith in doctors and medicine. A huge network of friends and supportive family was the only way I could deal with this disease,” says she, now managing a women’s hostel and running a fast food centre. What she forgets to mention is her steely life force and a beautiful mind.