No matter what studies say, the question of how many almonds one should have is subjective as the quantity may vary due to the environment, climate conditions, individual exercise routine and ongoing dietary intake. Raw almonds are known to produce heat, especially in the humid, tropical climate such as India and thus, it’s advised to soak the almonds overnight in water or milk before consuming them, says Ushakiran Sisodia, Head of Diet and Nutrition unit, Nanavati Hospital 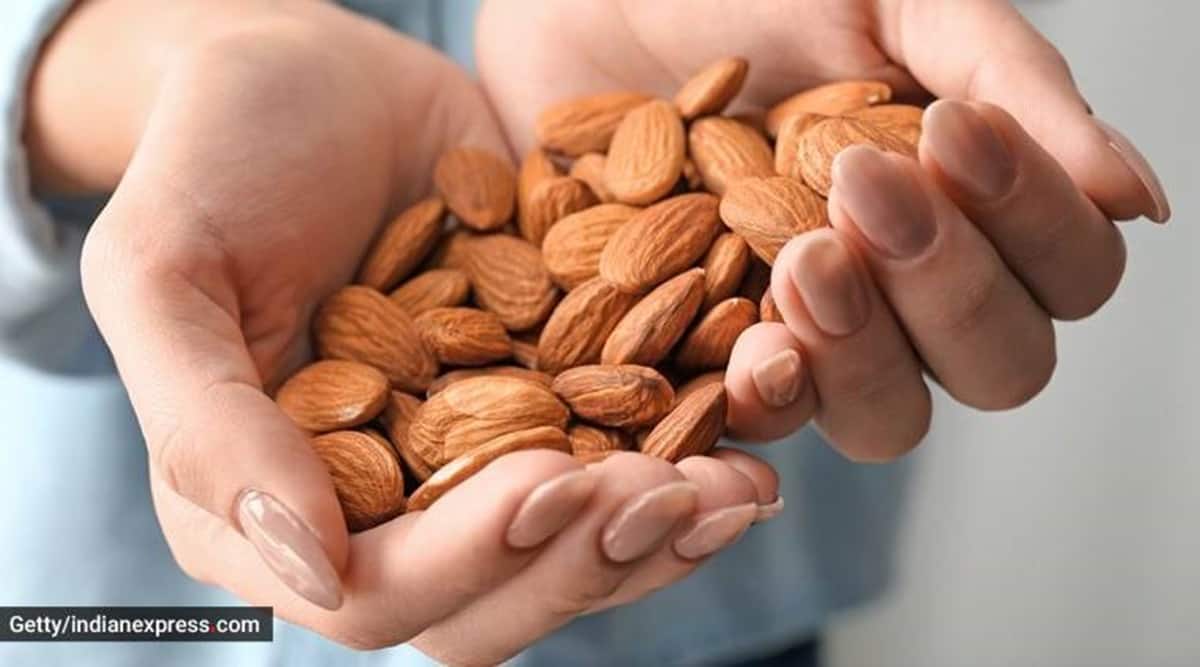 Though the advantages of almonds outweigh any debate, it’s always advisable to seek professional advice before making them a core part of your diet. (Source: Getty)

We know that almonds are nutrient-rich and a healthy substitute for snacking. Now a new study finds that eating 56 grams of almonds daily — the equivalent of approximately 46 almonds — can improve gut health by promoting levels of butyrate.

The purpose of the study was to establish that incorporating almonds into the diet could be a way of increasing fibre intake without triggering gut symptoms.

Also Read |Is it expensive to be a vegan? Is it low in protein? Can it lower testosterone levels in men?

Dr Alice Creedon, a post-doctoral researcher in the Department of Nutritional Studies at King’s College London and an author of the study, was quoted as saying, “Butyrate is important to gut health as it acts as the primary source of fuel for the cells of the colon, allowing them to function correctly and optimally. It is also involved in signalling to the gut to initiate the process of nutrient absorption. In addition, butyrate produced in the gut can enter the bloodstream where it is involved in the regulation of health in other areas of the body, such as the liver, brain and lungs.”

The study, which appears in The American Journal of Clinical Nutrition, is based on the benefits of butyrate, which keeps bacteria and other microbes from entering your blood, which is key to reducing stomach inflammation and managing conditions like Irritable Bowel Syndrome and bloating (IBS).

Reacting to the study, Ushakiran Sisodia, Head of Diet and Nutrition unit, Nanavati Hospital, says, “Almonds are a nutrient-rich staple as they are rich in B complex vitamins such as Vitamin B1, Thiamine, Vitamin B3 and Folate, Vitamin B9, good fats and minerals. It is stated that an ounce of almonds, which is around 23 whole nuts, keeps the heart healthy along with an adequate supply of plant protein, fibre, magnesium, iron and calcium.”

Also Read |How much chia seeds should you consume in a day?

This is not the first study to establish the benefits of almonds. “Multiple studies in the past, similar to the one recently published in The American Journal of Clinical Nutrition, have attempted to shed light on the holistic physiological and aesthetic benefits of consuming almonds in different forms. With time, instead of consuming a simply soaked almond, people now have the options of almond milk, butter, oil and an entire range of beauty products, used by both men and women alike,” she adds.

However, the answer to how many almonds one should have can be subjective as the quantity may vary due to the environment, climate conditions, individual routine (exercise etc) and ongoing dietary intake. “Raw almonds are known to produce heat, especially in the humid, tropical climate such as India and thus, it’s advised to soak the almonds overnight in water or milk before consuming them. Though eating 6-7 almonds early in the morning with breakfast is ideal, each individual should observe the changes in the body and decide the quantity of almonds accordingly,” advises Dr Sisodia.

“Nonetheless, for youngsters with high intensity, tiring job profiles, eating about 20 almonds throughout the day, instead of fast foods such as wafers or biscuits can provide the necessary burst of energy and nutrition with the help of its mineral content. It’s also beneficial for children as the minerals are necessary to improve bone density, red blood cell count and muscle strength,” she adds.

According to her, almond is also ideal for individuals over 50, or those with diabetes and heart conditions, as it reduces cholesterol and maintains blood sugar levels. Some studies have also proved its relationship with reducing the risk of certain types of cancers related to the colon or gut and even conditions that cause cognitive impairment such as Alzheimer’s.

Dr Sisodia also says it’s advisable to use almond-based beauty products after discussing the nature of your skin/scalp with your dermatologist. “However, being rich in antioxidants and Vitamin E, almonds do offer excellent benefits for skin and scalp. In most people, regular use of almond milk and oil can help the skin become supple, clearer and stretch-mark free. They can also help to relieve the dark circles around the eyes and improve the eyesight.”

So, though the advantages of almonds outweigh any debate, it’s always advisable to seek professional advice before making them a core part of your diet. Following the trend can be useful, if done with a result-oriented mindset.

The participants in the current study were 87 healthy adult females and males, ranging in age from 18 to 45 years. They self-reported eating snacks regularly, at least two a day, and that they were not on a moderate or high-fat diet of over the recommended 22 grams of fat daily. For the study, the researchers divided participants into three groups, differentiated by the food with which they replaced their habitual snacks.

One group ate two portions of 28 grams of whole almonds each per day, while another group had two portions of 28 grams of ground almonds daily. The final control group ate muffins that delivered an equivalent amount of energy to the body as the almonds. The trial period was four weeks. At the end of the trial, researchers found that the almond groups had significantly higher levels of butyrate in their faecal matter than did the control group, 24.1 micromoles per gram rather than 18.2 micromoles per gram. No significant difference was observed in different groups when it came to gut transit time — the amount of time it takes for food to enter and exit the digestive system — or stool consistency. This is important for body tolerability.