The magic of white shirt: What inspires designers to romance the timeless garment

Summer’s style staple — the classic white shirt — plays perennial muse to these designers. Find out what keeps them cottoned on to this seasonal essential. 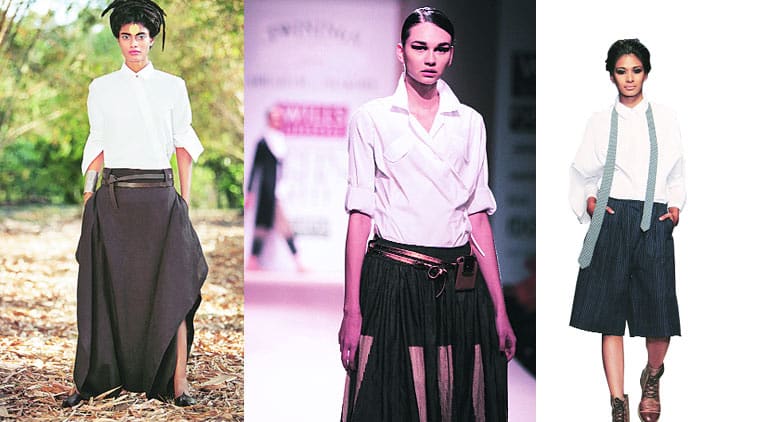 Here fashion designer about what inspires them to reimagine the timeless garment season after season.

A garment as innocuous as the classic white shirt has inspired designers for generations. This summer wardrobe must-have gets a modish makeover every year, but that’s at the hands of a chosen few that plackets get subversive, collars and cuffs take centre stage, exaggerated volume adds drama and handloom fabrics lend character. Over the years, these designers have either revelled in its quotidian character or toyed with its rather rudimentary construction to create sheer magic. Here, they talk about what inspires them to reimagine the timeless garment season after season:

Colour Block
Vibrant colours are intrinsic to artist-designer Payal Khandwala’s creative oeuvre, with jewelled tones co-existing in colour-blocked cohesion. That this melange of colour is intermittently punctuated by the quietude of white — in the form of a tailored shirt — is a stratagem she employs effectively. “We do so much colour, it’s nice to have something to break that,” says Khandwala, who has paired white shirts with saris, palazzos and skirts in collections past. “A well-made white shirt can make any outfit look sharp,” says the designer, who loves to play around with the length and width of the cuff, in addition to the length of the sleeves. “I prefer oversized shirts in softer fabrics. Stiffer fabrics make for sharper silhouettes,” she says. And for those wary of pairing a cotton shirt with a sumptuous sari, she recommends a white silk shirt.

Basic Essentials
That Arjun Saluja’s Spring-Summer 2008 collection was evocatively called ‘Bu-shirt meets Dhoti’ could be indicative of the fact that the “bush shirt”, an old-school term Saluja likes to use, features prominently in his design dictionary as well as his personal wardrobe. “There’s a certain crispness and a contradictory laziness associated with a white shirt. It’s very versatile and easily adapted to trends,” says Saluja, whose earliest associations with the white shirt come from his mother, who used to wear them regularly. Today, he has given the basic shirt multiple makeovers, whether it is for a collection inspired by a literary work, or one drawing upon the fisherfolk of Goa or a migrant construction worker he encountered. His treatment of the white shirt has varied from a cropped choli-like form, a flowing kurta shirt, draped versions and even renditions of a t-shirt. And this fixation continues in his derivative line ‘Essentials’, wherein this season, the shirt is longer than ever.

Classical Touch
One of the first domestic collections that David Abraham and Rakesh Thakore of Abraham & Thakore ever created was a line of white shirts for multi-designer store Ogaan, 20 years ago. “The shirts were made of poplin, treated with light embroidery, abstract black polka dot applique and trims,” recalls Abraham. Cut to 2015 and their current summer edition has shirts made from dhotis, incorporating the border of the garment as well. “When it comes to longevity, the white shirt has continued to be a part of our design story. There is something rather upbeat and fresh about it,” he adds. What also draws the duo to the shirt is its gender-neutral appeal and its malleable character. “For Autumn-Winter, we have made slightly baggy, anti-fit versions. But we haven’t played around with it too much because one doesn’t want to lose the original reference point,” says Abraham.