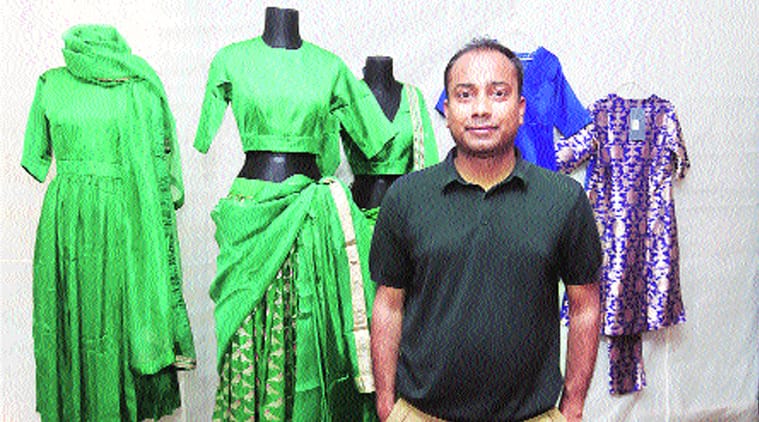 Sanjay Garg at Bungalow 8 preview of his Signature line.

If anyone harboured reservations about designer Sanjay Garg’s foray into ready-to-wear occasion pieces last year, the response to his Signature line’s preview in Mumbai would have cleared their uncertainty. Displayed at concept store Bungalow 8 in Colaba last week, pieces from Garg’s eponymous line were flying off the shelves, as women bustled about getting themselves measured, while others patiently queued up outside the fitting room.

“I’m overwhelmed by the response. It’s heartening to know that there is a big tribe emerging that understands and appreciates handwoven fabrics,” said Garg. With Rajasthani folk music playing in the background and whiffs of gajra floating in the air, Garg’s collection — understated silk and brocade lehengas, long kurtas with straight pants, A-line dresses and quilted jackets — was displayed amidst chunky tribal jewellery at the store. In jewelled tones like rani pink, indigo, peach, green, gold and beige, the tailored pieces were devoid of external embellishments, with animal motifs woven into the rich fabrics.

“Every day has been a learning experience. I thought the jackets wouldn’t do well given Mumbai’s weather, but everyone is going for them. Also, with this line, I’ve realised that there is a space for tailored Indian garments beyond the anarkali,” he says.
While the lehengas start at Rs 85,000 and go up to Rs 2 lakh, the dresses and jackets range between Rs 13,000 to Rs 30,000.

“A lot of work goes into each piece and I’ve only kept the mark-up price in mind,” states Garg. These designs, as with his sari label Raw Mango, have been spotted on several celebrities since their debut at Lakme Fashion Week’s (LFW) Winter/Festive 2014 edition in August last year. “Youngsters get to know about these textiles if they spot celebrities wearing them. It’s a definite advantage,” he says.

Although the Signature line made a grand ramp debut at LFW, the reticent Garg confesses that he is in no hurry to keep up with the fashion week game. “I don’t want to come under any pressure. I don’t compromise on quality and always want to add value to the market,” he says. In the works are new pieces in the Signature line as well as a collection for Raw Mango, called Sooti.

‘Cops tried to frame me, but NIA knew I was innocent’