Christian Louboutin on his new Bandra outpost and his love for all things Bollywood. 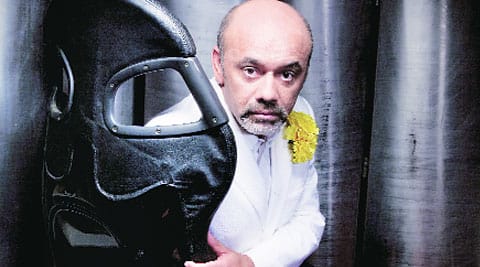 For a man who says his life “is a succession of fortuitous coincidences”, it is no coincidence that Christian Louboutin’s third retail space in India, and his 89th boutique worldwide, is located bang in the heart of Bandra, Mumbai. Or that it is housed on the fourth floor of Sussanne Roshan’s concept store, Bandra 190. The footwear designer extraordinaire — synonymous with his red-lacquered soles and high-heeled creations — is a canny businessman, an avid Indophile and purveyor of trends. While the 50 square metres of prime retail space is awash in his trademark colours, with a red leather-trimmed carpet and brown wooden floors, Louboutin himself is dressed in an orange Lacoste T-shirt with navy slacks, his feet shod in maroon signature Yacht Spikes. With his iconic red-soled creations lining the display racks, the colourful space is living up to its “pop-up” boutique projection.

In town to introduce Mumbai to his newest venture, the Frenchman discusses high heels, business plans and weddings with us. Edited excerpts:

This is your third retail point in India. What insights have you gained into the market so far?

I first came to India when I was 15 and have been coming here regularly for 35 years now. The very interesting thing about Indians is their strong sense of identity. For instance, I’m known for my shoes, probably more for my high-heeled shoes. But when I opened my store in Delhi, women asked for flat shoes. I was quite surprised because in some markets, people only expect high heels. I do have flat shoes, but here it seemed I didn’t have enough flat shoes. And I was very intrigued, because it just proves that Indian women know what I’m about, but they are also very particular about what they want and need.

Another prime aspect is the importance of colour. Here, black is not non-existent, but it is not that important. Whereas worldwide, it’s common for black shoes to generate almost 90 per cent sales. I do coloured shoes also, but the core business is really black and this is not the case in India.

Have you noticed set patterns about buyers in Delhi and Mumbai?

In Mumbai, demands are more variegated — for heels of all heights. Whereas in Delhi, it’s either flats or very high heels.

It would seem that people in Mumbai are more mobile, maybe walking on the streets more than in Delhi. Demand is definitely for functional footwear, as also for different functions, occasions and venues.

Why did you open the “pop-up” store in Bandra and, more specifically, at Bandra 190?

Mumbai, at the end of the day, is not one city, but two cities. Just like in New York, where my store Downtown hasn’t cannibalised my store Uptown. If you live in Bandra and Juhu, you probably don’t go to south Mumbai. It’s two very different customers. Also, Bandra, to me, has an electric energy. It’s a vibrant suburb with spirited people.

As for my association with Sussanne, we go back a long way. We first met in Mumbai through common friends and saw a lot of each other in Europe where she often comes for work. About a year ago, she told me about her plans for Bandra 190 and I thought it was interesting and got on board.

This move cements your Bollywood connection.

I may have first come to India when I was 15, but I already knew about Indian movies and actors. In Paris, next to my parents’ apartment, there were two cinema houses that played Bollywood films. So, I’ve been watching films starring Dilip Kumar and Hema Malini since I was a kid. The second theatre played art movies by Satyajit Ray, Guru Dutta and other Bengali directors. So, I’ve always loved Indian cinema. In a way, this is almost like a childhood dream coming true.

Tell us about the wedding suite you’re launching at the Horniman Circle store in Mumbai.

What is important for me is that my stores should always be a reflection of the places they are located in. So, I’m always taking details and elements from the country and integrating them into my designs.

And one thing that’s definitely important in India is the wedding. Women really spend time choosing things and it’s an experience which is intrinsically Indian.

At the wedding suite, we will be working closely with the bridal party or the trousseau designer. We’ll have a range of fabrics coming from France and Italy, and will work on specific ribbons and matching embroideries to create customisation. We will adapt shoes and bags very precisely to the colour and design of the bride’s clothes. If you’re in the luxury industry there’s a certain degree of service involved. You can’t say it’s luxury because it’s expensive. That’s not my sensibility. You approach and address the deepest desire of a woman — that’s luxury to me.

You’ve collaborated with designer Manish Malhotra in the past. Any other fashion tie-ups planned?

Yes, that’s why the Bandra presence is going to make it easier for me. I was supposed to work with Manish again but we couldn’t coordinate details. On the first show, we worked together quite closely, but it’s been difficult since. Now things will be more organised with an office at the Horniman Circle store and I’ll be able to work with more designers that I like.