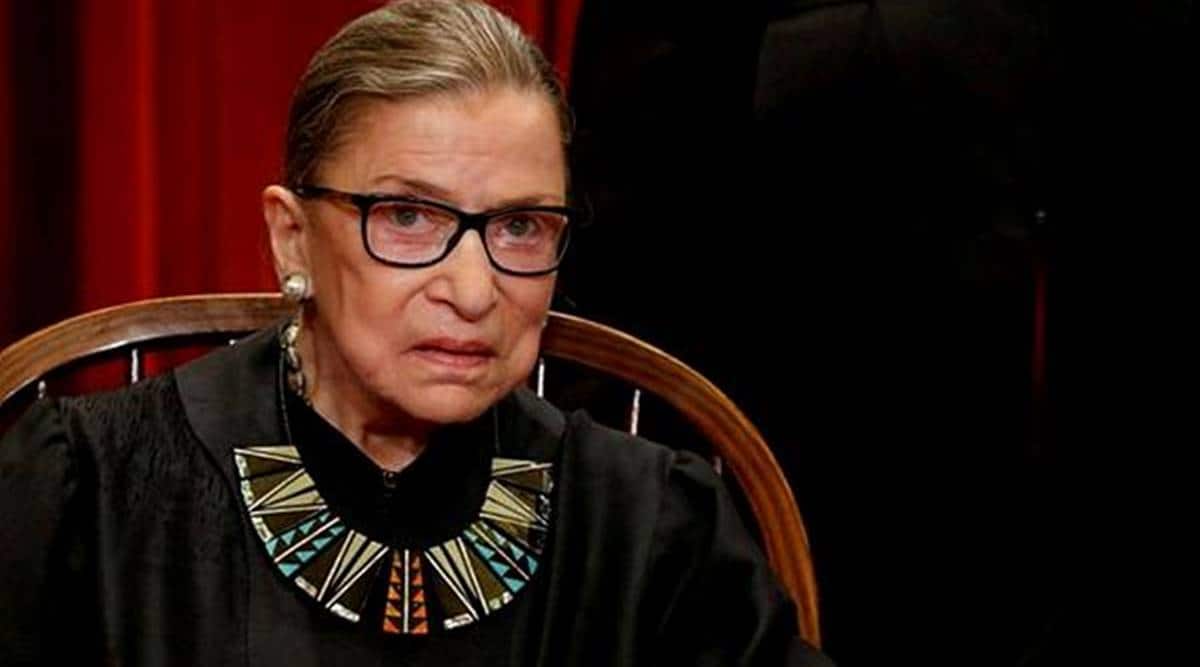 This is not the first time that the necklace was reintroduced in the market. In 2019, Banana Republic had re-released the 'Notorious Necklace', and donated a portion of the proceeds to the American Civil Liberties Union Women's Rights Project, which Ginsburg had founded in 2017. (Source: REUTERS/Jonathan Ernst/File)

In her 27 years of service, former US Supreme Court Justice Ruth Bader Ginsburg wore many statement neck-pieces to subtly express her approval or disapproval of the various policies and court decisions. Ginsburg — who died on September 18 following a long battle with cancer — left behind an inimitable legacy as the second ever female to have been appointed to the US Supreme Court.

In her lifetime, she fought for women’s rights and gender equality, and now to honour her, clothing retail company Banana Republic brought back a black and metallic bib necklace that she had worn on numerous occasions to show her ‘dissent’ and raise her voice against inequalities.

“Reissued from 2012, back again for a limited time. Make a statement with our Notorious Necklace,” the Instagram caption for the company, read.

The Notorious Necklace is officially sold out! Thank you all for the overwhelming love and positive support.

According to the New York Times, the Banana Republic necklace grew immensely popular after Ginsburg wore it upon receiving it as a gift for being named the ‘Glamour Magazine Woman of the Year’ in 2012. It later came to be known as the ‘dissenting collar’, when she had, in a 2014 interview, referred to the studded accessory as such, saying it “looks fitting for dissents”.

RBG: “This is my dissenting collar… It looks fitting for dissents.” pic.twitter.com/luNmrN4BCX

According to Insider, on October 2, Banana Republic reissued the collar, which it called the ‘Notorious Necklace’, as a nod to Ginsburg’s nickname ‘Notorious RBG’.

“Originally released in 2012, we’re reissuing this special necklace with its sparkling glass stones and a velvet tie… In our continued support of women’s equality worldwide, today through 12/31/20* (*while the supplies last) we will be donating 100% of the proceeds from the sale of this item to the International Center for Research on Women,” the product description on the website read.

But it is not the first time that the necklace was reintroduced in the market. In 2019, Banana Republic had re-released the ‘Notorious Necklace’, and donated a portion of the proceeds to the American Civil Liberties Union Women’s Rights Project, which Ginsburg had founded in 2017, the Insider reports.

In pics: How Ruth Bader Ginsburg’s offbeat style made her a fashion icon

In memory of Ginsburg, a white a lace jabot was placed on the ‘Fearless Girl’ statue in New York City last month, shortly after her death.