Oscars 2018 red carpet live updates and coverage, showcasing which celebrity is wearing what and whom? Will MeToo, Time’s Up and now Gun Control find sartorial representation at the 90th Academy Awards night? 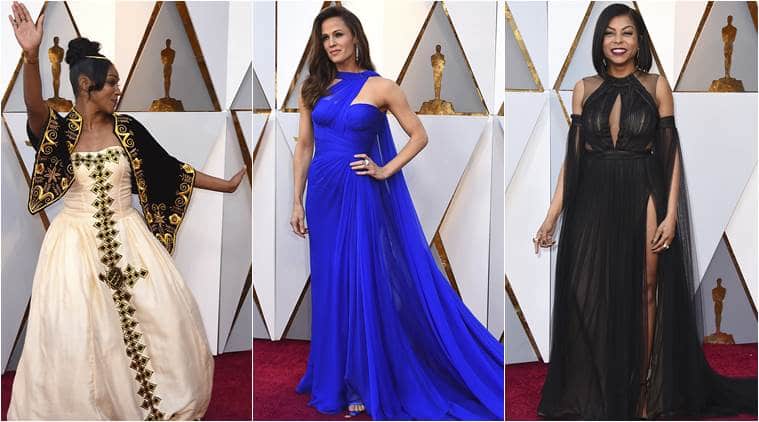 The 90th Academy Awards at The Dolby Theatre in Hollywood has started. Deemed as the holy grail of awards in cinematic excellence, and not only that, this is the one red carpet most designers aim to be seen at. Which also means that many of them are willing to experiment with nouveau ideas, while others opt to go for the classics.

This year, though, the red carpet is a lot more than just our favourite Hollywood stars twirling in the finest of designer wear. Awards season began with the film fraternity turning to fashion as a means of showing unity against sexual harassment by wearing black. This was followed by them sporting the Time’s Up pin and the music fraternity showing solidarity by pinning a white rose.

According to reports, though the leaders of the Time’s Up organisation had asked for the Oscar’s red carpet to not be politicised (though wearing of the pin will be appreciated), celebrities like Jane Fonda, Elisabeth Moss, Sam Rockwell and Shape of Water director Guillermo del Toro exhibited their support for the Time’s Up movement by sporting a pin. Host Jimmy Kimmel, who had said that in his material he will include a nod to both the Me Too and Time’s Up movements, roasted Harvey Weinstein in his speech.

With the ultimate red carpet now being converted from not just a glitzy fashionable affair to a socio-political battleground, here’s a look at what’s going down at The Dolby Theatre on Oscars night in Hollywood.

Updates from the red carpet.