The build-up to those precious moments on the Oscars red carpet often starts months in advance, and could even entail shortlisting as many as 60 dresses for an A-list star who will be going up on the stage. 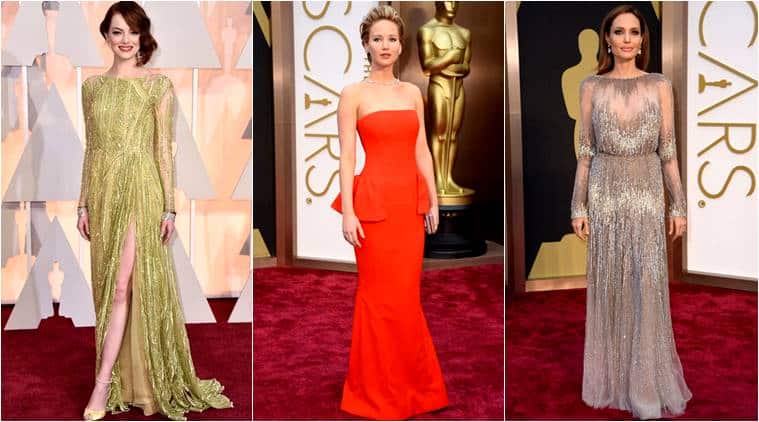 It’s not sure if stars would adhere to a fashion as a statement for the Oscars this year, as was the case during the Golden Globes and BAFTA. (Source: AP)

This is THE red carpet of all red carpet events for celebrities around the world. Though always in the spotlight and under pressure to look their best, the Oscars red carpet is the one that is everyone’s prime focus. Which is why it’s not surprising that for A-list actors, the process of choosing the right dress starts as early as the previous year. And the actual dressing up could last from 3 hours to up to 12, depending on how elaborate the ensemble is. Celebrity stylists Elizabeth Saltzman, Law Roach and Ilaria Urbinati told Vogue about the styling secrets and behind-the-scenes deals that form the spectacular Oscar red carpet moments that we all look forward to. Because even though all of it looks effortless and breezy as the stars smile, hug, pose and waltz into The Dolby Theatre in Hollywood amid hundreds (possibly thousands) of shutterbugs, there is a LOT of thought, work and business involved.

“With awards shows you usually have an idea that it’s not going to be just one, so you need to have a build-up situation,” Elizabeth Saltzman, stylist to Gwyneth Paltrow, Uma Thurman and Best Actress nominee Saoirse Ronan, tells the fashion magazine.

This year the message conveyed through fashion is more important than usual, after an all-black movement swept through the Golden Globes and then the British Academy Film and Television Awards in support of the Time’s Up and MeToo movements. Though reports suggest that this will not be the case at the Oscars, and the Time’s Up activists have said that just sporting a pin would be appreciated, it’ll be interesting to note how actors choose to carry the narrative of ‘fashion for rights’ forward at the Academy Awards on Sunday (March 4) night. Previously, designers such as Prabal Gurung, Christian Siriano and Naeem Khan were sent scrambling to remake dresses to fit the tone of the red carpets earlier this year.

The Choosing of the Dress

The process for Best Actress nominees could apparently have begun months ahead, around October, when the nominations were announced. Some have long-term understandings or contracts with designers, while others work on an ad hoc basis. Both designers and stylists would reach out to dress or be dressed for the occasion, and sometimes as many as 60 dresses could be pulled for an actor for an event like the Oscars at the first stage.

According to the report, Jennifer Lawrence has a $15 million-plus deal with Dior over three years, and Emma Stone has a two-year deal with Louis Vuitton worth $10 million, which means they would need to wear these labels at specific events during the tenure. These contracts also extend to accessories, especially jewellery.

For those choosing to go the customised route, the stylist like to play with new designs or even classic brands. But the fitting here is must, as is the message the outfit would convey. Roach, who is styling Zendaya and Mary J Blige, says that choosing something that doesn’t wrinkle easy is important. “After the red carpet we don’t care – you just need to get them to the carpet and get those pictures,” Roach told Vogue.

Many would remember Aishwarya Rai Bachchan in her Cinderella blue gown at last year’s Cannes film festival, and how she got out of a mini-van. Now, that’s not the most stylish car to choose for a celebrity, but here the dress dictates the car. “With Gwyneth (Paltrow) with the white cape dress (by Tom Ford in 2012, which has since then been hailed as one of the iconic ensembles on the red carpet) I had her lying way back so there would be no folds and then the cape was stretched out into the back of the SUV with two people holding it so it didn’t get crumpled. There are ways to sit or not sit to prevent creasing,” Saltzman said.

The dressing process could apparently take anything from 3 to 12 hours, and the rooms of the stars are always chock-a-block full with everyone from the managers to the stylists, hair and make-up people, those from the awards organisation and sometimes even security for the jewellery. At the end of the day, as we’ve seen in the case of Priyanka Chopra’s Met Gala dress, there is usually a before and after. All the drama and preparation and build-up are for that one walk across the red carpet; once that is done, it’s 90 per cent of the battle done. The rest is to survive sitting through the ceremony and after that… no one really cares. Except, probably, us scribes.

Credibility of shortlisted names for DDCA coaches’ course under scanner