Exploring a memory: Designer recreates a dress for Diana

Shocking pink with a plunging, ruffled neckline and body-hugging shape, the gown was designed by Emanuel for Lady Diana Spencer to wear at a Buckingham Palace party a few days before her marriage to Prince Charles in 1981 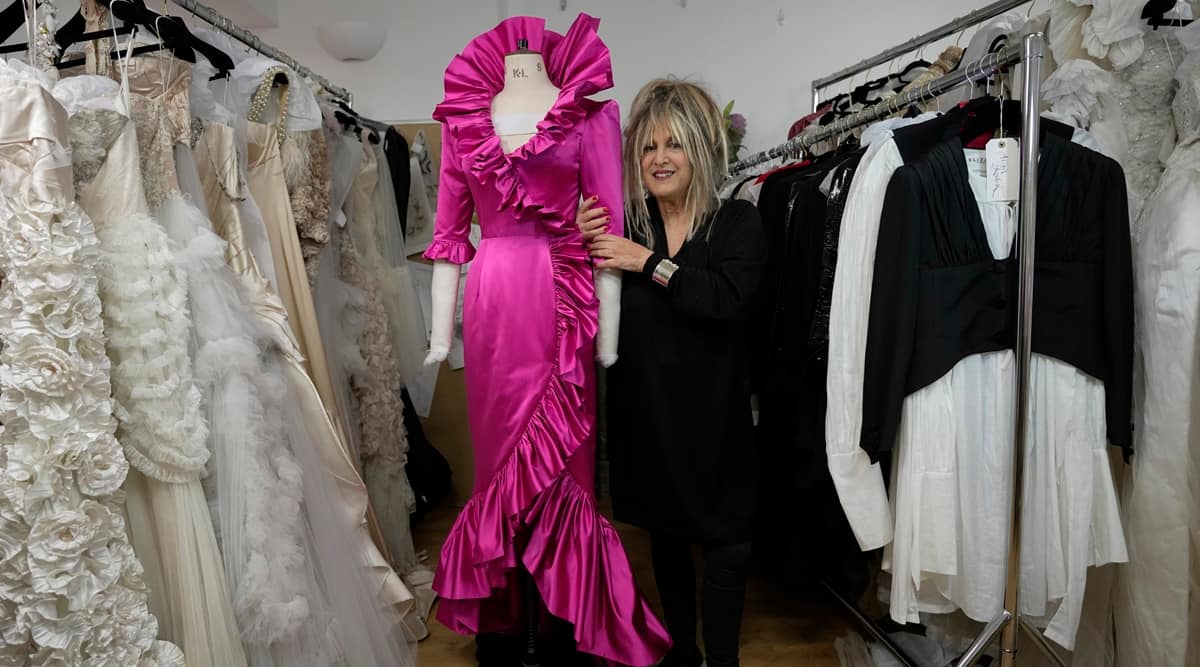 British designer Elizabeth Emanuel stands beside a replica of an evening gown she designed for the then Lady Diana Spencer to wear at a Buckingham Palace party a few days before her marriage to Prince Charles in 1981, in London. (AP Photo/Kin Cheung)

This is a dress with a story, and Elizabeth Emanuel wants to tell it.

Shocking pink with a plunging, ruffled neckline and body-hugging shape, the gown was designed by Emanuel for Lady Diana Spencer to wear at a Buckingham Palace party a few days before her marriage to Prince Charles in 1981.

It was a visual coming-out event for the future princess, until then largely known for her conservative sweater-and-pearls look.

“This was definitely not a wallflower dress,” said Emanuel, who also designed Diana’s wedding gown.

“This was a dress to be seen in and celebrated.” It was also soon forgotten. A sketch of an evening gown designed for the then Lady Diana Spencer by British designer Elizabeth Emanuel is displayed, in London. (AP Photo/Kin Cheung)

In an era before smartphones put a camera in everyone’s pocket and social media made private events public, the dress was mostly seen by the party guests, including Queen Elizabeth II, Princess Grace and Nancy Reagan, but no one else. Emanuel doesn’t know where it is, or even if it still exists.

So she has recreated it, out of bolts of shiny, satin taffeta cut and stitched to match the dramatic sketches she made more than 40 years ago.

Acting on an idea that took shape during Britain’s long coronavirus lockdowns, she did it for herself, for her archive. But also because she wanted to show another side of Diana, who Emanuel believes has been misrepresented by “The Crown,” the popular Netflix series that has brought the story of the princess and her ill-fated marriage to a new generation.

A fan of the series’ first three seasons, Emanuel said she found it hard to watch the last two because of the way Diana was depicted.

Creating a bespoke dress is a long process, requiring multiple fittings that give client and dressmaker lots of time to talk. And throughout the hours they spent together, Diana came across as a happy, vibrant young woman, not the shrinking girl “The Crown” portrays as being buffeted by events beyond her control, Emanuel said. British designer Elizabeth Emanuel shows the fabric used to make a replica of an evening gown she designed for the then Lady Diana Spencer to wear at a Buckingham Palace party. Emanuel recreated the dress for her own archive. (AP Photo/Kin Cheung)

“She was always very upbeat. And, you know, I like to feel that we were close enough that if she was having huge issues that we might have been aware of it at the time, because those fittings are fairly intimate.” One of the things the series does right is retrace Diana’s style journey, from the cardigans and bows she wore when she first stepped into the public eye, to frothy ballgowns with frills and flounces and finally to her becoming a global fashion icon in Versace, Dior and Chanel.

Diana grew up in the country, looking to her older sisters for fashion cues.

This was a world of hunting, shooting and fishing, where Barbour coats and Wellington boots were everyday wear. It was a culture where no matter how much you cared about your appearance, you had to seem like you weren’t trying too hard. 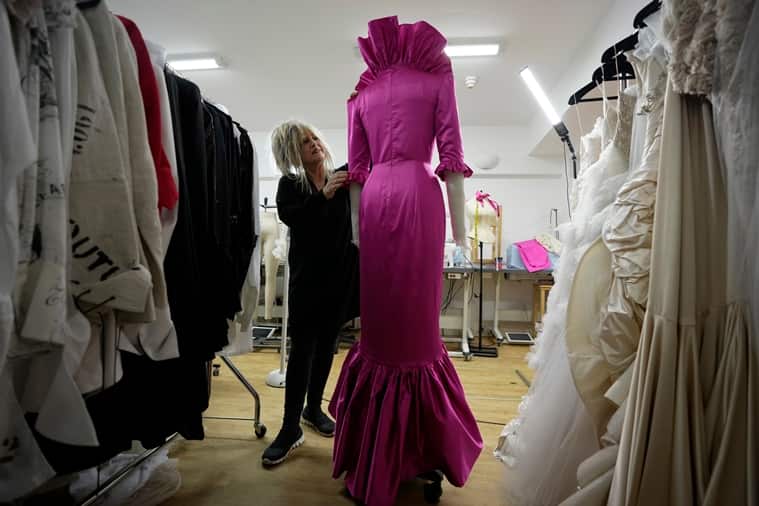 Emanuel recreated the dress for her own archive and to show another side of Diana, who Emanuel believes has been misrepresented by “The Crown,” the popular Netflix series that has brought the story of the princess and her ill-fated marriage to a new generation. (AP Photo/Kin Cheung)

Diana brought that style sense with her when she moved to London after leaving school and soon became the archetype of the Sloane Ranger, the media name for the wealthy young people who lived near London’s Sloane Square and cultivated the look of bohemian aristocrats.

She was, as former BBC royal reporter Michael Cole put it, “this Sloane Ranger with her sort of pie crust collars and Fair Isle sweaters and rather voluminous skirts. She was a product of the English countryside.” But after her engagement to the future King Charles III, she began to grow into the glamour of being a princess.

“It actually was a bit of an effort for her to adapt to that role,” Cole said. “She did appreciate and came to understand the power of clothes, the power of image. It helped very much that she had good taste, and I think she had some good advisers.” In other words, she evolved and learned how to use clothes to project a message.

And perhaps the journey began with the hot pink party gown.

After losing weight, Diana asked Emanuel, her former husband David, and their team to create a dress that would show off her new supermodel figure and transform her image for the celebrities and world leaders invited to the palace. British designer Elizabeth Emanuel stands beside a replica of an evening gown she designed for the then Lady Diana Spencer. (AP Photo/Kin Cheung)

“She wanted something really spectacular and eye-catching to wear for that because the whole world was going to be there at that party,” Emanuel said at her London studio.

“I think there was a message being sent with this dress, really. That she’d been previously known as Shy Di, but in this dress she definitely was no longer a Shy Di.” But for Emanuel, the project is about more than simply setting the record straight. It’s about one friend remembering another and the helping hand the princess gave to her career.

There is something touching about the way she looks at this copy and adjusts it on a mannequin roughly as tall as Diana, plainly remembering her famous client.

She recreated a dress that belonged to the Diana she knew, who broke the mold, who was brave, who was ready to walk out on stage. And as she worked, Diana was in her head the whole time.

“As I’m looking at it, I’m imagining her face,” Emanuel said.

“The last time that we saw her in the dress was actually at that party and looking so radiant and fantastic. And then all these years later, you know, to recreate it again, it’s kind of strange.” But that won’t stop her from continuing to explore her memories. She embraced the process of making the dress, of holding a memory in her hand.

Emanuel now has plans to recreate the alternative wedding dress she made for Diana — a spare created in case the tabloids somehow managed to get a photo of the primary dress before the big day. But the dress never leaked, and the spare disappeared from public view.

“I want to see if I can do it right and to delve into all of those memories,” she said.

“I will have them. They’ll be there. They won’t just be figments of imagination or floating around digitally. They’ll be real things that I can remember.”