Get the look: Distorted reality version

The symbolism is proliferating at fashion week: Dior’s models-as-chess-pieces; Saint Laurent’s damp catwalk and finale downpour. Some choices generate more head-scratching than others; some seem more relevant. Owens’ “Fogachine” was a doozy 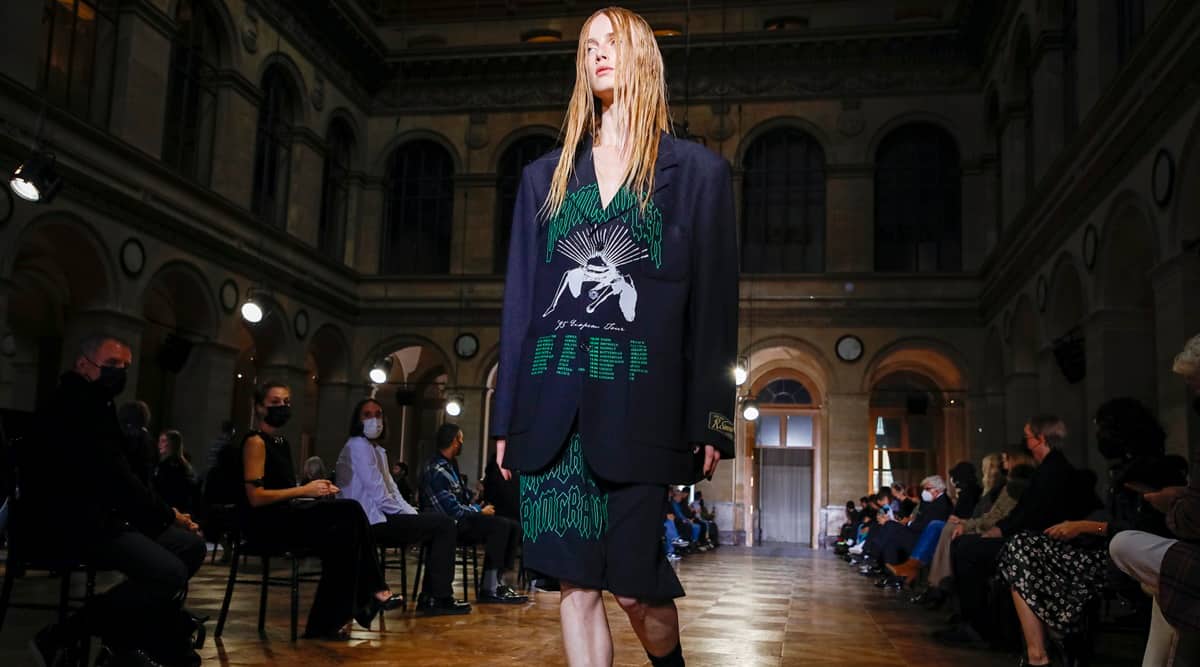 The thick, white fog rolled across the plaza of the Musée d’Art Moderne on a gorgeous sunny day like a scrim of cotton wadding, fuzzing the view, making it hard to see what was coming next. It was the Rick Owens show, but the clouding of reality seemed awfully familiar.

The symbolism is proliferating at fashion week: Dior’s models-as-chess-pieces; Saint Laurent’s damp catwalk and finale downpour. Some choices generate more head-scratching than others; some seem more relevant. Owens’ “Fogachine” was a doozy.

For all the talk of sex! and partying! being the way forward, the general mood at the water cooler or along the runway is ambivalence: Are we truly so happy to be back — in the office, at a show — doing the same old, same old? Is that what we want? And if it isn’t (because: no, not entirely, or at least not exactly yes), what is?

The yin and the yang of reentry is being wrestled with in real time on the runways. It’s a more nuanced and complicated way of reflecting what’s going on than just shortening skirts and showing a bra top or the silly ’50s housewives-on-a-pill-popping-bender lingerie looks at Rokh, and it’s producing some much more interesting clothes. “I spent the lockdown in a position of ferocious defiance,” said Owens, whose earlier pandemic shows, held on empty beaches in Venice, were effective shouts of beauty into the void. “And it seemed a little silly now to pull back on that and get all sensitive. But we have to be a little responsible, don’t we? So I’m trying to be both.”

Hence the duality of the collection, which veered from the grand, aggressive shoulders he has made his own to the sort of graceful bias drapery that evoked Grecian statuary and old Hollywood; from the jutting insectoid angles of leather appendages to the ovoid curves of a pintucked silk sweatshirt; and from weaponized platform boots cut to evoke surgical pins to layers of cobwebbed knits, speckled provocatively with holes like little gaping mouths just waiting for something to latch onto.

Hence two women, all in black, were perched on the museum roof and, like witchy flower girls, scattered dried jasmine petals from Owens’ garden in Venice down on the show in memory of the past year. And hence the fog, with its layers of associations — mystery, nature, ritual, disco! — belched out by assorted little black machines sourced in Germany.

They weren’t just a show trick, however. Owens is doing a collaboration with the manufacturer and will be selling the fog-makers in three sizes (wearables for the wrist and ankle, plus a coffee table option) as part of his collection. You can have your fog and take it with you, too.

They will probably sell out.

Raf Simons, meanwhile, was blurring all the lines between suits and T-shirts; treating proper gray and black Wall Street-ready tailoring like band merch and splashing it with invented silk-screened logos for different groups — goth, metal, techno — in an inversion that was as much about the increasingly clichéd nature of streetwear as the increasingly confused discussion of the office dress code, and who gets to say what “appropriate” clothes mean.

To that end he was also, like many designers, erasing the difference between menswear and womenswear, so all models of whatever gender wear the same skirts or shirts or sweaters or giant oversize shirting. The button-downs came complete with labels in old-fashioned cursive script, placed visibly at the base of the neck or at the wrist, and little skeletal metal hands-cum-bracelets (first introduced last season) gripping the biceps, like a spooky harbinger of old ideas around work and the future finally coming to an end.

It all made Gabriela Hearst’s Chloé show — held on the banks of the Seine and her first with an audience since being named designer late last year — rare in its sunshiny clarity. Hearst is one of the few designers still overtly talking about sustainability, and Chloé is in the process of being certified as a B Corp (with verified social and environmental achievements); the designer also has said she is determined to use the brand as a platform to elevate the work of the hand.

As a result, her focus is less on silhouette or shape than texture (“I’m trying to make texture a brand signature,” she said during a preview), meaning lots of smocks and caftans, drop-waist dresses and loose linen tailoring. Also a new label, Chloé Craft, signposting the kind of garments, like a dress covered in hand-knotted silk streamers or one composed of multicolored scallops mosaic’d together with macramé, that look deceptively simple but are impossible to make via machine.

They weren’t flashy, but they had value, and were a quiet reminder — like Owens’ fog and Simons’ switcheroos — of how distorted our world has become. 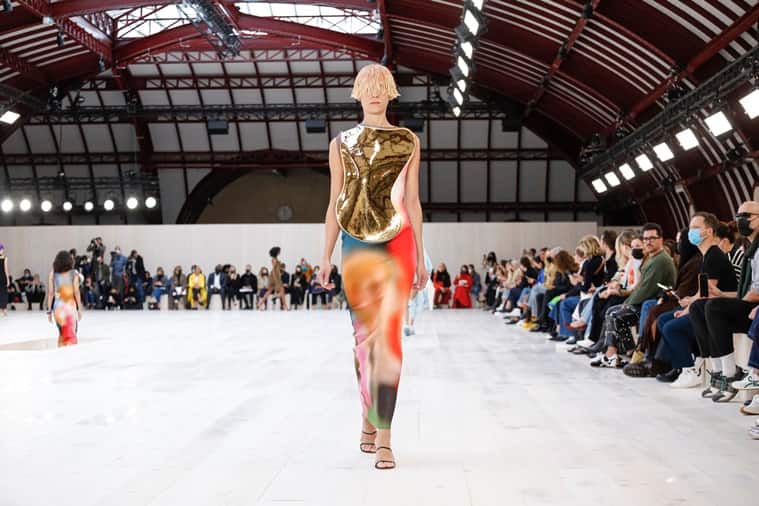 For anyone who doesn’t see it, simply consider Jonathan Anderson’s Loewe, where classicism and establishment expectations were subverted, stretched this way and that, and otherwise punctured. Literally.

Long columns of jersey were pulled over wire structures, creating geometric disturbances in the line and torquing the body into a pointy new shape. Hammered gold breast plates were inset on dip-dyed ribbed cotton and back-to-front trench dresses, and then squished into asymmetry, listing off to one side. Heraldic chiffon drapery topped trousers in faded denim blue. Sequined slip dresses had a cancan dancer’s ruffle that framed not a slit but an actual hole in the garment, as if the wearer’s leg had ripped through.

It was exuberant and uncomfortable in equal measure. “Neurotic, psychedelic, completely hysterical” is how Anderson put it in his show notes. Well, duh. Welcome to now.