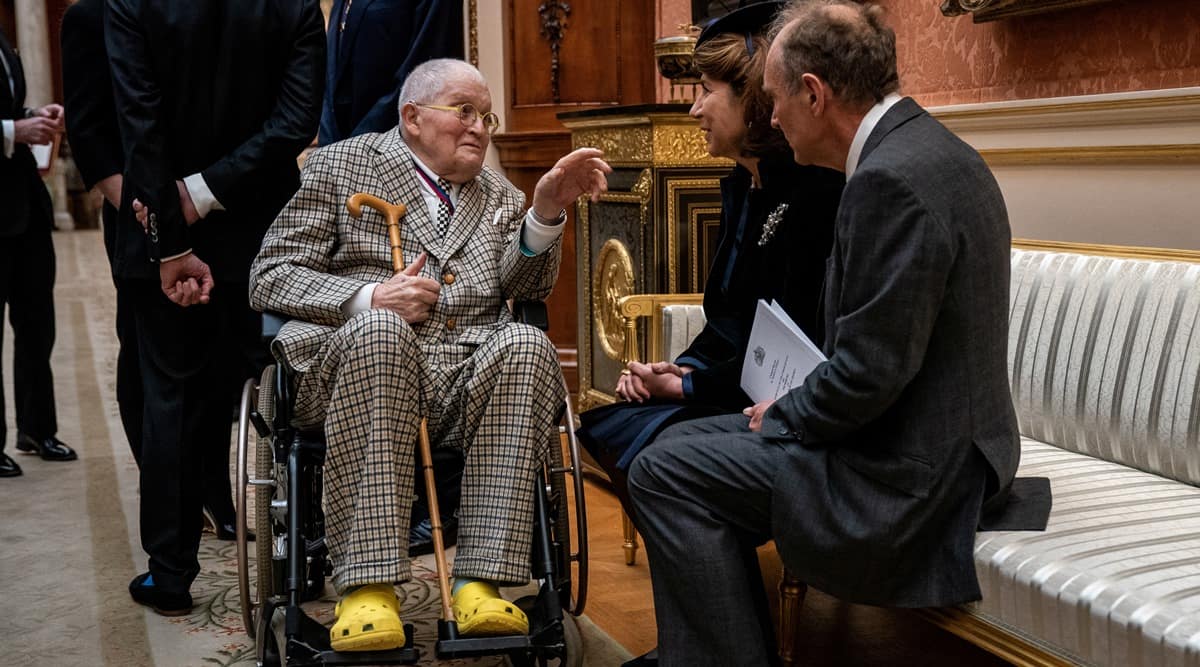 Mr David Hockney during a luncheon for Members of the Order of Merit at Buckingham Palace, London (Source: Reuters)

King Charles recently hosted a lunch event for the members of the Order of the Merit which is a special distinction “given to such persons, subject of Our Crown, as may have rendered exceptionally meritorious service in Our Crown Services or towards the advancement of the Arts, Learning, Literature, and Science or such other exceptional service as we are fit to recognise”, as per the royal family. One of the attendees who grabbed everyone’s attention at the luncheon, including that of the monarch, was celebrated British artist David Hockney who opted for a rather unusual sartorial pick.

The 85-year-old artist dressed up for the formal event in a striking plaid suit worn over a white shirt and complete with a checkerboard tie. But, it was his bright yellow Crocs, matching with his yellow glasses, that added an experimental appeal to his look, adding a splash of colour to not just his ensemble but also to a sea of black lace-ups at Buckingham Palace. King Charles III talks with Mr David Hockney during a luncheon for Members of the Order of Merit at Buckingham Palace (Source: Reuters)

Reportedly, the dress code for such events is mostly formal but the King tweaked it for Hockney who used a wheelchair to attend the annual event. He not just approved the artist’s footwear choice but also seems to have taken a liking to it. When King Charles met Hockney, who insisted on standing for the King, he complimented by saying, “Your yellow galoshes! Beautifully chosen.”

The King, on the other hand, wore formal attire for the occasion – a navy suit, dusky pink tie featuring a white diamond pattern and pair of Oxfords. Other attendees included the likes of Sir David Attenborough, Baroness Floella Benjamin, Sir Tom Stoppard and Sir David Adjaye, among others. The Order is restricted to 24 members as well as additional foreign recipients (Source: AP)

The Order of Merit was founded by King Edward VII on June 23, 1902. Field Marshal Lord Roberts (1902) was among the first to receive this award. According to royal.uk, the Order is restricted to 24 members as well as additional foreign recipients. “As with the Royal Victorian Order, the Order of Merit is the sole gift of the Sovereign but carries no rank apart from the initials ‘OM’ after the name. The Order has only one class: members of divided into military and civil divisions,” it noted.

In November 2022, The King made six new appointments to the Order of Merit. The individuals were chosen by Queen Elizabeth in early September, before her demise on September 8.