Clemens is a Liberian American designer who founded his own company in 2004 with the motto “Not for you, for everyone.” He was creating deconstructed unisex basics aimed at subcultures long rejected or neglected by the establishment fashion world 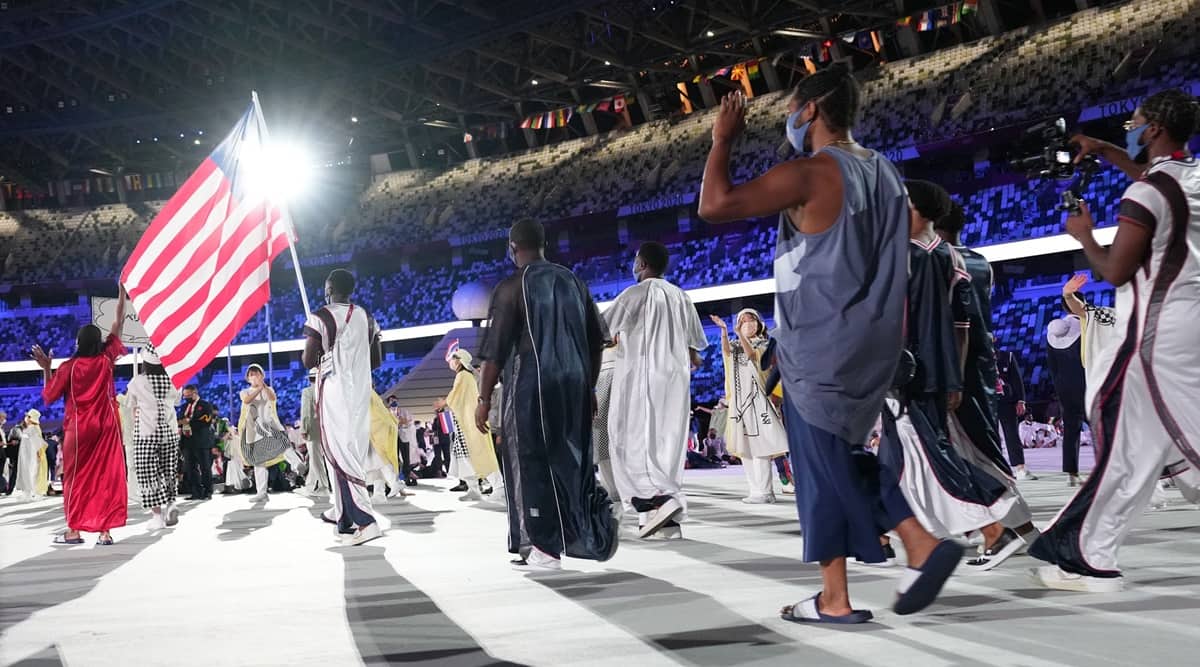 The Olympics are many things: a mythic sporting event, an emotional outlet, a tool for soft politics. And, of course, an enormous branding and marketing opportunity.

According to estimates from the International Olympic Committee, more than half the world’s population watched the 2016 Olympics in Rio de Janeiro in one way or another: There were 356,924 hours of coverage on 584 TV channels and 270 digital platforms. That’s a lot of consumer eyeballs. Little wonder brands like Airbnb, Coca-Cola and Intel are willing to pay hundreds of millions of dollars to be official sponsors.

Each country also has sponsors and these often include fashion brands: designers and sports brands that dress the Olympians for their major public moments and then get to sell versions of those clothes to anyone who wants to buy into the idea, no matter how romantically impossible, that they, too, can acquire a small piece of sporting success.

Historically, the countries with the best, most buzzed-about looks have also been the countries with the most famous fashion industries: Italy (where Armani has created opening ceremony looks since 2012), France (Lacoste since 2016), Britain (Ben Sherman, after Stella McCartney between 2012-16) and the United States (Ralph Lauren since 2008). Designers use the relationship to burnish their patriotic credentials and suggest the breadth of a national talent pool; teams use it to raise the profiles and confidence of their athletes.

Still, the risk-taking tends to be left to athletic feats; formal Olympian wardrobes are often very traditional, or even boring; they generally resemble the sort of outfits a golf pro might wear in a fantasy country club. They are rarely “cool” — and rarely available to smaller countries with less promotional muscle.

But this year Liberia changed that narrative.

Liberia, a country in West Africa with a population of about 5 million, is one of the poorest in the world — yet it has fielded a Summer Olympic team almost every year since 1956. It has never, however, won an Olympic medal, and has had to scrounge for sponsorships before almost every Games.

Until now. That’s where Telfar Clemens comes in.

Clemens is a Liberian American designer who founded his own company in 2004 with the motto “Not for you, for everyone.” He was creating deconstructed unisex basics aimed at subcultures long rejected or neglected by the establishment fashion world long before diversity was an imperative and gender fluidity a movement, and has always been more interested in building a modern community than catering to the status quo. His popular handbags, called “the Bushwick Birkin,” have become passports to this new world. Even before arriving in Tokyo, the Liberian Olympic team was already winning. How did they come out on top? Ask designer Telfar Clemens. (Valerio Mezzanotti/The New York Times)

In fact, it was the handbags that caught the eye of Emmanuel Matadi, a sprinter who has been part of the Liberian Olympic team since 2016. His girlfriend followed Clemens’ Telfar label on Instagram, and once Matadi realized there was an increasingly famous designer who was actually Liberian, he suggested that Kouty Mawenh, Liberia’s Olympic attaché, see if Clemens, whose design studio is in Brooklyn, might be interested in working with them.

Mawenh had represented Liberia in the 1996 and 2000 Olympics, and he has made it his mission to try to build up the team. But it’s hard to persuade athletes to run for a country that isn’t really able to support them by creating the sort of eye-catching moments that can lead to wider recognition and success — and it’s hard to get sponsors interested if the team itself doesn’t have famous athletes already committed.

Liberia, which is fielding three athletes at the Tokyo Olympics — Joseph Fahnbulleh, the NCAA champion in the 200-meter dash; Matadi, currently ranked 23rd in the world in the 200 and 25th in the 100; and hurdler Ebony Morrison — had not had an official sponsor since 2000, when New Balance bowed out. Instead, if an athlete qualified for the Olympics, a brand might help out with shoes here, or a singlet there.

Mawenh agreed Telfar might be able to help, so they got in touch via an email — which Clemens received when he was on a trip back to Liberia for the first time since he was 5. He, his parents and four brothers had emigrated to the United States in 1990 during the Liberian civil war.

“I had been talking about going for so long, and I was finally there, and it was mind-blowing,” Clemens said. “And then this happened.”

Mawenh said, “As soon as I heard he was Liberian, I felt he was my brother.”

As it happened, Clemens and his business partner and creative director, Babak Radboy, had been thinking about expanding into athletic wear, though done their way, with a very specific definition of “performance.” This was the perfect opportunity. They agreed to outfit the whole team, and pay for their travel and meals. It is the biggest investment the company has ever made, but it was worth it because for both Clemens and the Liberian team, this was about much more than a mutually advantageous marketing exercise.

“It’s meaningful to me on a lot of levels,” Clemens said. It turned out that one of the runners is a distant cousin, and the team doctor was a childhood friend of one of his older brothers. His history is their history.

They were so interconnected, he was invited to go to Tokyo with the team, a pretty much unheard-of addition to the delegation. But as far as they were concerned, he was an athlete, too.

In only four months Telfar made approximately 70 pieces, working remotely with factories in China, Portugal, Vietnam and Italy. The clothes are the designer’s signature pieces, filtered through a prism of the questions Clemens posed: “What is Liberian fashion? It’s not just putting kente print on a tank top. What does nationality even mean?”

Walking around Liberia, Clemens said, “I realized the clothes of the place I am from and the clothes I am making are already the same thing.” According to Ayodeji Olukoju’s 2006 book “Culture and Customs of Liberia,” many of the country’s youth wear secondhand clothing from the Western world, and Clemens said as far as he could tell from his visit, that had not changed. The off-center proportions and customizations are echoed in his own work.

The Olympics pieces are made to be worn by both men and women. They include, for example, the “three hole top” of the opening ceremony: a silk and mesh basketball jersey-turned-royal-tunic, stretched down to brush the knees or even the ankles, and dropped off each shoulder, like an evening gown, worn with shorts that have been turned into matching wide-legged palazzo pants. Then there is the “half tank,” a tank top with the straps pulled suggestively to one side to create an asymmetric shoulder-baring line, which has been incorporated into a unitard and running compression top, and the “what!” shorts, which are essentially compression booty shorts.

Like his bags and his clothes, every piece will be offered via drops through Telfar’s platforms during the Games, but they will not be available through any other retail outlets. And they will be “evergreen,” Clemens said. “These are clothes we want to sell for the rest of our lives.” His goal is to establish himself as on par with Nike and Reebok: in the same space, but different.

Even though Mawenh had given him free rein to make what he wanted, Clemens wasn’t sure how the athletes would react. (“They don’t look like anything that exists,” said Clemens of his pieces. “I want to open up the conversation about what sport and competition and performance really means.”) The athletes got their first look at the new gear the weekend before they flew to the Games, when Clemens hosted a fitting and dinner in New York (his aunt cooked Liberian food). It was a test that turned into something of a pre-Games psych party.

Aside from some basic alterations — “We didn’t see the thighs coming,” Radboy said of the runners’ muscular legs, and the need to adjust the corresponding dimensions — the team was grooving with what they saw.

“I didn’t know what to expect,” Matadi said. “First I thought, ‘This looks a little crazy.’” When he tried the collection on, though, he decided it was exactly what he and the rest of the team needed. “It’s definitely going to be talked about,” he said.

When Fahnbulleh first saw the “three hole pants” — pants that look like track shorts and are attached via a single point at the front and back of the midthigh to cover the lower legs and play peekaboo at the sides — he said, “I’ll never wear that.”

Clemens responded, “How do you know what you’ll wear if you’ve never worn them?”

Fahnbulleh agreed to test them out. Then he wouldn’t take them off. “It’s forward looking,” Mawenh said.

He did a little of that himself, marching, as a designer, with Liberia in the opening ceremony — the equivalent of the biggest runway show he has ever held. His family in both Liberia and the United States were watching.

Matadi said for the first time he felt as if the Liberian team was getting what the American team and the Canadian team had always had simply as a matter of course. The Telfar-designed Olympic kit gives them “a psychological boost: If you feel like you look good, you perform well,” he said.

Not having had that boost before, Matadi added, it’s particularly meaningful. “We are really proud,” he said.

Mawenh said: “We’ve always had elite athletes, but they have never felt important. Now they feel important.” Even beyond that, he added, he believes the Telfar clothes will have broader national and international repercussions.

“I want people to see this and say, ‘Oh, that’s Liberia,’” Mawenh said. “To identify with it, even after the Games are over, so it’s not just about the war.” For too long, he said, the Liberian narrative has been connected to the past: the civil strife and its aftermath. But, he said: “War is not what Liberia is about any more. My goal in all of this is to change perception.”

Muktsar leader quits Cong, says it is hand-in-glove with Akalis