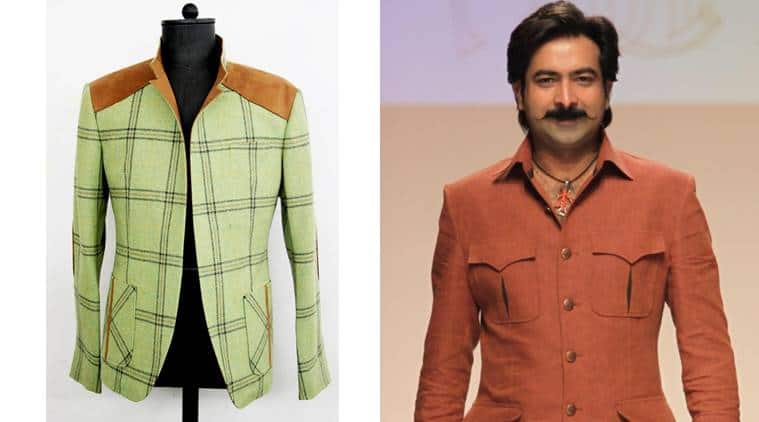 (left) One of the designs that will be showcased at the AIFW A/W’16 in March; and the designer himself.

When it comes to the person responsible for the revival of Jodhpur jackets and breeches on the Indian fashion scene, designer Rohit Kamra’s name is usually the first to crop up. After a remarkable journey of more than 11 years in the menswear fashion industry, 43-year-old Kamra is all set for his debut in the upcoming Fashion Design Council of India (FDCI) Amazon India Fashion Week (AIFW) Autumn/Winter’16 with a specially curated menswear show.

“This was something in my mind for years and I always used to discuss this with Suni Sethi (president, FDCI),” says an excited Kamra, who started his career by designing uniforms for Scindia’s Hotel (Usha Kiran Palace) staff in 2005, adding, “I am glad it’s happening now and moreover it feels great to be among pioneering figures to start the trend.”

With no formal training in fashion designing, Kamra (a BCom graduate) followed his natural extinct that helped him create a label which led to the revival of royal Indian menswear in Indian fashion. “After a couple of projects for (the) royal families in Rajasthan, I thought of stepping into the core fashion market and I started attending fashion shows and weeks. What I saw was not pleasant, so I thought of exploring my own designing sensibilities,” says the designer. Rohit used to partner with his designer brother Abhishek under the label Rohit and Abhishek, but he has now set off on his own.

He started off with self-experimentation to hone his designing aesthetics and skills. The clothes he designed for himself got him much attention within no time. Revelling in people’s appreciation, the businessman-turned-designer decided to stick to menswear. For Kamra, who hails from Punjab, Jaipur holds a special space in his life, “I have been living in this city for past 25 years and was always fascinated by royal Indian menswear. My label is a way of paying gratitude to the city that gave me so much in terms of art aesthetics and designing inspirations.”

Through this show, Kamra — known for his modern maharaja dressing style — will redefine the royal look by modernising sharply tailored bandhgalas and breeches. His collection ‘Made in Jaypore’ is scheduled to be showcased on the fourth day of the AIFW A/W’16 in Delhi, and will see a huge Jaypore influence in the ensembles. “All my collections have a deep-rooted link with Indian tradition and, of course, Rajasthan, and this is not an exception.”

The 16-look men’s collection will include a seamless amalgamation of sherwanis with trench coats, bandhgala jackets with trendy comfortable trousers, along with the designer’s signature modern maharaja range, which includes Jodhpur jackets and breeches, as well as waistcoats and Nehru jackets. The preferred material is flannel, wool, silk wool, silk and cotton, and the garments have been submerged in geometrical motifs cut into contemporary and masculine silhouettes in shades of white, black and grey, with highlights of blue and green.

Going forward, the designer believes his showcase at the AIFW will definitely give a boost to the designer-menswear market. “Now that the trend has started, I feel this will help aspiring designers to opt for menswear as a career line and FDCI might include more shows dedicated to menswear depending on the market response. It is for all good reason, and it’s time to give it a big push,” says Kamra.

Fukushima ground zero: No place for either man or robot