The onus of ensuring that our footprint is minimised and the negative impact on the environment and ecology of the region is reduced lies with the travellers. 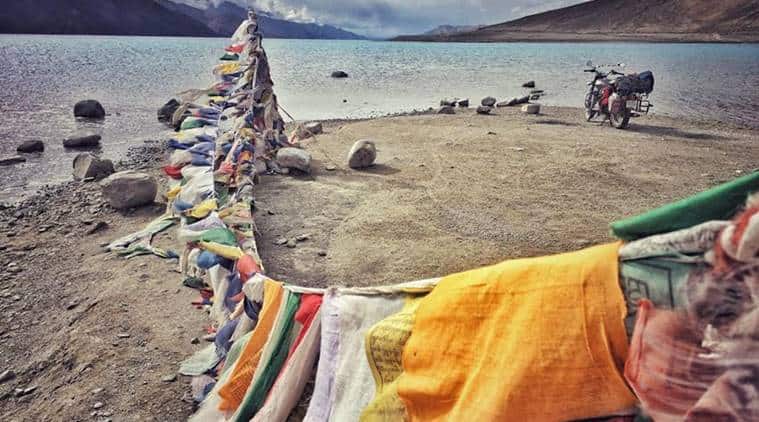 A view of Ladakh landscape. Express photo by Abhimanyu Chakravorty

Over the past decade, Leh-Ladakh has evolved into one of the most popular travel destinations for Indian tourists, attracting thousands of backpackers, bikers, trekkers from different walks of life and diverse age groups. The picturesque landscape of Leh-Ladakh and its high motorable passes have opened a box of adventures for many, converting it into an achievable bucket list item for many in their youth.

This sudden boost in tourist activity has brought out the economy of this Himalayan region out of a slumber, providing numerous work opportunities for the locals. However, there is also a downside to it. The Himalayan terrain, which is considered to be extremely fragile, now faces pressure of increased human activity and the subsequent changes to support this.

While the environmental aspect is quite apparent, many claim that it is impacting the lives of Ladakhis in ways beyond that. Vinod Sreedhar, founder of environmental conservation organisation and eco tour agency Journeys with Meaning, says, “While they are earning more, there has also been a huge increase in the amount of waste generated. This non-biodegradable waste builds up massively, and since there are either no or limited options available for recycling this waste, it just stays there leaching toxins into the groundwater and water sources. Another issue is the loss of traditional earth-friendly practices that are constantly being replaced by urban practices that are not suitable for the these regions and their ecosystems.”

The onus of ensuring that our footprint is minimised and the negative impact on the environment and ecology of the region is reduced lies with the travellers. There are a number of ways that it can be done. Let’s list out a few easy ones:

First and most important, do not litter!

Yes, the biggest issue tourists tend to bring with them is the waste they produce, especially plastic. Local gurest house owners and travel guides have complaint that a number of tourists usually leave all their waste scattered near popular travel destinations which is a cause of concern. “Some places are clearly being spoilt by tourism alone, for example, the areas around the lakes that are popular with tourists. Those lakes are heavily affected by blown trash, and more importantly nitrogen-rich effluent seeping through the ground from all the flush toilets installed to serve tourists,” says Rebecca Norman, volunteer coordinator at the Students’ Educational and Cultural Movement of Ladakh.

The mention of flush toilets brings us to our next point.

Ladakh is a high-altitude desert region and water is a precious and scarce resource for the locals. The Ladakhi people are accustomed to using compost toilets, which conserves water. Tourists, however, prefer flush toilets which not only lead to wastage of water in large quantities but also produces a nitrogen-rich waste.

“Earlier, when only the foreign tourists used to visit Ladakh, they would adopt our ways of living. But the local tourists demand luxurious facilities like good rooms, attached toilets and constant water supply,” says Disket L, a guest house owner in Leh.

Homestay is always a better option

With the growing business opportunities, most of the locals in Leh-Ladakh are now opting to construct new guest houses and hotels or reconstruct their own houses to adopt to the needs of tourists. This means treading away from building houses by commonly used materials like wood and choosing concrete and bricks instead.

Every year, a number of new guest houses and hotels pop up in Leh region. The locals, with help of outside investors, have also begun large projects like better and more luxurious hotels. This only means an excessive burden on this area. The perils of uncontrolled and unregulated construction activities are not unknown.

Another way of reducing our carbon footprint is by choosing to travel by train instead of flying. This may be time consuming but it comes with an added advantage of the opportunity to enjoy the scenic beauty. The Himachal Road Transport Corporation (HRTC) runs a bus service from ISBT in Delhi to Leh and it costs only a little more than 1,300 bucks. Thinlas Chorol, founder of Ladakhi Women’s Travel Company, says ‘there has been a sudden rise in the number of vehicles plying on roads in Ladakh. This means an increase in pollution’.

“Although, there was a good snowfall this year, in last three-four years, it did not snow that much. This impacts the farmers who grow local crops here. We used to grow apricots in low-lying areas but that has also been impacted in last few years,” she adds.

These changes happening in the Leh-Ladakh region may not seem too big to the tourists and the locals might condone it because of the economic benefits. However, continuing in the same manner, tourism might have too high a cost in Ladakh. “The impacts of unsustainable tourism will first show up as increased pollution, waste, noise, loss of traditional sustainable practices, etc. Then it will be the turn of the economy, as people wouldn’t want to spend their holidays in dirty polluted places. Tourists will start moving to other places that will then be seen as offbeat and beautiful,” said Vinod.

There are several travel organisations and NGOs which are working to promote sustainable tourism in Ladakh. There are for sure bigger and better initiatives and government regulations needed to ensure conservation of Ladakhi environment and ecology. However, small steps like these can also add up to create a huge difference.