The cruise industry stages a comeback

The industry faces a long road back to normal 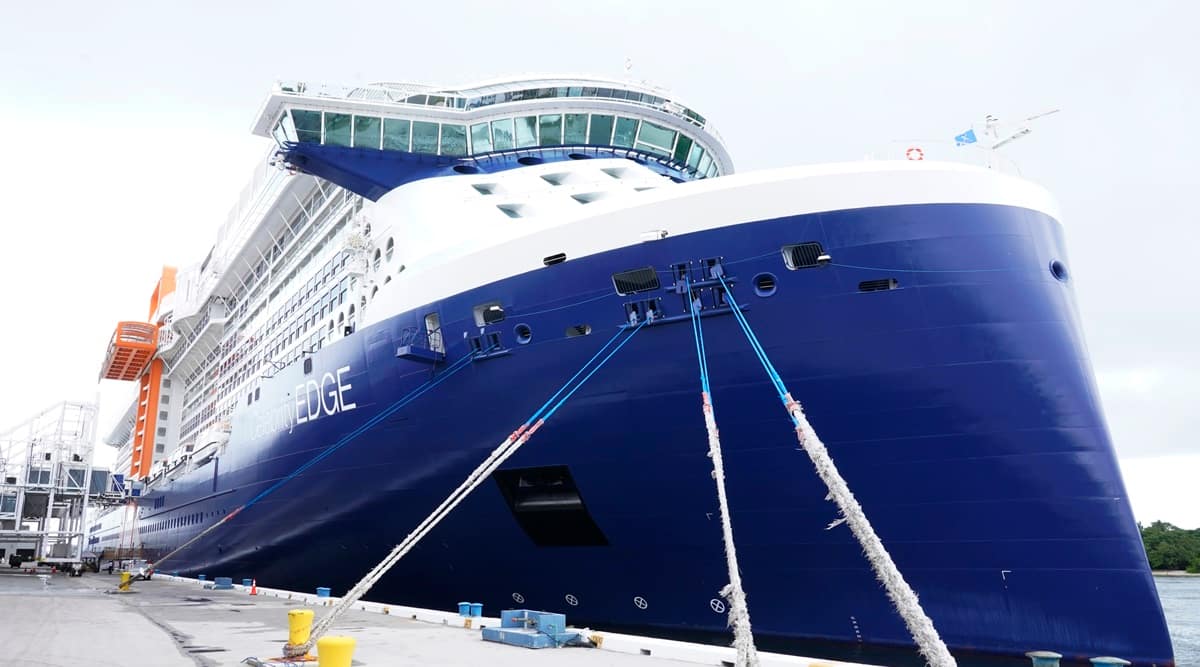 That optimism is fueled by what may be the industry’s best asset: an unshakably loyal customer base. (Representational: AP)

Nothing quite demonstrated the horrors of the coronavirus contagion in the early stages of the pandemic like the major outbreaks onboard cruise ships, when vacation selfies and videos abruptly turned into grim journals of endless days spent confined to cabins as the virus raged through the behemoth vessels, eventually infecting thousands of people, and killing more than 100.

Passengers on the Diamond Princess and Grand Princess, two of the worst-hit ships, were forced to quarantine inside their small staterooms — some without windows — as infections on board spiraled out of control. Every day anxiety and fear mounted as the captains of the ships announced new cases, which continued to spread rapidly through ventilation systems and among crew members, who slept in shared quarters and worked tirelessly throughout the day to deliver food to guests.

At the time, it was difficult to imagine how the ships, which carry millions of passengers around the world each year, would be able to sail safely again. Even after the vaccination rollout gained momentum in the United States in April, allowing most travel sectors to restart operations, cruise ships remained docked in ports, costing the industry billions of dollars in losses each month.

Together, Carnival, the world’s largest cruise company, and the two other biggest cruise operators, Royal Caribbean and Norwegian Cruise Line, lost nearly $900 million each month during the pandemic, according to Moody’s, the credit rating agency. The industry carried 80% fewer passengers last year compared to 2019, according to the Cruise Lines International Association, a trade group. Third-quarter revenues for Carnival showed a year-to-year decline of 99.5% — to $31 million in 2020, down from $6.5 billion in 2019.

And yet in June, Richard D. Fain, chairman and chief executive of Royal Caribbean Cruises, was beaming with excitement as he sat sipping his morning coffee onboard Celebrity Edge, which became the first major cruise ship to restart U.S. operations, with a sailing out of Fort Lauderdale, Florida.

“At the beginning we didn’t have testing capabilities, treatments, vaccines or a real understanding of how the virus spread, so we were forced to shut down because we didn’t know how to prevent it,” Fain said.

Several epidemiologists questioned whether cruise ships, with their high capacities, close quarters and forced physical proximity, could restart during the pandemic, or whether they would be able to win back the trust of travelers traumatized from the initial outbreaks.

Now, said Fain, the opposite has proved true. “The ship environment is no longer a disadvantage, it’s an advantage because unlike anywhere else, we are able to control our environment, which eliminates the risks of a big outbreak.”

Cruise companies restarted operations in Europe and Asia late last year, and, after months of preparations to meet stringent health and safety guidelines set by the Centers for Disease Control and Prevention, cruise lines have started to welcome back passengers for U.S. sailings, where demand is outweighing supply, with many itineraries fully booked throughout the summer.

Carnival said bookings for upcoming cruises soared by 45% during March, April and May as compared to the three previous months, while Royal Caribbean recently announced that all sailings from Florida in July and August are fully booked.

Several coronavirus cases have been identified on cruise ships since U.S. operations restarted in June, testing the cruise lines’ new COVID-19 protocols, which include isolating, contact tracing and testing passengers to prevent the virus from spreading. Most ships were able to complete their itineraries without issues, but American Cruise Lines, a small ship company, cut short an Alaska sailing earlier this month after three people tested positive for the virus.

The industry’s turnaround is far from guaranteed. The highly contagious delta variant, which is causing surges of the virus around the world, could stymie the industry’s recovery, especially if large outbreaks occur on board. But analysts are generally optimistic about its prospects and the potential for passenger numbers to recover to prepandemic levels, perhaps as soon as next year. That optimism is fueled by what may be the industry’s best asset: an unshakably loyal customer base.

“The demand is there,” said Jaime Katz, an analyst with Morningstar. “You know that there have been 15 months of people who have had cruises booked that have been canceled.”

No U.S. Bailout for the Cruise Companies

By April 2020, the industry was in crisis. Cruises were halted around the world after the alarming outbreaks on ships, leading to sailing bans from the CDC and other global authorities.

While they employ many Americans, the major cruise companies are all incorporated abroad and were ultimately left out of the $2 trillion federal stimulus known as the CARES Act, with lawmakers chafing at the prospect of bailing out foreign corporations largely exempt from income taxes.

The timing couldn’t have been worse for Virgin Voyages, the new cruise company founded by British billionaire Richard Branson, which had planned to launch its inaugural ship, Scarlet Lady, with a sailing from Miami in March 2020. The ship’s official U.S. debut has been delayed until October, but a series of short sailings will take place in August out of Portsmouth, England, for British residents.

“It’s been a very difficult 15 months and we had to make some very tough cuts along the way like the rest of the industry,” said Tom McAlpin, president and chief officer of Virgin Voyages.

In the end, most cruise companies made it through the pandemic intact, but only after receiving help. That came in the form of assistance from governments abroad or money raised from investors emboldened by efforts to backstop the economy from the Federal Reserve and others. The cash wasn’t cheap, though. When Carnival Corp. sold $4 billion in bonds in April 2020, it agreed to interest on those bonds of 11.5% — more than half of which it recently refinanced at a more reasonable rate of 4%.

Carnival, which operates under nine brands globally, has lost more than $13 billion since the pandemic began and said in a securities filing last month that it expects those losses to continue at least through August. The company amassed more than $9 billion in cash and short-term investments as of the end of May — enough, it said last month, to pay its obligations for at least another year. It says it expects to have at least 42 ships carrying passengers by the end of November, representing just over half of its global fleet.

The industry faces a long road back to normal. Moodys downgraded ratings for each of the big three cruise companies during the pandemic and says it will probably take until 2023 for the major cruise operators to start substantially reducing their debt, which had nearly doubled during the pandemic.

The companies have also been caught up in a series of legal battles in Florida, the biggest base of operations in the United States, that has them sometimes allied with the administration of Gov. Ron DeSantis, and sometimes opposing it.

In June, Florida sued the CDC, saying the agency’s guidelines for how cruising could restart were burdensome and harmed the multi-billion-dollar industry that provides about 159,000 jobs for the state. The CDC guidelines require 98% of crew and 95% of passengers to be fully vaccinated before a cruise ship can set sail, otherwise the cruise company must carry out test voyages and wait for approval.

So far, the state has prevailed in the courts, with a ruling from a federal judge that prevented the CDC’s vaccine requirements from going into effect after July 18. A federal appeals court upheld that ruling on July 23.

Despite the court’s decision, Cruise Lines International Association, the trade group, said cruise companies will continue to operate in accordance with the CDC requirements.

Several other hurdles could also derail the rebound of the industry. While cruising has resumed, operators still have to contend with a patchwork of domestic and international rules, some of which impose strict conditions on passengers who go on shore excursions. A serious and widespread outbreak aboard a ship, or a broader communitywide surge in virus infections, could drive away potential customers and stall the momentum of the cruise comeback.

But despite the delays and potential for further disruptions, Virgin Voyages is hopeful for a successful launch of its new brand. Virgin’s Scarlet Lady adult-only ship, which was inspired by a superyacht design, aims to attract a hip and younger crowd, offering 20 different buffet-free dining options and a range of entertainment, including DJ sets and immersive experiences.

“We have a fantastic set of investors behind us, and I think we are well positioned to make a big comeback because people are ready to travel and cruise again and we are launching a very attractive new onboard product right in the middle of it all,” McAlpin said.

Two new cruise ships, Carnival’s Mardi Gras and Royal Caribbean’s Odyssey of the Seas are set to launch in the U.S. this week.

At a time when airports are busy and chaotic and hotels and holiday rentals are expensive and booked up, cruise companies hope to appeal to people who wouldn’t normally consider a cruise vacation.