Know more about the viral Japanese place where snow, sand, and sea meet

"One of the most incredible and beautiful images I have ever seen," a social media user commented, echoing the sentiments of several others 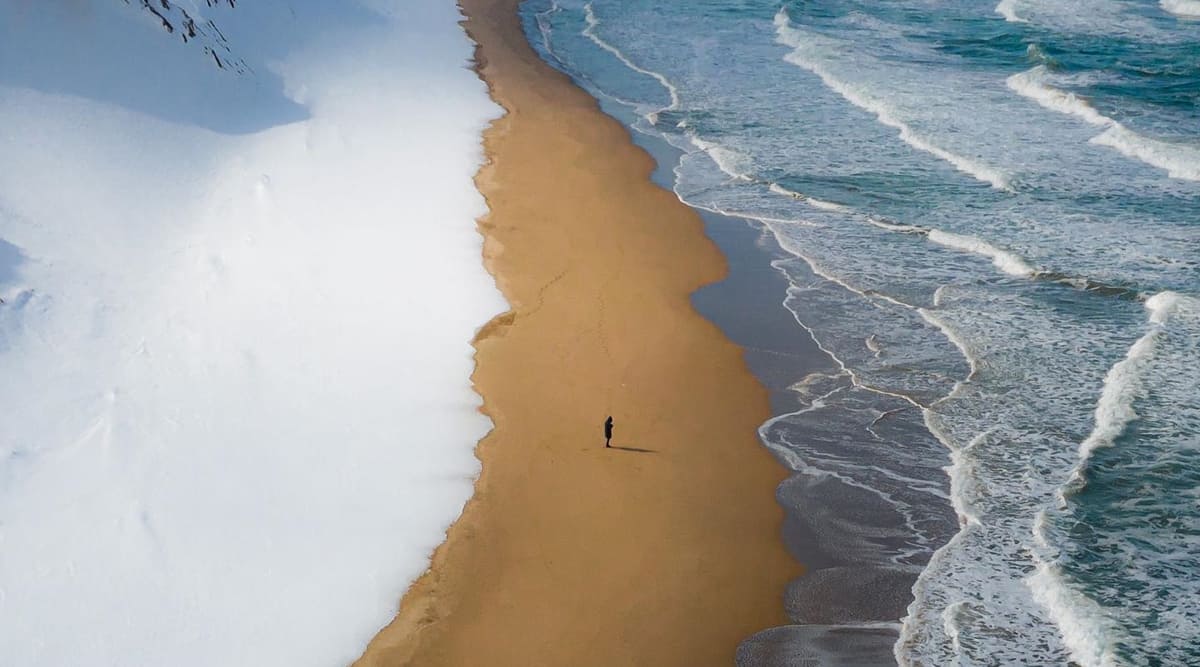 Would you like to visit this breathtaking destination? (Source: @ag.lr.88/Instagram)
Listen to this article
Know more about the viral Japanese place where snow, sand, and sea meet
x
00:00
1x 1.5x 1.8x

While some like the sound of waves crashing against the shore, others like to soak in the serenity of snow. On the other hand, many people find taking a quick stroll on a beach relaxing and rejuvenating. But, what if we tell you that you can experience all of these together in one place? Yes, you read that right! A stunning image from Japan, showing the confluence of snow, sand, and beach, has left everyone spellbound on social media. As shared by photographer Hisa on Instagram, one can see snow on the left side and sea on the right side with a person walking on a sandy beach, in between.

“A walk along the ocean shoreline. #Hello From Sea of Japan,” the photographer wrote, sharing the mesmerising picture. Take a look.

As expected, netizens were quick to flood the comment section, expressing their admiration and awe. While a user wrote, “This is heaven on earth”, another added, “Most perfect shot.” Yet another Hong Kong-based travel photographer Lee Mumford called it “absolutely insane”.

“One of the most incredible and beautiful images I have ever seen,” a user commented, echoing the sentiments of several others.

But, where is this place in Japan? Several users pointed out that one can spot this rare phenomenon at San’in Kaigan Geopark, which was declared a Japanese Geopark in 2008 and a UNESCO Global Geopark in 2010.

Located in the west of Japan and stretching from the eastern Kyogamisaki Cape, Kyoto to the western Hakuto Kaigan Coast, Tottori, this geopark is home to a diversity of geological sites related to the formation of the Sea of Japan. It has geographical features such as ria-type coasts, sand dunes, sand bars, volcanoes and valleys. Owing to this diversity, the geopark is home to rare plants like Pseudolysimachion ornatum, Ranunculus nipponicus, and Ciconia boyciana (Oriental White Storks). “It covers three cities, towns and prefectures with a population of about 400,000. As the region has experienced three large earthquakes, there are disaster-related sites as well, such as reconstruction heritage sites and fault displacement, which serve as disaster education material. In addition, local hot springs have long been appreciated as people’s health resorts,” according to en.unesco.org.

It also has many historical sites, such as tumuli and ruins that show the area’s prosperity from the maritime trade of the Sea of Japan.